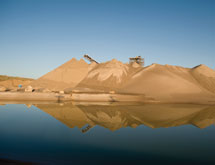 If there is anything that can help drive a business’s success, it is a company’s initiative to fulfill an unsatisfied need. That is what CEO Michael O’Neill says he has done with Preferred Sands. “[We responded] when others didn’t meet the demand,” he states.

The Radnor, Pa.-based firm specializes in frac sand and proppant products for oil and gas companies throughout the United States. “We do business with all the majors,” O’Neill says, adding that the firm also sells to clients in Canada.

Initially, O’Neill began his career in real estate. “We would buy old factories, renovate them and turn them into office buildings,” he recalls. “We went into these brownfield redevelopments for years.”

But, in 2005, O’Neill and his staff discovered that debt was causing many firms to close their doors. “We decided to sell that business,” he recalls, noting that he then chose to switch to his focus to mining. “It had parallels to the real estate business.”

While the company initially produced aggregates, it later concentrated on sand for frac mining when other firms were not focusing on that niche. “We focused a lot on customer service [and] the cost of customers not having their proppant when they needed it,” he recalls, noting that the firm today serves 110 customers and produces 4 million tons of sand annually.

In its services, Preferred Sands has focused heavily on logistics. For instance, ”We set up relationships where customers owned terminals,” O’Neill says. “[We can] get the product where there they need it, when they need it.”

The firm also hired people from outside the mining industry to improve its production process. Although a ton of sand only costs $50, any loss in the production area can be costly. The firm hired experts from the automotive and pharmaceutical industries to help with logistics and quality control. “It helped drive [us to] be a leader in the industry,” O’Neill says.

O’Neill adds that the company has won recognition from its customers. “I would say we are top tier to every one of our major customers,” he says. “Our business [is] about quality control and on-time delivery.”

Key Contributors
O’Neill is pleased with the team he has assembled at Preferred Sands, which includes Vice President of Technology Bob McDaniel. “[He] has been in the business for 35 years,” O’Neill says, noting that one of McDaniel’s contributions is a clean coating resin technology that is unique in the market.

Usually, when sand is used in fracking, O’Neill says, a resin coating will be used to hold the pieces of sand together. But when the pressure causes a fracture in the earth, it will take the sand with it and clog up wells. Some resins, he notes, will ensure the sand stays in the fracture, with the aid of an added chemical.

McDaniel’s resin, however, ensures that the sand stays without the extra chemical. “We have a clean system,” O’Neill states.

O’Neill also praises President TJ Doyle and Senior Vice President of Operations Bob Carter for their work on the firm’s operations side.

A New Focus
Preferred Sands now has the goal of becoming the No. 1 distributor of its sand and proppant products in the United States, O’Neill says.

To better serve its clients, Preferred Sands strives to integrate with the right rail and trucking companies so it can give its customers’ better rates. O’Neill notes that the company is working on a new terminals network that will not only give customers better predictability, but cut their lead times from two weeks to two or three days. “It’s a further movement along the line of having the logistics network that’s the best in the United States and Canada,” he says. “We see the opportunity to really deliver [more] value to our customers.” EMI