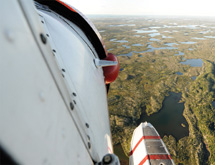 No roadways lead to Kiyuk Lake in Nunavut, Canada, where the summers are warm and winter temperatures average a bone-chilling 20 below zero F. Despite those rough conditions, the Prosperity Goldfields Corp. team endures both seasons in the hope that its explorations will lead to a gold mine.

Explorer and company President Adrian Fleming has been working in the mining industry for nearly 40 years. In that time, he has been fortunate to be a member of three different teams that turned mineral exploration into a mining project. “Once you have had a bit of exposure to a project that gets through to the point of being a mine, it’s addictive,” Fleming says. “I work for drill fixes. It gets the blood going and you want to do it over again. It’s such a blast.”

Prosperity Goldfields merged with fellow junior exploration company, Smash Minerals, in April 2012. The move brought Fleming and his team aboard to control the Kiyuk Lake project. The company is calling the Nunavut area the “best new gold discovery.” Fleming reports that exploration activity last winter found that gold results were strong with a demonstrated continuity of mineralization. Exploration at the site began in the summer of 2011 and will continue each summer and winter – if funding is available.

Funding Exploration
Traveling to remote Kiyuk Lake and exploring gold deposits are only possible for a junior exploration company such as Prosperity Goldfields if funding is available. This year, the struggling economy is causing them to come up short in raising funds as investors are tightening their wallets. Junior companies continually raise money and issue shares of the company in return, which dilutes the equity, Fleming explains.

“There is no money for junior exploration; gold and stock prices are down,” Fleming says. “To give an example, 18 months ago, Prosperity was trading at 66 cents and now it’s at 4 cents. What we are doing now is treading water.” Prosperity Goldfields is not exploring at this time in Nunavut because of funding but plans to keep the core team of five experts together and ready. Fleming hopes to see the market improve next year but says the downturn could last through 2015.

Even though exploration is at a standstill, Prosperity Goldfields continues to hold its exploration claims over the area. In preparation for a down cycle, the team exceeded its financial requirements over the past couple of years to maintain the claims. “We are in a very lucky situation,” Fleming explains. “We can do nothing for the next year or two and the claims will stay in good standing. We have done a lot of work so that we are ahead of the game and can tread water.”

To preserve funds Prosperity Goldfields does have, the strategy is to limit expenditures and stay focused on the company’s survival. “The junior space has been cyclical – there was a downturn with the global financial crisis in 2008; the one before that was in 1992 – there’s been a whole series,” Fleming notes. “It often comes back quite quickly. We will keep the team together and when things start to look better, put on our boots and our bug spray and we go back up north.”

Designing the Future
Over the next two years, Fleming says it would be ideal to spend about $10 million at Kiyuk Lake to conduct more geophysical testing, geotechnical sampling and drilling. He estimates the team could drill about 50 additional holes for that amount.

Today – if the market is stable – Fleming estimates an additional eight years before the team sees gold production at its mine on Kiyuk Lake. If over the next two to four years enough mineralization is found, Fleming says the team could begin to conduct a feasibility study for mine development. Conducting studies and attaining permits would take another three years and a total of seven years would pass before mine construction would begin. “If you look at other resource developments, such as oil, we move with a glacial pace,” Fleming says.

Exploration has always been a major part of Fleming’s life, and as he enters the latter part of his career he says he looks to inspire younger generations working on the site. “I really enjoy working with young people with whom I can share my passion and enthusiasm for exploration,” Fleming says.