Remora is an oil technology and service company, focusing on providing the international market with innovative solutions for offshore loading of crude oil. Established in 2002, the business is operational worldwide, trading from its headquarters in Stavanger, Norway.

In 2012, Remora agreed to sell the HiLoad dynamic positioning (DP) no.1, together with a ten-year contract with Petrobras, to Teekay Offshore Partners L.P with the return injection of equity by Teekay Corporation into Remora, becoming the main shareholder. The HiLoad DP had proven its capabilities in performing sea trials in a North Sea operation project in 2011.

The HiLoad DP was developed to revolutionise the offshore loading industry by providing DP capabilities to any tanker and reforming the crude export value chain. The core technology is built around Remora’s patented attachment system and the patented way of transferring fluid between two vessels at sea. All HiLoad products are equipped with suction cups and friction 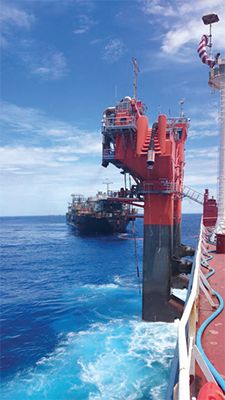 elements that are capable of transferring several thousand tons between the HiLoad and the connected object. The range of applications spans from offshore loading of crude oil, turret mooring of FSOs and FPSOs, to mobile propulsion or DP system for seagoing vessels, such as barges and floating rigs.

Following the commencement of a modification project in first half of 2013, the HiLoad DP no.1 was transported to Rio later that yewar. “Since early 2014, the vessel has undergone field testing in Campos and Espirito Santos with the test programme now coming to an end. Upon positive conclusion, the HiLoad DP no.1 will then commence on the time charter party with Petrobras. Significantly, in the past two years we have also finalised our research and development for the moored version for drillship (MVD) in the arctic area and concluded a conceptual design for the Arctic HiLoad MVD,” says Yngve Kloster, managing director. In 2013 Remora entered into an agreement where it gave Stena Drilling Ltd an exclusive right to use the HiLoad MVD technology for drilling units.

The company’s focus is on targeting the oil companies providing optimum solutions for exporting the oil directly from the field offshore to the market. “We have a unique and patented technology which provides a safe, flexible, cost effective and environmentally friendly solution for offshore loading directly to conventional oil tankers,” says Yngve. The technology is set to be a total game changer, facilitating direct offshore loading to conventional tankers without any modification. The specialised equipment to facilitate oil transfer and position keeping will be kept at the field and effectively utilised for offshore loading operations only.

The development of the technology began in 2000 with an idea of how to provide dynamic positioning and offshore loading capabilities to conventional tankers at the offshore fields without doing any modifications to the vessels themselves. After seven years of development and design Remora was ready to start the fabrication at Aibel Yard in Haugesund, Norway. One year later Remora became a finalist for the ONS 2008 SME Innovation Award, signifying the strengths of its design and engineering team. Without hesitation the HiLoad DP no.1 was launched to sea in 2009 before undertaking sea trials and a North Sea Operation project in 2011. With the HiLoad DP no.1 modified for Brazil operations, and transportation to Rio de Janeiro by tanker, the business began the immediate development of the basic design for the next generation HiLoad DP.

“We have noticed a firm interest for the HiLoad DP, also experiencing increased attention to the other concepts,” says Yngve. Remora is currently offering solutions for a broad range of vessels, systems and terminals within the oil and gas industry, including the HiLoad DP, HiLoad MV and HiLoad APU. The HiLoad MV is essentially a moored version of the HiLoad DP with the HiLoad APU providing an auxiliary propulsion unit by use of the basic HiLoad technology. BG Group awarded a FEED study for a new generation HiLoad DP, the HiLoad DP BR, in 2013. “The study has now been completed and the HiLoad DP BR unit will be able to handle VLCCs in 97-98 per cent of the weather conditions in Santos basin,” he adds. Basic design approval was granted by ABS in July 2014. Highly trained crew from TK and advanced on-board technology, such as the dynamic positioning loading systems, ensure safe and reliable offloading of oil from offshore installations in both deepwater and harsh weather environment, which makes the HiLoad a safe and cost effective offshore loading solution.

The generic features incorporate common design criteria for all tanker vessels of the world: flat bottom and straight sides. This creates a flexibility for the standardised HiLoad units: the ability to operate in any water depth, with any tanker of opportunity and on any oil field or terminal with no modifications required to the tanker. “The HiLoad DP concept offers the industry a safe, reliable and environmentally friendly offshore loading solution. Direct loading to export tankers means that only one loading operation is needed. Other alternatives will involve re-loading from shuttle tankers to FSOs/onshore terminals or from shuttle tankers to conventional tankers. For each loading operation, a considerable amount of the cargo will be lost due to emission of cargo vapour to the atmosphere.

“For oil to be exported over longer distances it is also an economically competitive solution on a cent per barrel basis. The HiLoad DP no.1 is currently testing the position keeping capabilities, emergency operations, oil transfer and logistic arrangements, technically performing full scale operations,” explains Yngve. Through the co-operation agreement between Teekay and Remora, the intention is that Remora will focus on technology development, marketing and project development while Teekay will own and operate the units.

“The agreement with Teekay gives us access to extended competence, operational excellence and project financing. The co-operation with Teekay Corporation also gives the ability to provide the market with complete solutions, not only the hardware. This will ultimately help as we focus on business opportunities in Brazil, specifically the Santos Basin. Further ahead, opportunities for growth in the near future exist in Brazil, West Africa and the Gulf of Mexico,” announces Yngve. Looking beyond to the next five years Yngve concludes on the vision that drives the company forward: “We aim to have established the HiLoad DP concept as the preferred solution for direct oil export from the offshore fields in Santos Basin, and to have developed opportunities in the regions of targeted growth.”