Skip to content
You are here:Home » Rodoverken AB
Insights 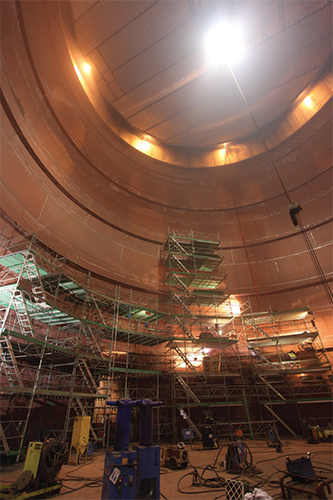 Founded in Gothenburg during 1944, Rodoverken AB has a long history in storage design and installation.

Its roots are naturally humble compared to the company Rodoverken would become, however when Rodolfo Arabella first began installing storage tanks for oil heating systems for domestic use, he was sowing the seeds for an industry-leading brand within industrial design and installation. Crucial to the company’s growth was the unique Spiral construction method that Rodolfo pioneered and that the company has refined ever since. Today Rodoverken’s legal name is Midroc Rodoverken AB and it operates as part of the Midroc Europe group, primarily serving clients within the Nordic region but with increasing focus further afield as emerging markets offer promising opportunities for expansion. Its business is largely split into two divisions offering storage tank solutions on one hand and pipeline installation and servicing on the other. Additionally, within each of these sectors Rodoverken is able to offer comprehensive aftersales and maintenance support for ongoing operations.

For many companies operating within Europe and the Nordic region, the onset of the financial crisis emerging around 2008 caused a significant decline in business. However, Rodoverken has not only weathered the storm but has also managed to grow convincingly in recent years. Under its current CEO, Magnus Dahlberg, the company has managed to more than double its turnover since he took the helm some six years ago. Reflecting on this Magnus comments: “I would say that we have been very flexible and that we have seen opportunities early on. So we have been able to move effectively into areas where we have seen our clients’ needs developing. We have a lot of experience in these markets and with two key areas; we are able to lean on one when the other is a little slow. That has been a strong combination to have.”

The intuitive nature of the company, which results from its years of experience, is complimented by the strength of its parent company as well its innovative Spiral Production method. As part of the Midroc group, Rodoverken is well supported and can rely on extensive in-house services that might otherwise prove costly to obtain. Its spiral design technique is an innovation that has proven beneficial to Rodoverken and it clients time and time again as it eliminates the need for time-consuming scaffolding and continuous heavy lifting. The technique involves the rotating of the tank from a single point so it turns almost like a screw. As it rises it can be welded at ground level so that the need for heavy lifting equipment is largely eliminated. This can be of enormous benefit where construction is taking place in tight spaces, as marketing director Fredrik Nilsson elaborates: “Sometimes a customer needs a big tank on a small site, which means it can’t be pre-built and transported, but has to be constructed on-site. With the spiral method the sheetmetal plates are welded in place from the same position at ground level, which requires only a small work area, and weather protection can be provided together with an optimum work environment. We’ve put a lot of effort into developing this method and it is something we are really trying to make the market aware of.”

A recent example of the spiral technique in operation is the highly successful installation of a storage tank for an LNG plant in Lysekil for Skangass. Having been heavily involved in the development of the LNG receiving terminal itself through its piping and engineering division, Rodoverken also provided the necessary storage solutions. The project was scheduled for completion in early 2014, however as of October 2013 the construction is complete and the terminal and supporting infrastructure are close to operational readiness. Commenting on the progress of the installation, project manager Maths Gustasson says: “We started the Skangass project about a year and a half ago in the middle of May. By January we began the construction of the tank itself using our Spiral construction technique, then during May we had started the internal piping and by July we had finished and begun pressure testing. This is a very good technique as we are able to work safely. We have very good safety accreditation and we make sure we carry out a risk evaluation at every stage so that we are able to minimise the dangers as much as possible.”

By being able to carry out projects efficiently, safely and ahead of schedule Rodoverken has earned a reputation as a reliable and trusted partner in the installation of storage tanks in the LNG market and other sectors including water, gasoline and other products. Because of this the company has a long list of satisfied customers including big names within the oil and gas industry such as ExxonMobil, Skangass and Statoil. Its recent work in Lysekil is one example of the growing list of references that Rodoverken is able to present to demonstrate its undisputed competency as it moves forward to win new contracts. Traditionally the company has been focused on Sweden and has enjoyed high volumes of work in Norway and while these will continue to be key markets for Rodoverken, it is committed to exploring new opportunities as the LNG market grows throughout Northern Europe.