Rotex’s industrial separation machines allow its energy, mining and other customers to do more in less space.

Rotex’s focus on developing and manufacturing industrial screening and separation machines that meet the needs of its customers has enabled it to grow significantly in the past 20 years.

“Our emphasis has always been on innovating our product line,” says Bob Dieckman, president of the Cincinnati-based company.

“We have responded to our customers by making significant changes to our product line. Because of this, we have seen tremendous growth from the year 2000 to today.”

Dieckman estimates the company’s revenues have grown more than 600 percent during this period. “We’ve had quite a bit of success,” he adds.

One example of the company developing a product line in response to a customer was in 2003, when it introduced its Rotex Minerals Separator. “We had a large customer in the potash industry come to us because they needed us to take a look at the footprint and output of our equipment,” Dieckman says. “That line is now the industry standard in mineral processing.”

The Minerals Separator is a multilevel separator featuring a stacked design that allows it to fit into small footprints. “This machine is designed specifically for the energy and mining industries, where many of our customers need more productivity per square foot,” he adds.

A large part of Rotex’s growth can be attributed to the rise of hydraulic fracturing, for which proppant and frac sand are needed. “When the frac sand and proppant boom came in and companies wondered how to get sand to the right size, we modified and tweaked the mineral separator we developed for the potash industry,” Dieckman says. “Those are by far the largest sectors we serve today – our Minerals Separator is well suited for the proppant and frac sand industries and offers a cost of ownership that is superior to all other products out there.”

A Preferred Provider
The company has 52 patents on its equipment, a testament to its ability to design and produce innovative products. In addition to the Minerals Separator, Rotex also produces the Rotex industrial separator, APEX industrial screener and MEGATEX XD Screener.

The Rotex industrial separator is the company’s original separator machine, which is still widely used in applications where screening media is not often changed. The APEX machine was introduced in 2006 as a more ergonomic alternative to the Rotex, as it features a side panel that allows screens to be changed in less than a minute.

The MEGATEX XD is a high-volume screening machine that, like the Rotex Minerals Separator, features a stacked design. 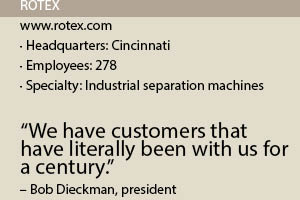 All of Rotex’s machines feature the company’s legendary gyratory reciprocating motion. This motion enables material to separate more efficiently by stratifying and segregating particles as they enter the machine, utilizing the full width of the screen. The equipment then conveys the material down the screen to lessen the burden depth.

“This motion is what makes our products unique,” Dieckman adds. “This, combined with the different array of equipment we have and our more than 100 years of application experience, provides us with our competitive advantage and make us the preferred equipment provider to the energy and mining industry.”

Standard but Custom
The company operates manufacturing locations in Cincinnati as well as in England and China. Rotex also has an office in Japan and uses partners in Canada and Bulgaria to help produce its machines. Rotex machines are sold throughout the world through a network of sales agencies.

The company’s application engineering group works with customers up front to determine their needs. This includeslooking at the specific application the machine will be used for, and then visiting the customer’s plant to determine which Rotex line is best suited for the operation.

The application engineering group will pass along information learned from their client visit to Rotex’s design engineering group, which will design a machine specifically for the customer. The product would then go into manufacturing. The company’s in-house manufacturing processes include cutting, bending, welding and assembly. It works with several suppliers who provide machining and electronic component assembly.

Rolling with Changes
Rotex’s growth over the past 20 years came during a period of significant change for the company. Founded in 1844, Rotex operated as a family-owned company until the early 1990s, when fourth-generation owner Jerry Simpson made several of the company’s managers co-owners as part of a succession plan.

The management co-ownership model continued until 2006, when Simpson decided to retire. The company then sought funding from Windjammer Capital, a private equity firm. The company was sold again in 2011 to Hillenbrand, a publicly traded industrial company.

“We went from being a private company to being private equity-backed to being a public company in a span of six years,” says Dieckman, who joined the company in 2007 as chief financial officer and has served as president since 2014. “For a 173-year-old company, that’s quite a bit of change in a short period of time.”

Hillenbrand has significantly invested in the company since the acquisitions. Recent additions to its manufacturing capabilities include new laser and plasma cutting machines. The company is also making improvements to the physical layout of its plants in Ohio, China and England, including added laboratories where customers can observe their material tests around the world.

Rotex continues to develop new products such as sanitary machines used to separate powders for the dairy industry. It also is seeking ways to improve its existing equipment. “We’re working all the time on finding ways to improve the throughput and productivity of our machines while fitting them into a smaller footprint,” he adds.

Doing What it Takes
Dieckman credits the company’s growth to Hillenbrand’s investments in equipment and staff, as well as Rotex’s management and service team. “Our team enabled us to take the business from what was a small, family-owned firm in 15 years to what is now a significant global provider of separation equipment,” he says.

The expertise and experience of Rotex’s staff have helped it gain repeat business from customers in several sectors. “Many of our customers continue to come back to us year in and year out. We have customers that have literally been with us for a century,” Dieckman adds. “When we get a customer, we tend to hold onto that customer, because our team will do what it takes to address their operational issues.”

Community Links
As the second-oldest manufacturing company in Cincinnati, Rotex maintains a number of long-established ties to the community.

The company has partnered with local high school DePaul Cristo Rey’s work-study program, which enabled students to work at Rotex a few days a week while attending classes. The company also partners with local charities to help support and grow its neighborhood. “We are committed to helping bring new business and employment opportunities to our city,” President Bob Dieckman says.