Great Yarmouth’s history of power generation can be traced back to 1894, when its first power station, which then used coal, was constructed. Though that facility was demolished in 1961, the Norfolk seaside town has retained a strong link to the industry, and today is home to a state-of-the-art, unflared 9F natural-gasfired combined-cycle gas and steam turbine power plant. Originally built for BP by Bechtel during 2000 and 2001, and fully commissioned in 2002, this well located, highly efficient and extremely flexible facility has a capacity of 398MW, which is enough to meet 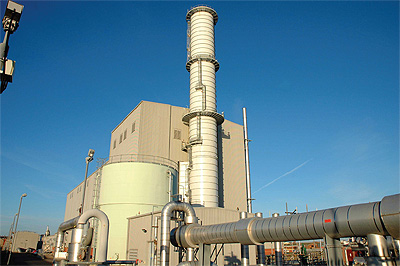 Life extension
In July 2005, the power plant was purchased by RWE Generation. Part of the wider RWE Group, , RWE Generation saw in Great Yarmouth the opportunity to add a significant generating asset to its portfolio, one that had some clear synergies with another of it plants located near Cambridge.

“Prior to our involvement with Great Yarmouth, the site had never really been the recipient of a particularly large investment such as a mid-life refurbishment, for example, and for the better part of a decade the principal aims of the site was the generating of MW’s and of income for the company,” explains Paul Haslewood, RWE Great Yarmouth Project Manager. “It was then, around 2013, that the plant started to become more marginal due to the challenging nature of the commercial environment, to the point where we initiated a ‘summer cold’ shutdown over the summer of that year, as we turned to a strategy of generating power when there was noticeable worth or value.”

A subsequent gas turbine component failure in 2014 then prompted RWE Generation to consider all short, medium and long-term options for the power station, The choices were limited power generation taking the plant through to closure, or initiating an upgrade programme to extend its life to 2026, and possibly beyond. The decision was made to follow the latter path.

“As fate would have it, it was in 2014 that we started to develop a closer, longer-term relationship with GE, the gas turbine designer and manufacturer,” adds RWE Great Yarmouth Station Manager, Ian Johnson. “GE came to us with a plan to put into action an Advanced Gas Path (AGP) programme, utilising 9F AGP Hot Gas Path technology, incorporating cooling and sealing enhancements, and advanced materials to allow for efficient operation at increased firing temperatures. Additionally, the AGP upgrade would provide improved heat rate and output in both simple and combined cycle operations, while the AGP components are capable of extended inspection intervals and replacement lives, providing us with options for the plant’s future beyond 2026.”

Successful upgrade
The total outage and upgrade project, which has seen the company invest approximately £30 million into the Great Yarmouth Power Station, took place between May 2018 and November 2018. During that time, there were 718 people safely inducted at site, with a total of 271,761 hours worked on the outage by station staff and contractors. As well as the major works on the gas turbine, the project also included steam turbine overhaul, HRSG projects, control system upgrades, cooling water bandscreens and auxiliary boiler refurbishment, and balance of plant overhaul work, followed 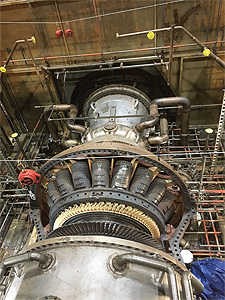 “The timeframe from RWE sanctioning the investment, to awarding contracts and ultimately delivering on the upgrade project was very short, with compressed project management and preparation phases, therefore it required significant planning from all parties involved to bring this work together,” Paul continues. “Add into the equation the restricted space we had to work within, close co-operation between ourselves, our people and our contractors proved invaluable, and the successful completion of the project represents a huge achievement for RWE Generation.”

The upgrade will enable the power station to continue to provide security of energy supply in what is an increasingly flexible energy market. Furthermore, the environmental performance of the station per unit of electricity generated will be greatly improved. It is expected that in terms of carbon dioxide emissions, the upgrade will lead to a reduce of approximately 180,000 tonnes over the next ten years of operations at current levels.

The new gas turbine was first fired on November 3rd, 2018, as part of the recommissioning phase of bringing the plant back into service, and at the time of speaking with Paul and Ian, in early December 2018, the formal performance test of the plant had been officially completed days earlier. “As things stand today, we have stood by the promises we have made to complete the upgrade of Great Yarmouth Power Station on time, and now our focus turns to running the plant effectively and delivering on the many benefits it will create,” Paul adds.

“The people who work on this site have put a considerable amount of time, effort and dedication into the outage and upgrade of the power station, and there can be no doubt that they are now very much deserving of a somewhat quieter life,” Paul muses. “While there is probably not anything like what used to be called a ‘job for life’ anymore, what this project does do is provide our people with some longer-term comfort that Great Yarmouth Power Station will be here for several years to come.”