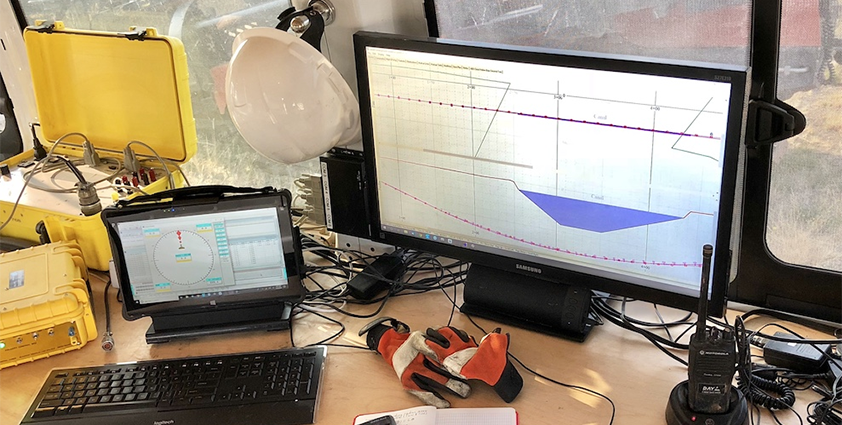 Savant’s wireless guidance system can boost its clients’ efficiency while helping them save money.

If there is anything companies continually strive for, it is savings. There’s a constant drive to boost efficiency while saving money and human resources. Savant Steering Technologies offers an innovative way to do just that when it comes to horizontal directional drilling (HDD), General Manager Sean Hogan says.

“We greatly reduce the amount of time it takes to drill the job in general,” he says. The Portland, Ore.-based Savant serves clients with a wireless, wireline guidance system that eliminates difficulties that would be incurred with traditional wireline systems, as well as maintenance costs and lost time. 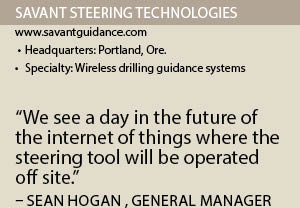 Hogan developed the first concept for the wireless system in 2011 after a lifetime in the industry. “Our first actual run with a prototype was in 2012, and we’ve been refining it ever since,” he says.

Operations Manager Dustin Jones adds that Savant’s system also provides the typical advantages of a wireline system over the walkover systems, which are used nearly exclusively on small and medium HDD projects. This involves a radio transmitter to help the operator steer a drill and determine the pitch and orientation of the bit. “But in environments of high magnetic interference or usually at depths exceeding 60 feet, they don’t work,” he says.

Hogan adds that the walkover system cannot record left/right data either. “There are always deviations from the bore path to the left and the right, and they won’t record that info.”

Because a wireline tool, which is used for most large drill HDD projects, sends information back to the operator through a physical wire spliced inside the drill pipe. “It isn’t constrained by depth like the walkover systems are,” Jones says.

“Two-thousand and 400 feet long and 300 feet deep is the longest and deepest commercial job we’ve done with our technology,” Hogan reports. “But in testing we’ve received a signal up to 18,000 feet away from a drilling rig.”

And with a wireline system, you read the Earth’s magnetic field which, along with the orientation and inclination information the tool already tracks, gives you an azimuthal bearing at the sensors along with having the capability of triangulating its exact position in three dimensions to within hundredths of a foot in most cases using the magnetic field generated by a known wire called a “coil,” that is placed along the bore path, Jones describes.

Today, traditional wireline tools are often used for river crossings or areas with heavy magnetic interference, but still have their disadvantages. “One of the most major problems with them is that the wire you send downhole with the tool can break or the splice between segments can wear to the point drilling fluid finds its way into the connections and shorts them out,” he explains. “Then you’re pulling out pipe and wire until you find the damaged section.”

This costs drilling contractors valuable time and money. Another disadvantage of the traditional wireline tools, Jones notes, is that they only fit in a single-rod drill. “[That] completely cuts out the market for double-rod drill rigs, which are vastly superior in terms of drilling the initial pilot hole due to the low flow rate of their mechanically rotated mud motors, which lower the risk of a frack out and take far less bentonite and water to run,” he says. “Our tool doesn’t have these problems. Once programmed for every specific job site locale, it sends telemetry data to the interface unit using the drill pipe itself as a medium, and due to this lack of a downhole wire, it will fit inside both single-rod drills and double-rod drills and operate continually for close to a month before a new power supply needs to be installed.”

Strong Savings
Jones says Savant’s system is innovative when compared to its competitors’ steering tools, which he says have not evolved much over the past 20 years in some cases. Savant’s technology, which is the only U.S. patented wireless guidance system for the HDD marketplace, offers the same or better accuracy and quality in the surveys it generates on top of eliminating the material, labor and time costs of sending wire down the drill pipe.

Savant’s steering tool provides a significant advantage for most of the HDD drills in the market, since operators are fearful of keeping the drill in the ground too long in case the wire breaks. “They can’t lose the signal to the steering tool before the pilot is completed or they’re tripping all the way out of the ground to fix the problem in most instances,” Jones says.

The wireless tool also saves users the labor and time they would have spent making connections on a wire line tool, Hogan says. “Those connections can take five to 10 minutes between drill rods to make and requires an additional two [to] three experienced laborers on the job site,” he says. “That can add up to a lot of wasted time and money.”

Doubling Up
Savant’s product is the only one of its kind in the world that will fit in a double-rod drill. These products include Ditch Witch’s JT Series All Terrain directional drills, which offer advanced electronics and a higher-capacity pump. “There’s untapped market potential for these rigs that our system brings,” Jones says.

Savant Steering Van Surface KitHogan agrees, adding that the use of double-rod drills gives its clients the chance to be greener in their operations. “If you look at pipeline projects that have happened in the past year, many of them used drills with mud motors and fluid that have lots of environmental issues because of formation fracturing,” he says.

Savant’s tool allows oil and gas companies to consider newer, more sustainable tech like Ditch Witch’s machine. “When you can do this with lower flow, there’s less environmental impact and less labor [needed],” he says.

Good Times
The business outlook for Savant is good because the growing global HDD market is expected to grow from an estimated $8.9 billion this year to approximately $22 billion in 2022. Currently, North America represents a third of the global market, with approximately $3 billion worth of projects planned for this year.

The largest markets for HDD projects are the telecommunications, electric, gas, water and energy industries. Today, the oil and gas pipeline sector comprises a large portion of Savant’s work, but the company also serves the water/sewer and telecom markets.

“Any kind of underground utility is HDD relevant,” Jones says, noting that the company recently did two bores in California for a water line improvement project. Although Savant has enjoyed success with the innovation, it is not resting on its laurels.

Instead, the company continues to look at ways to improve its system. For example, Savant is developing faster data streams to the tool as well as exploring ways to make the system smaller. “That will allow us to deploy it on smaller and smaller drill rigs,” he says.

Savant also is looking at ways to make its use simpler. “We see a day in the future of the Internet of Things where the steering tool will be operated off site,” Hogan says. “We’re trying to get to a point where we can do that because that market is so big. But that’s further out obviously.”

Another area of focus for the company is hiring additional technicians who are qualified to use the Savant system. “For the longest time, our goal was to adequately field-test the drill,” Jones says, adding that it has invested more than $3 million in testing, research and development. “Now that we know it works, it’s time to get it out there.”

By the Numbers
With an estimated 300 large single-rod and 500 large double-rod drills active in the large drill market, and more than 15,000 drills active in the small/mid drill market, Savant Steering Technologies’ system offers a unique opportunity for savings. Based on the company’s analysis, users of the single-rod drills in the large drill market would realize labor, cost savings and an incremental profit of approximately $325,000 annually.

End-users of the 500 large double-rod drills would realize savings and profits of about $150,000 annually, while end-users of the 15,000 small/mid drills would enjoy savings and profits of $90,000 per year, the company projects. This would result “in a total annual market cost savings/profit enhancement opportunity of $1.52 billion per year,” Savant says.