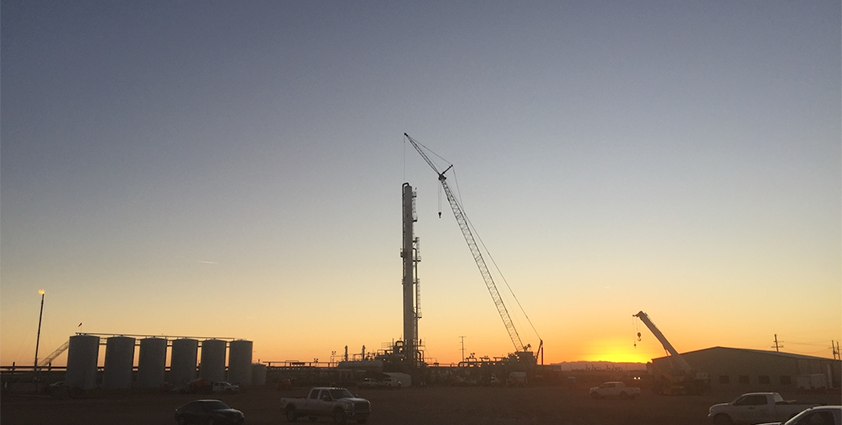 Sendero Midstream plans to invest up to $1 billion developing multiple cryogenic processing plants in the Permian’s Delaware Basin over the next five years.

Sendero Midstream was formed four years ago with the goal of investing in North America’s energy infrastructure for the long-term. After two years of analyzing all the conventional basins in the United States, the company kept coming back to the Permian’s Northern Delaware Basin in Eddy County, N.M., as the best location to build its Carlsbad gathering system, processing plant and NGL pipeline.

“This is where we want to operate,” President and CEO Clay Bretches says. “The Northern Delaware Basis is not as developed as the basins in the middle or southern parts of the U.S. are at this point, so we can get out ahead and provide a service that was much needed by producers. There weren’t enough high-efficiency, high-recovery gas plants, so we built Sendero’s initial high recovery cryogenic gas plant and the first NGL pipeline in the Northern Delaware Basin to meet the needs of our customers.”

Construction on the Sendero Carlsbad gas plant near Carlsbad, N.M., began in December 2016 and began operations in December 2017. The plant is designed to provide ultra-high recovery of NGLs from customers’ natural gas production along with the flexibility to reject desired quantities of ethane. Residue gas will be delivered into at least two downstream natural gas pipelines. During ethane rejection, the plant can maintain high recoveries of propane and heavier NGLs. 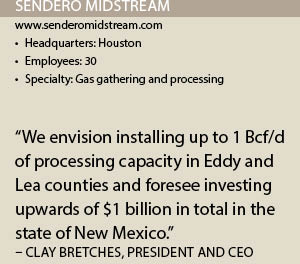 “We use Ortloff Engineers’ Supplemental Rectification with Compression technology that allows us to have the highest recoveries of NGLs regardless of what mode we are operating,” Bretches explains. “The plant is totally electric so we have virtually no emissions and don’t have much noise at all because the electric compression is so quiet. That’s something that’s really important to the community.”

The NGL Pipeline was built to deliver NGLs from the plant to connections with long-haul NGL pipelines that access the largest fractionation and marketing hub in Mont Belvieu, Texas. The 26-mile pipeline will be sufficient to accommodate Sendero’s initial 130 MMcf/d plant, a 220 MMcf/d expansion as well as NGLs from other processors in the area.

Laying the Groundwork
Now that Sendero’s first plant is fully operational, the company has broken ground on its second cryogenic processing plant that it expects will be operational by the end of Q2 2019. “We project the local gas production will drive the installation of a 220 MMcf/d processing plant every year for the next four years,” Bretches says. “We envision up to five plants in Eddy and Lea counties and foresee investing upwards of $1 billion in total, including the plant that is currently operating.”

Sendero has about 15 full-time positions in the area today and expects to hire north of 70 people by the end of the fifth year. During plant construction, the company hires about 150 contractors. “That has a big impact on the region,” Bretches notes. “For the 70-plus full-time positions we will have, the level of pay that we offer for highly technical positions is more than double the average New Mexico salary. This is a big deal and we are hiring locally.”

Investing in highly efficient plants is the only way Sendero would build. “Being as efficient as we are costs more, but it increases revenues of all those who are involved with us – the producers and the royalty owners, which includes the state and federal government,” Bretches says. “We built our plants in New Mexico, so when they levy taxes on property and equipment, that will go to New Mexico. We are keeping the tax base in the state where the gas is produced.”

Moving forward, Bretches says Sendero is “super excited” to expand in the Permian’s Delaware Basin and for the impact its plants will have on the local community. “We just think it’s a great recipe for success for us and the people who work for us,” he adds.