With a history dating back 125 years, Shipyard de Hoop has a long maritime tradition and has earned a reputation as one of the Netherlands’ leading shipbuilders.

The business was founded in 1889 in the village of Lobith, located on the east border of the Netherlands near Arnhem. The Lobith shipyard is situated on the river Rhine with a direct connection to the Rotterdam harbour and covers an area of 105,000 square metres, including the company’s head office and engineering office. The yard employs 140 experienced craftsmen and has a further 50-150 local contract staff available as well as a network of highly skilled contractors that the company collaborates with during periods of high workloads.

During 2007 the business acquired its second shipyard from the established and highly experienced Volharding Shipyards. Renamed de Hoop Foxhol, the yard covers 25,000 square metres, employs around 65 experienced craftsmen, and between ten and 50 dedicated local contract staff as well as local subcontractors. De Hoop Foxhol features a full range of state-of-the-art facilities, including slipway facilities for sideways launching to accommodate vessels up to 135 metres long and 16 metres wide, as well as a workshop for small steel work and prefabrication workshops. The two yards boast a combined quay length of 450 metres, which is bolstered by an additional 200-metre quay in Rotterdam. This additional quay space is mainly used in the outfitting of ships that have been built at the Lobith and Foxhol shipyards, making it an ideal location to add the final finishing touches to vessels.

During the past two years Shipyard de Hoop has remained highly active and produced a number of vessels for several industries, allowing the company to continue to grow despite volatile market conditions. “Our company has been through various developments during the past two years,” reveals CEO Patrick Janssens. “We have designed, built and delivered a series of newly designed offshore work vessels for several applications for international clients. During 2012 and 2013 we built four river cruise vessels, these luxury cruise ships have ensured continued work during the worldwide credit crisis and the fact that we are able to design and build various types of vessels has been highly beneficial. 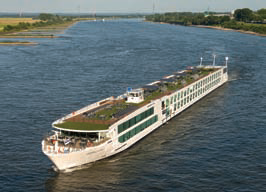 “We are currently in the final stages of building a next generation platform supply vessel (70 x 16 metre), which we designed and built for Delta Logistics of Trinidad. We have also designed and are building a new river cruise vessel for Leuftner Reisen from Austria. This will be the 11th ship we have built for this customer over the last 13 years, with the previous vessel, the Amadeus Silver, becoming the cruise ship of the year in Germany.”

While financial issues may have caused oil and gas projects to stall throughout 2012 and 2013, the demand for product has always remained high. Anticipating the resurgence of operations as soon as 2014 and 2015, Shipyard de Hoop continued in the development of innovative designs for offshore support vessels. During July 2014 the first of its fast supply intervention vessels (FSIV) departed the Lobith yard in the direction of the Noordzee to begin sea trials. Custom designed by de Hoop to strict environmental control, the hybrid diesel-electric powered 55-metre FSIV2000 is constructed primarily for low fuel consumption. “This new hybrid propelled designed was initially developed for a client that operates in the offshore oil fields in Mexico,” Patrick elaborates. “From a technical point of view these vessels are designed for worldwide service, so they can be used in many areas. Whereas initially fast supply vessels are designed primarily for the transport of people to offshore platforms or other offshore destinations, the vessels can also be used in anti-piracy operations, as ferries, wind farm servicing, as well as for other offshore installations as well as a supply vessel. As a result we now have enquires from all over the world, varying from the west coast of Africa to the North Sea area.”

The de Hoop FSIV2000 features an in-house designed hybrid propulsion system, which provides fuel savings of around 40-50 per cent compared to other vessels on the market. Furthermore the vessel is designed to be able to reach its top speed when fully loaded, which is something normally only possible on other ships when empty. The FSIV also features a robust all-steel hull that retains the benefit of light construction through the innovative high tensile steel. As a fully in-house product, Shipyard de Hoop is able to deliver FSIVs with a full range of bespoke options, as Patrick explains: “We design, engineer and build our vessels, which means that everything is possible. Some of the options often discussed with clients include upgrading from DP1 to DP2 FiFi installation and for example, adding ballistic protection or converting the seating area into extra cabins. We also have versions of this design with the accommodation placed further forward or with completely different dimensions.”

Further to the successful sea trials of its FSIV2000 design, De Hoop is soon to launch a 68-metre offshore support vessel (OSV) for Awaritse Nigeria Limited. The vessel will be delivered in unrivalled time for an OSV of this quality and will handle a product called ‘Transmix’ in a special process offshore Nigeria. Commenting on how the rapid design and delivery of the vessel was made possible Patrick says: “Our engineers had to design something that holds the middle between a tanker and a PSV to very specific requirements. There were a lot of contradictory rules and regulations, which have made this innovative design a real challenge. Our yard is focused on special projects and sometimes what makes a project special is a short delivery time. Some examples of this include the 440 person accommodation barges that we built in 18 and 22 weeks, including engineering. Other projects are made interesting because of the new technologies and innovative features involved, this project has both making it the ultimate challenge.”

Shipyard de Hoop is gearing up for a large celebration at the end of the year as it reaches its 125-year anniversary. The company has strong order books including a recently awarded tender to build ten PSVs for Abu Dhabi National Oil Company, meaning that it will remain busy for some time to come. Commenting on the future of the business Patrick concludes: “Right now we are focussing on various niche markets, which we expect to grow in the near future. By understanding our clients’ needs and surprising them with new and innovative design ideas, we hope to increase our customers’ earning power, and with this to continue our long-term relationships with them.”