Established in Lorient, France in 1989 SLCE Watermakers specialises in the manufacture of desalination and water treatment equipment using the reverse osmosis process.

During the early days of the company’s history it was focused on the pleasure boat market in France, producing a range of desalinators with a capacity of under ten m3/day. Later, as the company became increasingly successful it began to supply its products to the export market.

As SLCE entered the later half of the 1990s it was in a position to diversify its range and expand further in new areas. During this time development was directed towards the naval defense markets in its native France and abroad, as well as into the Mediterranean and Middle East. These areas brought with them demands for equipment that could operate at higher capacities and as such, the SLCE product portfolio evolved progressively to reach capacities of up to 250 m3/day.

By the 2000s SLCE had established itself on the world stage with a highly positive reputation and a presence in many regions throughout the globe. During the early years of the new millennium the company continued to develop its focus and incorporated a strategy comprised of three complementary areas. Its range of desalinators and water treatment equipment was further enhanced to exceed capacities of 750 m3/day, which allowed the company to enter into segments for land-based installations as well as much larger vessels. On top of this, a branch of products was introduced that included an energy saving device that resulted in the saving of an impressive five kilowatt 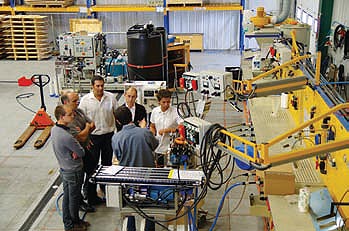 hour per m3 of treated fluid.

In tandem with the continued evolution of its desalinator range, SLCE also commenced commercial deployment within the Asia-Pacific zone. During the following years, the region would remain a key strategic area of the company’s development. The third strand of its strategy throughout the 2000s was the return to the pleasure boat market. This was thanks in part to the introduction of the new Aqua-Base range of products, incorporating energy efficient systems as well as the strong reputation and experience that SLCE had earned in previous years.

Today SLCE offers a comprehensive portfolio of equipment that covers capacities that ranges from 30L/h to around 1500 m3/day. The company boasts one of the broadest collections of products on the market, which allows it to operate within a diverse spectrum of sectors. Its marine market includes applications for boating and yachts, merchant vessels, cruise ships, oil and gas, offshore and naval vessels amongst others, while SLCE products have also found applications in land based operations such as municipalities, hotels, holiday camps and industrial areas. Commenting on its broad market coverage and the benefits of this presence, SLCE president Gilles Gury says: “The SLCE standard range of products is made up of multipurpose equipment. Actually, having a business that is active in many sectors enables us to receive feedback from a wide sample of very demanding customers, which ultimately helps to make our products efficient and reliable. In addition to this, the company’s design office develops and adapts our standard equipment to meet the specific specifications outlined by the client. Because of this dedication we have already had many customers within the oil and gas sector including Total, Perenco, CNOOC, Bumi Armada, Bourbon, McDermott, Great Offshore, Keppel and many others.”

The company’s far-reaching market footprint has proven to be a great strength as well as a financially rewarding strategy in the face of the volatile market created by the global economic downturn. “After the 2008 crisis the segment of the marine market linked to leisure or transportation of goods has been very quiet,” says Gilles. “Only the navy and oil and gas markets have remained very active. Fortunately, based on the economic development of booming areas like Asia and Brazil, the marine business has now recommenced a growth trajectory.”

During 2013 SLCE experienced a significant growth in its turnover based largely of the development on its export market, which accounted for 85 per cent of its total earnings. The Asian market was particularly buoyant, providing 40 per cent of the export business that SLCE enjoyed throughout the year. As it moves into 2014, the company is showing no signs of slowing down and is gearing to further develop its strategy in Asia as Gilles elaborates, “The permanent focus of the company is to improve product and service quality. From a market point of view, it will focus on the offshore sector and Asia as key areas of its development strategy. SLCE has several opportunities in Malaysia within the offshore sector, which should turn into firm contracts very soon. In Croatia, the focus is on the leisure market including hotels and pleasure boats.”

By building on the success generated by the company during the proceeding years, the future of SLCE promises to be very bright indeed. The positive financial results of 2013 for example, will allow SLCE to continue to invest permanently in its research and development sector to bring new bespoke products to market. Its team of 30 reliable and experienced staff, incorporating seven engineers and eight technicians are on hand to lend their support to both the company and its clients. Finally through its modern fabrication facility and through trusted agents throughout the world, SLCE Watermakers is able to deliver world-class products, technical documentation and training wherever they are needed.