A star is born

It was in 2008 that SOCAR (State Oil Company of Azerbaijan Republic) first commenced operations in Turkey, following its acquisition of Petkim, the country’s only integrated petrochemical facility. The acquisition represented further proof of the centuries brotherhood between Turkey and Azerbaijan, and in the time since SOCAR has worked to add significant value to their respective national economies by becoming one of the major production powers in the region.

Established as a result of an investment value of approximately $6.3 billion, STAR (SOCAR Turkey Aegean Refinery) Refinery stands as a vital link in the integrated investment chain realised by SOCAR in Turkey. This investment was partially financed by loans under a successful project finance deal, which won a number of awards, including ‘The Best Project Finance Deal of the Year’ award by reputable international organisations. Built across a 2400-hectare site on the Aliaga Peninsula, construction of the refinery began in 2011 and involved the use of 250,000 tonnes of steel, 5400 kilometres of power cable and required an area of over one million square metres to be painted. At its peak, more than 3000 engineers from 14 different countries served on the construction of the refinery, and it is estimated that the total number of people employed reached almost 19,500.

Official opening
The refinery has the capacity to process 214,000 barrels of crude oil per day, and will also produce petroleum products including LPG, naptha, reformate, xylene, jet fuel, diesel, sulphur and petro 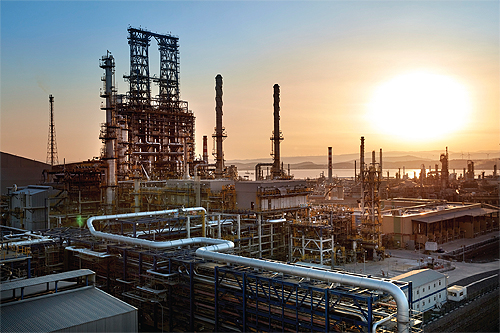 coke. Having received its first crude oil from Azerbaijan in August 2018, and following the successful commissioning of its various units, STAR Refinery held an international opening ceremony on October 19, 2018, with the Presidents of both Turkey and Azerbaijan in attendance.

“The Turkish economy achieved an average annual growth rate of more than seven per cent from 2010 to 2017, and in parallel with this the rate of consumption in petroleum products increased by around four per cent,” explains Mesut Ilter, General Manager of STAR Refinery. “STAR Refinery will be able to meet 25 per cent of Turkey’s need for processed petroleum products, and with a diesel production capacity of 4.8 million tonnes it will lead to a substantial decrease in the country’s import rate of this product. Additionally, the refinery will also produce large quantities of those products that are strategically important in contributing to the country’s economic growth, for example 1.6 million tonnes of jet fuel, which will help to meet the demands of the Turkish tourism industry. In general terms, STAR Refinery will help reduce Turkey’s foreign trade deficit by around $1.5 billion on an annual basis.”

Mesut Ilter and the rest of the SOCAR team project that STAR Refinery will reach full capacity in 2019. “At present, Turkey has a total annual refining capacity of around 25 million tonnes,” Ilter states. “After STAR Refinery begins to operate to its full potential this will increase by as much as 35 per cent! As one of the major energy projects found in Aliaga, Izmir, not only will we be responsible for producing the strategic petroleum products that Turkey has been reliant on foreign sources for previously, we will also increase its competitive power across the global energy market through our technological prowess for processing different types of crude oil and our storage capacity. Furthermore, we will create significant employment opportunities, thus allowing the refinery to assume a substantial role in the socio-economic development of our country, especially Aliaga, Izmir and the Aegean Region.”

Connected systems
As one of the newest refineries to be built anywhere in the world, STAR Refinery naturally boasts many cutting-edge technologies that will allow it to meet its processing targets. “Thanks to the high conversion capability of the refinery, it is able to convert crude oil not only into petrochemical raw materials, but also highvalue white oil products,” Ilter adds. “STAR Refinery was designed with Industry 4.0 and the best industrial practices in mind, and our goal was to create both a ‘Connected Refinery’ as well as a ‘Digital Refinery’ by means of an integrated infrastructure where all processes and systems are interconnected.

“Moreover, we have consistently looked to apply ‘Best Available Techniques’ to our activities, utilising economically-applicable and locally-accessible technologies that we feel best preserve the integrity of the environment in the best manner. Our environmental performance principles are not strictly limited to local regulations, but are also in compliance with the International Finance Corporation (IFC) performance standards that set the international environmental management principles across all industries.”

As we move into 2019, STAR Refinery will push on with its core aim of providing highly important contributions to the economies of both Turkey and Azerbaijan. “Our primary goal is to ensure that we reach our full capacity securely in early 2019, and we have continued to make significant investments, such as the $400 million expansion of our storage facility in Aliaga in order to make that a reality,” Ilter states. “Having an ever-growing and dynamic economy, Turkey’s needs for energy and raw materials increase steadily as investments continue to be realised. As such, going forward, we will attach ever-greater priority to expanding our own investment in line with the future needs of the country.”