Stanford Marine Asia is a vessel owner and charterer operating in the South East Asia region.

It is part of Stanford Marine Group and was established in 2010 as part of the group’s ongoing expansion into new geographies. The group has four other support offices located in Doha (Qatar), Abu Dhabi (UAE), Mtwara (Tanzania), and Khafji (Saudi Arabia), as well as its headquarters in Dubai (UAE). A fleet of 41 vessels, controlled by these offices, serves the global oil and gas industry with Stanford Marine Asia currently operating three in South East Asia.

“Our core business is chartering,” begins marketing manager Kelvin Lee. “Primarily, we charter vessels out of the Middle East, Africa, and South East Asia, with the majority of Stanford Marine’s vessels operating in the Gulf Region itself. Secondly, we do a lot of cross-chartering, which means we charter vessels in from other owners and regions to the Middle East. Thirdly, we provide vessel management for owners who desire to operate in The Arabian Gulf but don’t have the expertise. In Asia we have vessels operating regularly in the region and charter them out to clients ourselves.”

Nonetheless the total pool of 41 vessels ranges widely in application. Both DP and non-DP platform supply vessels (PSVs) are available alongside anchor handling tugs (AHT), anchor handling tug supply (AHTS), supply vessels, fast crew boats, utility vessels, and crew boats ranging in size from 33 to 87 metres. The two 87 metre PSVs were delivered in early 2012 and are equipped with diesel-electric propulsion and a 5000 DWT carrying capacity; both were brought in to provide a radical disconnect from the smaller tonnages that the pool had previously possessed. For Stanford Marine Asia it means there is even greater flexibility in what it can offer clients.

“We try to select vessel types that we think will be most suitable for the Asian environment,” Kelvin explains. “One of the likely candidates that we can bring over from our fleet in the Middle East is our Fast Support Vessels (FSV). They have an aluminium hull, can travel up to 25 knots, carry 58 passengers, and have a deck capacity for carrying small amounts of project cargo. FSVs were selected from Stanford Marine’s diverse pool due to the relatively small number currently available for charter in South East Asia, thereby providing added value to charters. We are expecting two more units of mid-sized PSVs and possibly one large PSV to be acquired in 2013 that I hope will be coming to Asia. We continue to look at acquiring ships that will suit the Asian environment, particularly in deep water sectors.” 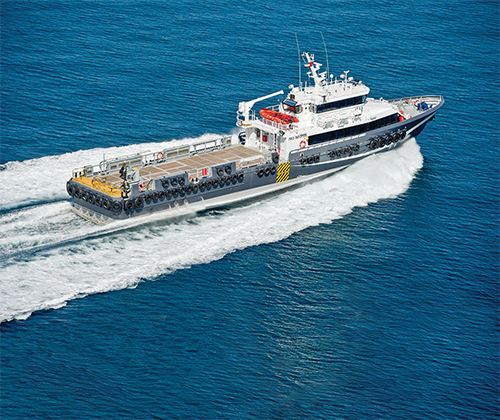 As the marketing manager goes on to highlight, the last 12 months have been very successful for Stanford Marine Asia: “In the course of 2012 we have entered into two new territories: namely Myanmar and Peninsular Malaysia. Malaysia is one of the most exciting markets as we have seen oil majors carrying out exploration there as well as subsea works and offshore construction. The country has been very active for the last five years. Myanmar, meanwhile, is now beginning to gear up its deepwater oil and gas activity and we are happy to have gained entry in the market right at the beginning. The company has demonstrated in a short period of time its high standards of operation and keen approach to continuous improvement.”

To build on its track record of quality and reliability, Stanford Marine Asia is hoping to benefit from the group’s aggressive new building programme that saw the introduction of twelve vessels into the fleet over the last two years. To be delivered next year (2013) are two more PSVs namely – Stanford Hawk and Stanford Eagle, 75 metre DP2 PSVs that feature diesel-electric propulsion. Harsh weather conditions during monsoon season in the region make DP functionality essential, whilst the choice of fuel efficient and space-saving propulsion will appeal to the majors now breaking into the market. As its business grows, however, the branch looks forward to bringing new and more advanced vessels into its fleet.

Kelvin discusses what difficulties and potential the future holds for Stanford Marine Asia: “There will be challenges ahead, most notable in markets that are building up their local contents. Indonesia, for example, has started to impose their cabotage law with Malaysia following suit. We are taking necessary actions to comply with these regulatory changes. On another note, oil prices are high and demand for offshore production has been increasing since the last financial crisis. In this quarter alone we have received numerous invitations to bid for long-term charters in both shallow waters as well as deep water and believe we will be able to successfully capitalise on these opportunities.

“Asia Pacific is at the top of the list in terms of offshore field discoveries and potential field development in both shallow and deep waters. These chained events ultimately result in an increasing appetitive for OSV tonnage absorption in the region. As such, in three to five years, we would like to see Stanford Marine Asia being established in major offshore markets such as Malaysia, Indonesia, and Brunei with a pool of vessels that will not only service the shallow water but also partake in the deep water sectors. Our goal is to let regional oil majors and other stakeholders associate our brand name with qualities of high operating efficiency, well-built vessels, and excellent HSE standards.”