For the past 60 years, the Stanlow Manufacturing Complex in Ellesmere Port, North West England, has been fuelling the UK’s energy requirements. At its heart is the Stanlow Refinery, which is operated by Essar Oil UK and today supplies approximately 16 per cent of all of the UK’s road transport fuels.

In an ambitious and strategic move to ensure that the Complex will continue to fuel the country for many years to come by transforming it into a Sustainable Energy Hub, the decision was taken by Essar to establish Stanlow Terminals Ltd (STL) in January 2020. This new business entity owns and operates all storage facilities within the Stanlow Manufacturing Complex, 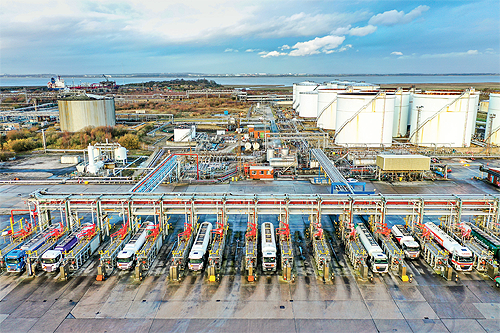 supporting both the Essar Refinery and third party businesses. Foremost amongst its goals is to attract partners like Fulcrum Bio-Energy to develop sustainable advanced fuels, to create more highly skilled, highly paid jobs, and to repurpose existing storage assets to store, transport, import and export renewable fuels, Hydrogen and CO2.

“The opportunity to establish STL was born out of the fact that there is a massive amount of critical national infrastructure here,” begins its Chief Executive Officer (CEO), Mike Gaynon. STL operates two site locations, one being a deep-water terminal at Tranmere, which receives some of the largest vessels in the world via the Irish Sea, and the other found along the banks of the Manchester Ship Canal. The latter provides excellent multimodal connectivity, enabling efficient, sustainable distribution of fuel around the UK. The business can also call upon reliable road, rail and water links, along with connection to the UK Oil Pipeline (UKOP) and Manchester Airport Jet Pipeline.

The storage facilities at Stanlow have previously been operated as a captive market to serve the refinery. Now, the longer-term vision is to convert these into what is essentially a third party, bulk liquid storage terminal. “Due to the capacity that we possess here – approximately three million cubic metres of storage space, holding everything from LPG to crude, biofuels, bitumen, petrochemicals and more – what we have at our disposal in Stanlow is not only the largest bulk liquid storage asset in the UK, but also potentially a world scale storage terminal,” Mike continues. “So, it is a significant facility with development land, and the opportunities to utilize and repurpose it have been the driving force behind the carve out of the business.”

With over 20 years of experience within the sector, holding senior roles globally with the likes of Essar, Shell and SGS, Mike himself took on the role of CEO of STL in July 2021. “Ultimately,” he says, “the number one goal that I have been tasked with delivering is to develop third-party revenue for the business. At the same time, one of our biggest sub-tasks – as it were – is to continue what we refer to internally as our ‘journey to independence’. In simple terms, that means operating separately from Essar in totality. For instance, at present, we have a number of long-term contracts – including those for operations and maintenance – that exist between the two parties, and we are planning to transition these over to STL directly in the coming months.”

Further still to STL’s development of third party business and its pursuit of independence, it is also striving to play a fundamental role in the UK’s drive towards achieving net zero carbon emissions by 2050. For its part, in late 2020, STL set out a number of ways that it – and the wider Stanlow Manufacturing Complex – would be supporting the UK Government’s ‘Ten Point Plan for a Green Industrial Revolution’. “The key projects that we like to highlight include our involvement through Essar with the HyNet North West development, which is driving the growth of low carbon blue hydrogen, and investing in carbon capture, usage and storage, and our efforts to support the manufacture of sustainable aviation fuel in partnership with Fulcrum Bio-Energy to meet the Jet Zero Council goals,” Mike states.

STL is also planning to be a major contributor towards the increased uptake in sustainable transport fuels. One of the ways it intends to do so is through the creation of the STL Biofuels Hub, a new facility that will store, blend and distribute existing renewable and future advanced biofuels for use as replacement transport fuels for road, marine and aviation applications. “There is a big push at present in this country to increase the quantities of biofuels being blended into products such as gasoline, diesel, and jet fuel,” Mike adds. “This will only become more pronounced as legislation is updated in the coming years that will mandate a higher percentage of renewable and sustainable materials is used in the creation of new fuels.”

Turning the topic of conversation to the subject of what Mike also considers to have been highlights for STL in the 18 or so months since the business was formed, one of the most notable for him was it achieving ISO 45001 accreditation. “This accreditation, as most of your readers will probably know, is for Health & Safety Management, and is awarded following a comprehensive external audit that verifies that one’s health and safety and environmental management system meets the high requirements of this standard,” Mike explains. “Gaining this accreditation was 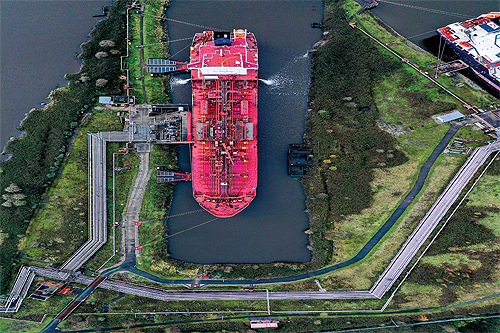 a particularly big target for the business, because – again as anyone within our industry will attest to – safety is and always will be our top priority, and forms the foundation beneath everything else that we do on a day to day basis.”

The awarding of ISO 45001 status is even more notable given that STL is also responsible for operating an Upper Tier COMAH site. “What that means in layman’s terms is that we hold all of the permissions and permits necessary to operate what are commonly referred to as High Hazard Sites,” Mike continues. “As you can probably imagine, amongst the three million cubic meters of storage capacity at our disposal, there within sits a huge inventory of hazardous materials – from flammable oils to petrochemicals – and we are proudly able to demonstrate through our ISO and COMAH status that we can handle these in the safest possible manner within a highly regulated environment.”

It is worth emphasizing again at this point the monumental achievement Mike and his team have made in making the carve out of STL from Essar such a success in a relatively short period of time. “As you will appreciate, this would be a relatively challenging objective to accomplish at the best of times, but even more so when you are looking to align a business that has operated from its location for over half a century,” he details. “Therefore, a lot of the work that we carried out over the course of STL’s first year in operation revolved around setting it up for a bright, independent future.

“If anything, however, what the last 12 to 18 months have demonstrated and reaffirmed for us is the sheer resiliency of the business model that we have created here at STL. Ours is one that is effectively built upon long-term ‘take or pay’ contracts – inflation-linked – that provide capacity and services to Essar’s refinery business and third party customers. As we have designed it in this way, it gives us a very stable cash flow and provides us with a significant, fixed element of revenue.”

The significance of that last detail has come to the fore especially so in light of the Coronavirus pandemic and its impact on industries across the globe. “Covid-19 clearly had a big impact upon our business, not least of all because the throughputs across our facilities were significantly down compared to what our business plan originally factored in for 2020,” Mike comments. “However, even with the dip that we experienced, we managed to minimize the impact on our financial performance, while also being able to announce things such as heads of terms with different customers. These are very much deals for the future, and while they won’t result in third-party revenues today or tomorrow, they will bring financial benefits to STL as various new projects come on stream in the coming years as the world emerges from the pandemic.”

As we all know, the energy industry is changing at pace, and as more and more innovative ways of generating sustainable energy are conceived and developed, the supporting storage and transportation infrastructure for energy needs to evolve as well. In talking with Mike, it is clear that STL is primed to lead a national charge in the development of changing energy infrastructure, and to create what will ultimately become the UK’s first sustainable energy hub.

“It has been said before, but it bears repeating, that everyone involved with STL and the wider Stanlow Manufacturing Complex is incredibly proud to be associated with a location that has been providing energy products to customers across the UK for the past six decades, and together we have a shared vision to make sure that this location has the infrastructure necessary to supply new energy products for the next 60 years and more,” Mike concludes.