Operating as a subsidiary of ENGIE (formerly GDF SUEZ), Storengy develops and operates underground natural gas storage sites within France, Germany and the United Kingdom. Storengy is regarded as a leading player in its field and operates one of the world’s largest networks of facilities. With nearly 60 years experience and a total storage capacity of 12.2 billion cubic metres, Storengy designs, develops and operates different types of storage facilities recognising the geological opportunities and market needs. It provides its customers with innovative products through its experience in offering sales & marketing services on various markets and their relevant regulatory environments.

Storengy UK represents the interests of Storengy within the UK and since 2007 the company has been working on its inaugural Stublach Gas Storage Project (SGSP) in rural Cheshire. Once fully completed, the scheme will be one of the main storage facilities in the country and will enhance the security of supply to the UK market. Once the site has been fully developed it will encompass a total of 20 caverns, the first two of which became operational in 2014, with the remaining cavities expected to be fully developed by 2020. To date five salt caverns are currently operational, with a further five due to come on stream early in 2016. Storengy UK presently operates 100 million cubic metres of natural gas in the caverns and by 2020, it is expected that the total storage capacity will reach 400 million cubic metres. Due to its impressively high injection and withdrawal rates, the site can offer flexible services along with fast cycling products, allowing users to churn their gas many times during the year. 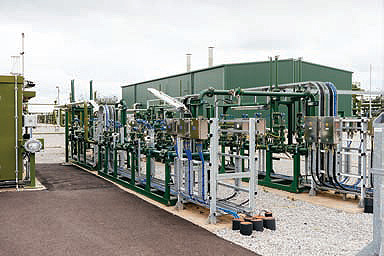 The commencement of commercial operation of the first two caverns at the Stublach Gas Storage site took place in September 2014. As one of the most flexible facilities within the UK, the Stublach site will increasingly offer an efficient way to mitigate gas supply risks and respond to market needs. Commenting on the start of commercial operations at Stublach, Charlotte Roule, Managing Director, Storengy UK, said: “This is a major step for the Storengy teams, whose continuous commitment was key and for which I would like to pay tribute to. Thanks to their professionalism and determination, we are now able to provide new services to the UK market. Despite the current challenging market conditions for storage, Storengy has continued its investment in this strategic project. With the start of its commercial operations, the Stublach gas storage site offers greater security of supply to the UK and will help to respond to the increasing flexibility requirement in the UK energy market.”

The Stublach site was officially inaugurated a little under 12 months ago, during November 2014 and has since continued to enjoy successful operation. Lord Deighton KBE, then Treasury Minister, and Jean Claude Depail, Executive Vice President in charge of the Infrastructures Business Line of ENGIE, opened the facility in a highly publicised ceremony during which they commented on the importance of the development to both Storengy as well as the UK. “Energy security is central to the government’s long term economic plan, and we are focusing on investing in infrastructure to achieve this. Sites like Storengy at Stublach play a crucial role in our energy security strategy, allowing gas suppliers and others the flexibility to store gas safely in preparation for when demand is high, or when other supplies are restricted. I am delighted to open the site today,” Lord Deighton said. “This site has been constructed to the highest safety and hygiene standards, with no public investment required. It demonstrates a real vote of confidence in the UK economy by GDF SUEZ (now ENGIE), another example of companies confirming that the UK has created the right environment for investment.”

Jean Claude Depail, Executive Vice President of ENGIE in charge of the Infrastructures, added: “Stublach is the first investment in theUK for our gas storage business, following many years of operation in France and Germany. I am delighted that the project has just achieved a major milestone and the first salt caverns are now full of gas and already contributing to the security of supply of natural gas across the UK.”

Over the coming months Storengy UK will continue to develop the Stublach site towards full its targeted capacity of 20 caverns. While commenting on the professionalism of the team behind the facility and the importance of the site Charlotte said: “I am immensely proud of the team that has constructed this remarkable facility, safely and with maximum attention given to the local environment and communities. Salt caverns are a safe and natural way to store gas and we have also been able to continue the tradition of extracting salt from this area to create the caverns. This has been used in the local chemical industry helping to support industry in Cheshire.”