A breath of fresh air

Although it is a relatively new mode of electricity generation within the country, Finland’s wind power industry has developed solidly in recent times, boosted by government subsidies and supported by the vast majority of the Finnish public. As of the end of 2016, Finland had a total of 552 installed wind turbine generators, with a combined capacity of 1533MW, generating 3.6 per cent of the country’s electricity consumption. There is, however, immense potential to increase this capacity, with a power capacity target for 2020 set at 2500MW, a figure that is likely to be met

One of the pioneers in the push towards this target is Suomen Hyötytuuli. Established in 1998, and the first company in Finland to introduce a megawatt-scale windfarm in 1999, Suomen Hyötytuuli has spent the last two decades significantly promoting Finnish wind power production with the help of its five operating windfarms, two located in Pori and three in Raahe.

“When we last spoke a year ago, two of our windfarm projects, the Tahkoluoto offshore windfarm and the Nikkarinkaarto onshore windfarm, were underway and these have both since gone on to begin producing energy under their own Feed-in-Tariffs. We are also now finishing our third new wind farm, Annankangas wind farm,” explains Suomen Hyötytuuli’s Managing Director, Toni Sulameri. “This advancement has resulted in the doubling of our energy production in the last 12 months. While this is only one small step in the future direction of the company, it does mark a significant milestone for us.”

The development of the Tahkoluoto offshore windfarm has been keenly watched by figures within the industry due to the fact that it is the world’s first offshore windfarm designed to operate in such demanding, icy conditions as those experienced in Pori. Made up of ten wind turbines, each with a capacity of 4.2MW, the windfarm’s estimated average power production totally is 43 per cent of its maximum capacity and an estimated annual power production of 155GWh.

Conditions for offshore wind power in Finland differ greatly from those in the North Sea. This is due to several factors, including a sea that freezes, a shallow coastline and a hard sea floor. The cold, extreme environmental conditions faced by the turbines has called for special technical solutions to be implemented, not least of all the steel gravity-based foundations standing at the bottom of the sea.

“Our work in perfecting offshore foundations began with a pilot project in 2010, when we installed a single prototype turbine with gravity based foundation to test the properties needed to operate in icy conditions,” Toni continues. “We began by studying the behaviour of the drifting ice that regularly affects the Baltic sea and the impact this has on offshore structures. What followed was the development of a suitable foundation structure, for which we sought inspiration from a number of sources, including those used to support light houses and other offshore structures that have stood for many years, and Finnish world known knowledge of ice breaking.

“Since the installation of the pilot turbine we have undertaken years of research and development in order to optimise the construction process, maintaining the weight of the foundation while at 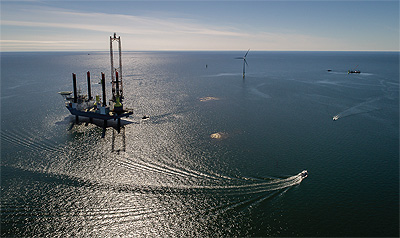 the same time doubling the size of the turbine itself and maintaining an average structural lifespan of between 25 and 30 years. With ten turbines now in place, the next stage of development will revolve around creating an industrial sized windfarm, potentially from six to ten times its current size, while also planning how we can grow the business further through the building of larger turbines and by moving into deeper water environments.”

Moving at a similar pace is the company’s Annankangas onshore windfarm. Located in the south of Raahe, construction work on the farm began in Autumn 2016, with erection of its ten Vestas Wind Systems 3.45MW turbines commencing in May 2017, ahead of first production in summer 2017.

Suomen Hyötytuuli’s other three energy producing windfarms are the Reposaari windfarm in the Meri-Pori area in Pori and the Kuljunniemi and Nikkarinkaarto windfarms in Raahe. The first is home to Finland’s first industrial-scale wind turbines, which today make up a group of ten that collectively produce approximately 55GWh of electricity per year. Made up of nine 2.3MW wind turbines, the Kuljunniemi windfarm is located on the sea shore in the Rautaruukki factory area and produces around 50GWh of electricity per year. The Nikkarinkaarto windfarm, producing energy since 2016, consist of ten 3.45MW turbines. The success of its various windfarms has helped spur Suomen Hyötytuuli on, with the company also responsible for a number of development projects located across Finland.

With energy market price predictions showing no concrete signs of progress in the short-to-medium term, Toni anticipates 2018 being a year of consolidation, with construction activity expected to restart in 2019. “Having successfully doubled our production levels in the last year, our focus now is to build up and make further improvements to the way we operate as a business,” he states. “In the meantime, we are aware of plans to bring in new legislation that will make way for the next wave of Feed-In- Tariffs for wind power and other renewable energies, which will make the economic climate much more favourable for construction projects in 2019.

“It is these tariffs that we believe will help drive forward the building of new development projects, onshore, over the next three-to-four years. Our own strategy is to at least double our production further still over the course of the next three years, which will require us to grow quite rapidly in an increasingly competitive market. By successfully achieving this we will place ourselves closer to another of our big strategic aims, which is to building wind power generating solutions beyond 2020, but without any subsidies necessary.”