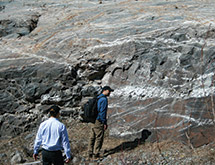 Once it comes out of the ground, all gold is valued equally. However, not all gold properties are valued equally, and that’s because some have a higher potential than others. Tamaka Gold Corp. believes it has one of these high-potential properties in the form of the Goldlund property in northwestern Ontario. President and CEO Howard Katz says the company sees a lot of growth coming out of the Goldlund project, and that growth will mean good things for the company going forward.

The company was started several years ago by Chairman Frank Zoebelein, who had been a success in the furniture industry but also had a vision to bring a gold project in Canada into production. “He realized that vision by investing a considerable amount of his time and personal wealth into two projects,” Katz says.

The first property Tamaka Gold explored, the Rundle-Swayze project, consists of three connected properties in Ontario, but it wasn’t until the company brought in the Goldlund property that the wheels really started to turn for the company. After investing more than $15 million of the Zoebelein family’s and close associates’ money into the property, Tamaka Gold was able to produce a maiden 43 101 report of more than 1 million ounces gold on the Goldlund Project.

That was around the same time that Katz joined the company, leveraging his past experience with several other successful Canadian gold projects to raise another $20 million in capital to advance the Goldlund project to where it is today.

Prosperous Property
The Goldlund property is remarkable for a number of reasons, according to Katz. “First of all, it’s a very large project but it’s also characterized as having a very high grade for a potential open pit,” he says.

In late January, the company announced that it had updated its 43 101 resource. The updated global mineral gold resource estimate is now 1.2 million measured and indicated ounces at 1.97 g/t and 2.7 million inferred ounces at 2.12 g/t. The resource estimate was calculated using a base case cut-off grade of 0.5 grams of gold per tonne (“g/t “) and an assumed gold (“Au”) price of $1,200 (US). The Goldlund Project remains open along strike and at depth.

The Goldlund Project has been found to have a grade of approximately 2 grams per ton, which is roughly double the grade found in the majority of comparable projects. “The higher grade speaks to potentially better economics, so that’s exciting,” Katz says.

In addition to the higher grade found at the site, the Goldlund property also boasts some substantial advantages over similar properties when it comes to stability and infrastructure. The claim group that makes up the property is bisected by the Ontario Provincial Highway 72, and the towns of Dryden and Sioux Lookout are nearby. There also are commercial airports in proximity to the property as well as easy access to power, railroads and labor. “All the elements of a successful project are nearby,” Katz says. “When you sum it up, it really does check all the boxes.”

Perhaps just as important as the easy access to infrastructure is the security and stability that surround the Goldlund project, Katz says. Numerous investors have been tracking gold projects in Ontario because Canada is far from the politically volatile countries many high-grade gold projects can be found in around the world. “People are seeking projects that are in a stable jurisdiction, so we offer that,” Katz says.

Measured Approach
One of the biggest challenges Tamaka Gold encountered while working to bring Goldlund to production was executing its exploration program on a tight budget, Katz says. Even though the funds were tight at the time, Tamaka Gold was dedicated to remaining a privately held company, and wouldn’t seek more capital until it was sure it would reach the critical milestone of identifying a new 4 million-ounce resource.

Katz says this forced Tamaka Gold to adopt a more measured approach to its exploration of Goldlund, and as a result the company was able to accomplish a lot while still remaining private.

“I think ultimately the challenge yielded tremendous fruit because we took a more measured approach,” Katz explains. “We had to take a more thoughtful approach to the deposit.”

Sitting Pretty
Katz says Tamaka Gold has received a lot of interest about capitalizing several programs at Goldlund, and he expects something to happen within the next several months. He adds that the company’s goals for the near future include three objectives: expanding to 6 million ounces, optimizing on the geotechnical front to develop a definitive processing plan for concrete pit parameters, and performing general resource upgrades which will all set the stage for feasibility studies.

No matter what happens in the near future, however, Katz says the strengths of the Goldlund property put Tamaka Gold in good position to make decisions that could lead to even greater success. “As we’re sitting today, we’re actively evaluating our options,” he says.