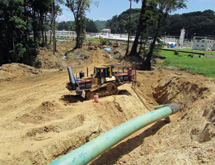 The year 2013 will prove to be a significant one in the development of the National Gas Co. (NGC) of Trinidad and Tobago. Large acquisitions and major projects launched over the course of the year are anticipated to help the state-owned company grow its reach and become more vertically integrated.

NGC this year acquired the exploration and production assets in Trinidad and Tobago of TOTAL, a global energy operator headquartered in France. The $473 million transaction included offshore holdings that have a production capacity of roughly 15,000 barrels of oil equivalent (BOE) per day and a gas volume of approximately 220 million standard cubic feet per day.

The company has already experienced 5 percent year-on-year growth since 1998, and today the country is among the top five ammonia, methanol and liquefied natural gas exporters in the world, NGC says.

Recent Projects
In addition to its recent acquisitions, NGC has kept busy with projects that will help it improve its operations. The company is in the design and engineering phase to install a booster compressor at one of its terminals, the overall cost is anticipated around $90 million.

When complete, the terminal will be able to transport gas from a NGC receiving facility into a cross-island pipeline, to supply gas to the new Union Industrial Estate.

The company also plans to invest US $70 million over the next five years to expand the use of compressed natural gas (CNG) as an alternative form of automotive fuel.

“We’ve been mandated by the government to facilitate the growth of CNG throughout the country,” Hamilton says, noting that the country currently has approximately 4,000 CNG-fueled vehicles and seven stations with CNG capabilities. The Trinidad government wants 30 percent of the vehicles in the country to use CNG by 2016.

NGC plans to construct 32 Compressed Natural Gas (CNG) vehicular refueling stations on the island, bringing the total number of CNG stations available for dispensing fuel to general public to 40 in all. The company has also embarked on a programme and has upgraded its corporate fleet of vehicles with the addition of 160 CNG powered vehicles.

Several major pipeline projects the company commenced in 2007 recently came to an end and are now in operation. An additional project is in its final stages of pre-commissioning.

The $400 million North-Eastern Offshore (NEO) pipeline, a line that travels from the BHP Biliton offshore gas export platform to an onshore terminal on Trinidad’s southeast coast;
A $164 million, 12-inch-diameter pipeline to Tobago that runs from the BHP Gas Export platform offshore field to Cove Estate in Tobago;
The $24 million Union Industrial Estate 24-inch spur pipeline and inlet facility, which transports natural gas from the cross-island pipeline to supply the new Union Industrial Estate; and
A $111 million liquid fuels pipeline that transports automotive gasoline, as well as diesel and aviation fuel from the island’s main refinery to a new gantry loading terminal on the northern part of the island on behalf of the Government of Trinidad and Tobago.

Sharing Knowledge
NGC’s non-construction related plans for the future include sharing its expertise. “Over the years, we have gained a significant amount of knowledge about the operation of pipeline systems and building a gas-based economy,” Hamilton says. “Ever since natural gas was first found here in the 1970s, we’ve been very successful working with the government to monetize it and allow for its transmission downstream to create an industrial economy.”

The company is working as a consultant with other emerging nations in South America and Africa providing technical assistance to facilitate development their gas based sectors. “We have the ability to provide the knowledge and expertise that we have gained over the last thirty years in natural gas and 100 years of oil operations to other countries,” he adds.