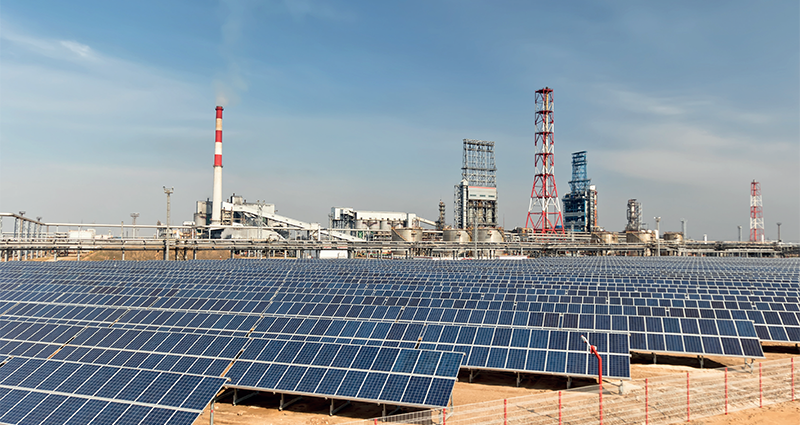 Like the odd married couple that doesn’t make sense to outsiders but who have the perfect complementary marriage, the relationship between Oil and Gas (O&G) and renewable energy is one that makes more sense than you may think at first glance. As discussed in the first two articles of this three-part series, stakeholders in each of these industries may have previously seen the union of renewable energy assets into the operations of O&G companies as counterintuitive. However, such a view is inherently myopic and ignores the potential opportunity to O&G operators and the renewable energy industry alike to reap the benefits of collaboration and partnership: allowing O&G to continue to offer the type of energy that cannot be replicated through electrification, while allowing renewable investment to improve the sustainability of the large O&G companies.

At ibV Energy, we’ve been working hard at this intersection for years, recognizing the unparalleled opportunity that could achieve multitudes of energy goals if the partnership between them was instead emphasized. And in doing so, we’ve heard all the skepticism and overcome all the typical hurdles in such a process. With boots on the ground, we’re able to say that the marriage of solar with O&G is happening today, and as such we can offer advice for the industry as a whole.

Just as newlyweds often get advice on building a successful marriage from those in their lives who have been married for decades, we’re here to offer pages from our playbook for how to make this type of collaboration successful.

Capabilities solar developers can bring to the O&G sector
As solar developers, we’ve identified a multitude of capabilities that are key to our O&G partners who are thinking of making the wise decision to embrace solar technologies into their operations. Short-sighted is the pursuit of simply building renewable assets or buying renewable generation; instead O&G companies can become clean energy leaders themselves by establishing true partnerships with their renewable collaborators.

Finding the unique value proposition: The optimal solar projects for an O&G company won’t come from basic off-the-shelf solutions, but rather they will be the ones that are fine tuned to that company’s existing assets (e.g., land it owns/maintains but isn’t utilizing), financial situation, energy needs, and ESG goals. A true partnership with a solar developer will bring on board a team that has seen such projects through from beginning to end and can identify the best customized solutions. For example, by identifying how to maximize the value and opportunity offered by an O&G company’s existing brownfield sites or monetizing the land already owned, solar developers can deliver profitable projects for their O&G partners.

Building relationships with necessary stakeholders: Any solar project that’s developed at the necessary scale to help O&G companies comes with myriad stakeholders; ranging from the local community and EPC companies, to regulators, and local authorities. Not only will an astute solar developer have the expertise and experience at navigating this crowd of stakeholders that need to be satisfied (the oil industry is used to dealing with pushback on their projects, but the solar developers may be more in tune with best practices to engage local concerned communities than you think), but they’ll be able to do so in a way that keys in on opportunities that less experienced O&G companies may miss, such as identifying all available incentives and tax breaks available from federal to state to county to local level for solar projects.

Start to finish from ideation to deployment: A successful engagement requires a common voice to guide the project from start to finish to ensure the vision doesn’t get distorted, promises don’t go unfulfilled, and a point person is on hand for all unexpected interruptions and challenges. The right solar developer will be a true partner on the project all along the process, as they are used to not seeing partners as simply end customers but rather long-term and integrated collaborators.

Reducing upfront costs for development: Partnering with an established renewable energy developer allows O&G companies to ramp up their use case of deployment and integration of clean energy without having to navigate and pay for the fixed costs. For example, a veteran solar developer can readily integrate new solar installations or farms at scale, providing site analysis, permitting services, engineering analysis, solar estimation, and interconnection studies using the talent and knowledge that they already contain. Preparing an O&G company to take on these new requirements can strain existing capacity in-house and fall short of needs for a successful implementation, but collaborating directly with a renewable development instead allows that partner to act more effectively and efficiently as the ‘in-house’ arm to do so.

Worth noting, as well, is that O&G companies can be uniquely advantageous to solar assets, not just the reverse. For example, O&G operations can act as major load centers which allow for concentrated and dependable build out of solar assets with a reliable demand for that solar generation. The curse of any major renewable deployment is curtailment, but O&G assets can be reliable offtakers of that energy, making these collaborations true win-wins.

Lessons learned from putting MWs of solar on the ground for O&G companies
At ibV Energy Partners, we’ve put hundreds of megawatts into the ground over the years, all over the country and even in some of the most solar-skeptical regions in the United States, so we’ve seen it all when it comes to roadblocks. Based on this background, we can likewise offer several key lessons learned to those O&G companies thinking of embarking on a newfound solar journey:

Identify the profit potential of solar and O&G partnership: O&G operators may naturally feel that embracing renewables in any form simply serves to reduce the demand for their core product (whether on their project or building the momentum for renewables to come and drink their milkshake), and that can create challenges getting buy in from all necessary areas of the company. These anxieties are why experience becomes necessary at the earliest stage of the project. Solar developers can come in and run all the necessary numbers to highlight the value of the project, the long-term return to owners and investors, and the pathway towards O&G companies becoming greener while not fundamentally upsetting the core business.

Filling in the knowledge gap: Notably, the shift towards renewable energy like solar power requires new skill sets, new types of technologies, new bases of knowledge. This knowledge gap is a key area to address, and it’s not one that an O&G company is likely to successfully navigate without bringing in experienced partners. Too often, O&G companies apprehensive about this new landscape may start by buying renewable companies or existing assets outright rather than take the incremental process, learning along the way about how they can participate in the renewable energy economy in a beneficial and sustainable way. Overcoming these missteps is where solar developers are poised to bring expertise.

Navigating land use challenges: Restrictions on allowable land use and challenging permits are common themes for anyone operating in the world of renewable development. While O&G companies are likewise accustomed to handling such hurdles, these issues take on a unique spin within the solar energy space, so they would need to start from the beginning of the learning curve if operating independently. Instead, though, this challenge can be best addressed by bringing on an experienced partner. Solar developers are always on top of these issues, tracking the annually changing processes across every different jurisdiction, and as partners they won’t bat an eyelash at having to do so.

ibV’s Guiding Principles
ibV Energy Partners has notably found success in working collaboratively on solar projects with our O&G partners thanks to several core principles.
– Structure: We’re active in renewable energy development, we have an open structure, and most importantly we are collaborative with partners. We make sure not to offer simply off-the-shelf solutions that will lead to overbuild, missed opportunities, and other inefficiencies and losses. We come in and embrace the perspective of the O&G company rather than project our values or priorities; any project begins with finding the answers to many questions:

– Enterprise-wide integration: Too often, developers of solar and other major renewable projects come in and remain siloed, but we know how to break those siloes down in this type of collaboration, which is even more important the larger the O&G company itself is. We come in with fresh eyes and can uniquely view all aspects of the project and its expectations – from the ESG side, from the financial side, and otherwise – and deliver the best customized results for our partners. We look at their emissions, their pipelines, their assets, their complete supply chain from upstream to midstream to downstream, rather than remain overly keyed in on any single aspect of their operations.

– True partnership: Another key to the successful opportunities we’ve unlocked in collaboration with O&G companies is always treating them as true partners, rather than simply another customer. ibV has enjoyed success after success as a consequence of operating as a de facto internal team for these O&G companies. For O&G enterprises, moving towards solar is brand new territory, and doing so comes with a lot of uncertainties and a great learning curve. As such, the successful model we’ve found is to have us work as that development team, sharing internal knowledge and training up the O&G teams along the way to ensure they have sustainable and long-lasting success in this new endeavor. Solar developers can be the best possible partners when they’re brought in earlier along in the process, getting involved with the strategizing, the business structure, and the financing, all when there’s the most flexibility on the table so our expertise can be the most valuable.

Reaping the just solar desserts
By embracing institutional expertise of solar developers, O&G companies can make the leap into renewables that will be a pure win-win for all involved:

Win: Lower operational costs
Why pay high local utility rates without questioning it instead of supplementing with self-generated solar?

Win: Make best use of existing assets (i.e., land)
For pipeline land, for example, O&G companies typically have a liability to maintain and upkeep the land to a certain standard. That’s purely a line-item cost. But put solar panels intelligently on that land? Now it’s a source of bottom-line benefit, not a cost. And it’s cheap to do because you already own the land.

Win: Foster growth towards ESG goals
Investors and customers are going to continue to pressure these companies to embrace the sustainable revolution and repeatedly ask about progress on ESG goals. The embrace of solar energy as a clean and renewable energy option shows serious commitment to these goals.

Win: Assets that will bring value to investors
Not only will investors love the ESG commitment, but the simple math shows that owning solar assets is a profitable endeavor, often reaching a payback period in less than a decade.

O&G companies must learn that these won’t be one-size-fits-all solutions. And the projects can get complex and wonky: Should it be structured with renewable energy credits (RECs)? Should we look to sell the electricity into the market? Should the power be used internally? It’s a puzzle that can be hard to solve if you’re not used to doing so, but that’s why the marriage with solar developers is so important.

The convenient shortcut rhetoric is that as renewables are coming, O&G is dying. But that’s simply not true. There is more than enough space for both sides of the energy industry, and in this evolving landscape the best positioned companies will be embracing both with flexibility, agility, and forward-looking plans. But don’t try to do it alone, unlock the possibility via partnership.