Back to News > The right connection

Enabling the connection of multiple offshore wind farms to the German grid, Prysmian Group has been awarded a major grid connection project worth in region of €140 million by the Dutch- German grid operator TenneT.

The project involves the supply, installation and commissioning of a High Voltage Direct Current (HVDC) 320 kV XLPE-insulated submarine and land power cable connection, with a transmission capacity of 900 MW, as well as the associated fibre optic cable system, comprising a land route of 30 km and a subsea route of 100 km. The turnkey connections will link the offshore converter platform DolWin epsilon, located approximately 100 km offshore in the German North Sea, to the mainland Emden/Ost converter station, with the purpose of transmitting the generated renewable energy into the German grid.

The submarine and land cables will be manufactured at Prysmian Group’s centres of technological and manufacturing excellence respectively located in Pikkala (Finland) and Gron (France). Offshore installation activities will be performed by two of the Group’s state-of-theart cable laying vessels — Cable Enterprise, for deep water installation, and Ulisse, for shallow water activities. Completion of the project is scheduled for the middle of 2024.

New entrant
Squire Energy is thrilled to announce as of 2nd July 2019, it has officially been granted a gas transporter licence, making it one of nine Independent Gas Transporters (IGT) in the UK.

Stuart Thomas, Director at Squire Energy says: “At Squire Energy, we always strive to give a better experience for our customers and by becoming an IGT, we are delighted to offer a complete and comprehensive service that covers conception, design, connection, delivery and transportation of gas services.” He continues: “It’s a significant milestone for our business and a tremendous achievement for all of the team, as well as being key to our expansion plans in the future.”

For 16 years, Squire Energy has been one of the UK’s leading gas infrastructure providers, providing gas services for some of the country’s most iconic buildings, including The Shard, The Cheesegrater and the Tottenham Hotspur Stadium. As the UK’s newest IGT, Squire Energy will help to extend the national gas network to hard-to-reach homes and communities, as well as connecting new developments to the main gas network. Squire Energy’s IGT customers can expect the same high-quality, reliable and effective service that has been the root of Squire Energy’s success for over one and a half decades. 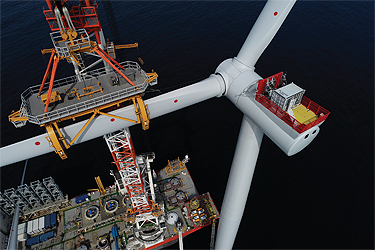 Ørsted is well on its way to building the world’s largest offshore wind farm as the 100th wind turbine has been installed at the Hornsea One site. Once fully online, the site will generate enough to power well over one million homes with clean, renewable electricity.

The company continues to work towards its aim of creating a world that runs entirely on green energy and with turbine installation expected to finish late summer, it expects Hornsea One to be fully commissioned in 2020.

Hornsea One, at 120km from shore, is the furthest from shore an offshore wind farm has ever been built. Not just marginally bigger – this project is a step change in size, nearly double the current world’s largest offshore wind farm, Walney Extension. It will span an area of 407 square km.

Featuring 174 Siemens Gamesa 7MW turbines, with the majority of blades manufactured in Hull, the electricity from Hornsea One is transmitted via the world’s first offshore Reactive Compensation Station, which is around half way between the site and the shore, to the National Grid. 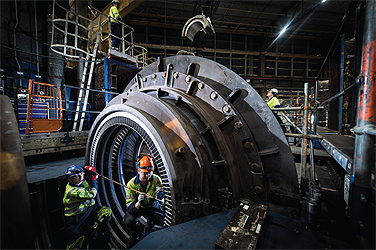 Drax Group is set to make substantial savings of up to £1m per year by significantly reducing the potential overrun of outages during required inspections of Drax Power Station, after a fiveyear deal to implement new digital evidence and workflow technology at the plant.

The power company has commissioned digital evidence and workflow platform eviFile to deliver the efficiency project at the UK’s largest power station, near Selby in North Yorkshire. This system allows for inspections to progress from request through to inspection completion and ultimate sign-off.

Drax Group’s outage co-ordinator and project sponsor, Michelle Desmond, said: “After an extensive procurement process, eviFile was deemed to be the best-fit solution due to its handling of complex processes and impressive level of configurability. We are confident this technology will make an immediate impact and bring a clear commercial benefit.

“We have already upgraded two thirds of the power station to run on sustainable biomass instead of coal. We’re looking to replace our remaining coal units with gas, which will extend the life of the plant, protect jobs and deliver cleaner, reliable energy for millions of homes and business. The efficiency savings through eviFile will allow us to focus as much attention as possible on our vision for a zero carbon, lower cost energy future.” 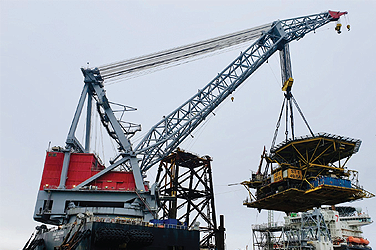 Now at the end of their working life, recovering these platforms is important to maximise the value of the materials and assets they contain, and further the sustainability of the offshore industry. With a recycling target of 97 per cent the project includes recovery of approximately 2500 tonnes of materials that will be carefully extracted and returned to industry, and where possible assets that have further operational life will be sold for re-use.

Martin O’Donnell, Decommissioning Director of Veolia said: “This work follows the successful recovery operations carried out at the facility, and really demonstrates how collaboration across the supply chain can deliver greater sustainability. We have already recycled over 80,000 tonnes of materials and created new job opportunities to meet the growing demand for decommissioning.”

James Johnson, Decommissioning Manager at Peterson added: “This project is a great showcase of how our collaboration with Veolia is enabling us to provide a full decommissioning service which provides a better customer experience.”

Production and discoveries
Eni has announced that production from the South West Meleiha Development Lease, located in the Egyptian Western Desert, some 130 Km North of the oasis of Siwa, has started. The current production, delivered through two oil producer wells, is around 5000 barrels of oil per day (BOPD) and is expected to reach 7000 BOPD in September 2019. The oil is transported and treated at the Meleiha Plant facilities operated by AGIBA, a company equally held by IEOC and the Egyptian General Petroleum Corporation (EGPC). AGIBA also recently made two additional near field oil discoveries in the Meleiha development lease in Western Desert, specifically on the Basma and Shemy prospects.

Bio combination
Bringing together established industry players with complementary assets and experience in one of world’s largest fast-growing biofuels markets, BP has announced a major expansion in renewable energy, combining biofuels and biopower with Bunge in Brazil. In a 50:50 joint venture, BP will combine its Brazilian biofuels and biopower businesses with that of Bunge to create a worldscale, highly-efficient producer of sugarcane ethanol in Brazil, BP Bunge Bioenergia.

With exciting new discoveries being explored and ambitious plans for future development, Encore Energy has positioned...

With a mission of increasing the reliability of critical remote infrastructure while reducing its carbon impact,...

Nexans has won a significant turnkey contract with Ocean Winds to design, manufacture, install and protect...