MIT alumnus Long Phan (Mechanical Engineering BS, MS, Ph.D.) and a team of engineers and expert advisors helped build the Draper Small Autonomous Aerial Vehicle, the world’s first fully autonomous helicopter, in the mid-1990s. In 2014, not long after battery drones became widely available, Phan was approached by the MIT Lincoln Laboratory with a mission to solve the payload and extended flight time problems for battery-based drones.

Innovation on Purpose
According to research firm PriceWaterhouseCoopers, the U.S. market for drone-based business services is worth more than $127 billion. However, today’s battery-operated drones can fly for only 30 minutes before their batteries need to be recharged, or the drones are swapped out themselves.

Additionally, there are gasoline-based drones and traditional fixed-wing aircraft and helicopters that can carry more extensive payloads. However in certain applications – such as power line and pipeline inspections, or perimeter security monitoring – the more costly maintenance and operations make drones a more cost effective solution.

Top Flight’s newest innovation, the industrial-strength Airborg H8 10K, is a larger drone (2 meters in diameter tip to tip) that can perform bigger jobs, and address challenges of battery drones and maintenance associated with all gasoline drones and traditional piloted aircraft. Soft-launched in May, it is a 10,000-watt hybrid gas-to-electric drone, which allows for more than three-hour flight times. Additionally, it is light enough to fly more than 100 miles, while strong enough to carry up to 21 pounds of payload. 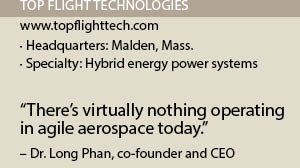 “It uses readily available gasoline to generate the power that drives the lift motors, keeps backup batteries charged, and powers all onboard electronics,” Phan explains. “Hybrid engines do not require between-flight recharging of batteries. You need only refill the fuel, just like a car, and immediately fly again.”

With its hybrid electric design, the Airborg’s parts are minimal, maintenance is straightforward and flight control can be semi- or fully autonomous, with missions developed first and tested in a Top Flight developed simulator.

“For example, if you were doing an inspection around an oil refinery you could fly it in the test simulator,” Polo says. “All you have to do is program it ahead of time, and the Airborg will repeat the mission hundreds of times.”

Top Flight’s engineering team is comprised largely of MIT PhDs and engineers who have patented the miniaturization of the hybrid power system for drones. “This overcomes the formidable challenges of extensive heat and vibration inherent in high energy-density power systems,” Phan says.

The Airborg contains full flight control and telemetry, which can be pre-programmed for missions and auto-safety. It also has the flexibility to have other commonly requested features added to address real-world commercial UAV industry-specific applications, including enhanced computing, sensing and communications payloads.

Agile Aerospace
Top Flight operates in what it calls “agile aerospace 2.0,” the space between ground level and 400 feet above the ground in elevation. According to Phan, flying closer to the ground means greatly enhanced imaging and sensing resolutions, as well as other capabilities such as communications thanks to the Inverse Square Law.

“There’s virtually nothing operating in agile aerospace today,” he says. “Today, people report that it’s a billion-dollar market for battery drones; however we think it’s a trillion-dollar market because nothing is flying in that space yet and no one knows about it.”

The region has enormous potential for UAV applications in what Top Flight calls “dull, dirty and dangerous” tasks, Polo adds, such as point-to-point and ship-to-shore cargo transport, aerial inspections, search-and-rescue and creation of emergency aerial communications networks. “They include redundant systems design, integrated safety equipment, and allow onboard computing and data links in flight,” he adds.

Exceeding Expectations
DataWing Global is Top Flight’s service partner in aerial data acquisition and analysis. According to CEO Steven Fargo, Top Flight’s Airborg not only provides DataWing with better flexibility to handle more challenging missions, but it also allows the company to provide added-value to its clients.

“With Top Flight’s aircraft we now have more options for sensor payloads, which will increase the industrial inspection offerings,” Fargo explains. “Additionally, the Airborg will greatly improve our operational efficiency because we do not have to rely on batteries; we simply refill the gas tank and continue working for hours at a time.”

Fargo notes that he believes clients in the oil and gas, utilities and construction industries will “benefit greatly” from the Airborg. “Large but dense areas of energy-based assets are perfect-use cases today,” he says. “There are quite a few visual-based inspections required by regulation and any time you collect large amounts of data and present that in a manner that is useful to the client, then you exponentially save the client time and money.”

This data is also useful when shared across business units to achieve a larger value-add effect, he notes, citing aboveground storage tanks as an example. “There are a number of American Piping Inspections (API) required on varying intervals,” Fargo says. “With the Airborg 10K, an entire tank farm can be imaged in just a few hours. The three dimensional and visual-based data is used to accomplish many of the inspection requirements, thereby reducing the need to visit the site on multiple occasions.”

Those requirements could include volumetric information, mapping data, measurement ability and HD-quality imagery, Fargo notes. “It is this technology that will enable the API inspector to do more with their time and save money,” he says.

Additionally, large-scale construction projects can benefit from the Airborg’s extended endurance, he adds. “When DataWing collects data for construction sites that are greater than 200 acres, we have to land the aircraft quite a bit and segment the work due to the battery limitations on flight time,” Fargo explains. “With three-plus hours of flight time, these projects turn around very quickly.”

Due to their short range battery-powered drones have to be operated “within line-of-sight. As the UAV services marketplace grows, Fargo believes the Airborg will be a “big player” when it comes to flying beyond-line-of-sight (BLOS), Fargo says.

“Although the Federal Aviation Administration does not currently allow BLOS flying without a waiver, it will not be long before we see Airborg’s flying above the millions of miles of pipeline and utility right-of-ways (ROWs) all across the country.

DataWing works with many UAV products and manufacturers, but Fargo considers Phan’s team the best. “Top Flight Technologies is a very smart and customer-centric group that fosters trust with everyone they work with,” he says. “We are extremely happy to be a partner.”

Polo notes that he considers many of the current members and advisors of Top Flight to be “early pioneers” in drone technology. “We were working on developing drone technologies when virtually no one was looking at it,” he says. “We saw the challenges early on and developed many of the solutions surrounding how to make aviation systems autonomous.

“Today, we’re using a lot of our knowledge, experience and expertise to apply that to next-generation drone technology, creating new business tools for data sensing and transport unlike anything available today,” he adds.

Looking Ahead
Top Flight is “most excited” about the Airborg 10K, Phan notes, adding that there is no other device like it on the market. “Through a customer engagement process, the Airborg is fast-adapted for a particular set of industry applications, and is manufactured in multiples by our professional manufacturer for commercial or DOD use,” he explains. “The Airborg is now available for customer engagements.”

The price of the Airborg is contingent upon the components, redundancy level and application-specific onboard equipment to collect information or transport cargo, as defined in the engagement process, according to Polo.

“For example, the price can increase with the type of cameras, sensors and configurations, such as a parachute, that are added,” Polo explains. “We say they’re 85 percent complete and the last 15 percent are the specific things customers add for their industry and business application.”

The Airborg will enable missions to be flown more frequently and at a fraction of the cost of commercial manned helicopters and fixed-wing aircraft. “It took over two years of intense effort and hundreds of hours to take something that weighs about 200 pounds and miniaturize it down to 20 pounds,” Polo concludes. “The Airbog generates the same power as a small helicopter or airplane.”