Following a three-year construction period, the Total refinery at Leuna first went into operation in 1997.

The facility is the newest and one of the most modern refineries in Europe producing a comprehensive product range including gasoline, diesel, fuel oil, LPG, naphtha, aviation fuel, bitumen and methanol. Furthermore, the refinery is Germany’s largest producer of methanol, which is an important raw material within the chemical industry.

The refinery is a 235 kilo barrel (kBOE) per day plant, capable of producing around three million tons of gasoline meaning that it largely covers the needs of Saxony-Anhalt, Saxony and Thuringia, including approximately 1300 service stations located within the catchment area of the refinery that obtain their supplies from Leuna. Each day the refinery processes an average of around 30,000 tons of crude oil, which is imported primarily from Russia into the plant’s storage tanks via pipeline. The finished products produced at Total Refinery Leuna are delivered to market through its comprehensive road, rail and pipeline links.

“The special focus of Leuna is to produce methanol from the residue at the bottom of the refinery,” says general manager, Reinhard Kroll, commenting on the development of the plant. “There are only a few refineries in the world that are doing this and it is an important point in the development of Leuna, because when Elf (which became Total) decided to build the refinery, the methanol plant already existed and was quite new at the time. The decision was made to incorporate this because we are an inland refinery, and as such we do not have easy access to the bunker market. At that time no one was talking about changes in bunker regulation and it was difficult for the refinery to access that market, but you can gasify the heavy residue for transport. This is what the POX (partial oxidisation)/methanol plant is doing, it is gasifying the heavy residue and producing a syn (synthesis) gas of hydrogen and carbon oxides, and then transferring it to methanol through synthesis.” 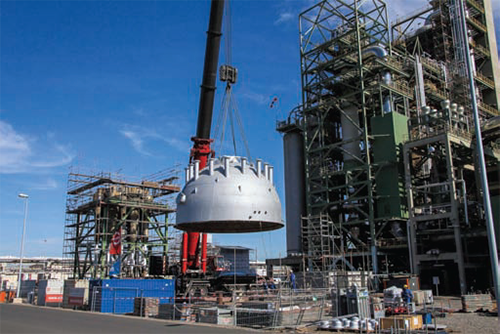 As such the Leuna refinery has become an important petrochemical hub for the region that incorporates the most modern processing technologies and the efficient use of raw materials, energy and water to ensure that the refinery is operated in an environmentally friendly way. The refinery relies on energyefficient processing and employs a resourceefficient use of water from the Saale River, which is carried by multiple water saving technologies and efficient water treatment plants. As a newly constructed plant, the Leuna refinery is equipped with noise protection technology and the surrounding soil and ground water are protected from contamination by double-walled and double bottom tanks with leak detection systems.

During June 2014 the refinery was shutdown for the third time in its history to undergo a large turnaround and inspection project. Such fundamental refinery check-ups must be performed by law and preparation for the shutdown started in May 2011 because as part of the mammoth project columns, vessels, heat exchangers, compressors, safety valves, etc must be disassembled, cleaned, inspected, repaired and finally reassembled again. “We have a strategy for a full turnaround every six years,” Reinhard elaborates. “Legally it should be five years, however through a system of inspection it is possible to extend this to six years. The refinery is a highly integrated one, so the units are not simply separate units acting on different products, but they are also highly integrated for energy efficiency and so on. For example, one unit will feed another with hot feed, so it does not make sense to have a partial shutdown of the refinery, and as such we have a strategy to have a full shutdown every six years.”

The shutdown itself lasted some 45 days and involved as many as 60 small, medium and large investment projects valued at around 65 million euros. All of these projects were carried out simultaneously by over 3000 employees from multiple contractors, turning the refinery premises into a major construction site with 85 cranes in operation, including a 1250-ton crane at the site’s cracker at the peak of the turnaround. “It was a huge shutdown,” confirms Reinhard. “Normally you can expect around 800,000 work hours for a big shutdown, however we did 1.2 million work hours. To ensure that this was not a risky operation preparations for the shutdown commenced three years before it took place, so there was a long period of preparation for such a big event, which represents more than just the shutdown as it also encompasses bringing together the right contractors and organising the correct logistical support including cranes and insulation etc.”

Although the shutdown of the Leuna refinery was a vast operation, steps were taken to ensure that the standstill of operations did not aversely affect fuel customers within central Germany. Prior to the beginning of operations the tanks located on the refinery premises were filled to the brim with automotive and heating fuels to ensure fuel supplies remained consistent throughout the shutdown. This allowed the refinery’s operators and supporting contractors to focus on completing the task at hand without distraction.

The purpose of the shutdown was to inspect, maintain and upgrade the refinery as well as adjust its focus to better meet the requirements of the current petrochemical and fuel markets, as Reinhard explains: “What we did was invest in the replacement of equipment, which is a normal part of such shutdowns, and we invested in improving our energy consumption as well as in slightly shifting the plant’s product focus. The European market is developing in a decreasing direction in general, but mostly in gasoline. Within Europe, where there is a large surplus of gasoline, there is also a slightly decreasing market for diesel. There is however some market for intermediate chemical products, so we have adapted our cracker to produce less gasoline and more chemicals such as propylene. That was really our intent to develop our product portfolio to meet market needs.”

This focus on more efficient, cleaner and increasingly market focused operation will enable the plant to weather the challenges of a decreasing market within Europe and an increasing focus in its native Germany, as Reinhard concludes: “Looking at the German market, the German government is dedicated to shifting the country’s reliance on oil and coal to other energies, so that it can significantly decrease emissions and the number of refineries that are necessary on the market. So there is a level of competition that is associated with operating in Germany, and what we are doing as the newest refinery in the area is working to keep that level of competition in our favour. We want to remain in the group of refineries that are able to survive in the German market.”