Excitement is stirring across Europe as we fast approach 2020 – the year when the first gas deliveries to the continent via the Trans Adriatic Pipeline (TAP) will start. Recognised as a Project of Common Interest (PCI) by the European Commission and EU member states, the highly strategic energy project will see a 878km-long pipeline that will transport natural gas from the gigantic Shah Deniz II field in the Azerbaijani sector of the Caspian Sea to Europe. The TAP will connect with the Trans Anatolian Pipeline (TANAP) at the Turkish-Greek border in Kipoi and cross Greece, Albania, and the Adriatic Sea, before coming ashore in Southern Italy, offering a direct and cost-effective transportation route and opening up the vital Southern Gas Corridor, a 3500km-long gas value chain stretching from the Caspian Sea to Europe. 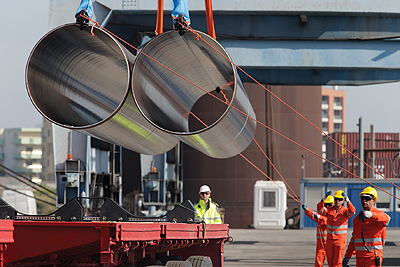 markets. At a macro level, TAP will help Europe transition to a low carbon economy, diversify sources of supply, strengthen the continent’s gas competition and enhance its gas connectivity,” comments Luca Schieppati, Managing Director of TAP AG, the company responsible for the development of the pipeline.

Indeed, in recent years, Europe’s energy mix has been evolving, with a steady decrease in the role of coal. It has been estimated that converting from coal-fired power plants to gas-fired installations today would enable Europe to exceed its greenhouse gas emissions reduction target of 40 per cent by an additional five per cent by 2030. As the cleanest of fossil fuels, natural gas is the best energy commodity to partner with renewable energy, the latter’s development being vital for Europe’s transition towards a low-carbon economy.

Furthermore, TAP-transported natural gas will contribute to the decarbonisation of the economies of South East Europe and the Western Balkans, in particular, where the energy sector is overly reliant on heavy fossil fuels, coal and lignite. According to the European Commission’s Energy Union strategy, each member state should have access to at least three different sources of energy supply. As TAP will enable connection to key infrastructure, such as the Ionian Adriatic Pipeline (IAP) and the Interconnector Greece Bulgaria (IGB), these could bring a new source of gas to regional markets currently dependent on a single source and some which do not have access to gas at all.

By bringing new gas volumes, the pipeline will also increase gas to gas competition, offering a more competitive environment for the industry and for end consumers in transport and home heating. In addition, it will enhance the interconnectivity of Europe’s gas infrastructure without burdening public finances.

“In one of our most recent highlights, we successfully completed financial close in December 2018, securing 3.9bn euros – the largest project finance agreed for a European infrastructure project in 2018,” he continues. “TAP has voluntarily committed to complying with environmental and social standards required by the international financial institutions. As such, all necessary assessments to substantiate this commitment have been undertaken and met by us.”

Unsurprisingly, TAP has striven to make use of the best available technology throughout the project execution. In Luca’s words, nowhere has this been more evident than in the instances when the impact on the environment had to be as negligible as possible. “To give you an example, in Greece, we completed a 1820m long horizontal directional drilling for the Axios river crossing, thus achieving a world-class engineering feat when it comes to such a large volume of directed bore pipe in one length.

“We also realised the refurbishment of a 92m bridge in Albania, at the entrance to the town of Fier. As it was impossible to close the bridge for a complete replacement of the deck, we used a structural strengthening method that allowed road traffic to remain open. It is in Albania again where we are facing one of our greatest technical challenges,” Luca reveals. “We had to lay the pipeline at altitudes of 2100m in the Albanian mountains and so we are currently constructing a 34m deep and 400m long micro-tunnel to ensure the stability of the pipeline. 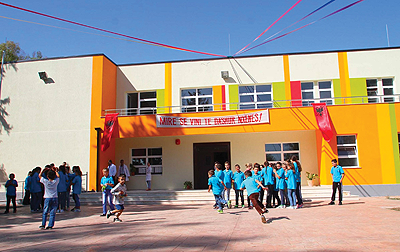 “Then, in Italy, we built a 1.5km microtunnel for crossing the coastal strip. This enabled construction work to bypass the beach altogether and protect offshore and onshore areas, not affecting bathing, fishing and tourism activities. The underground tunnel was built by drilling a pit on land about 600m away from the beach and reached the sea at about 900m from the coast at a depth of approximately 25m. From there, it will be linked to the offshore section of the pipeline, which will be located on the seabed,” Luca explains.

tourism activities. The underground tunnel was built by drilling a pit on land about 600m away from the beach and reached the sea at about 900m from the coast at a depth of approximately 25m. From there, it will be linked to the offshore section of the pipeline, which will be located on the seabed,” Luca explains.

Naturally, recruiting the right staff has been essential for TAP and Luca is clear that the company’s employees are fundamental to the success of the project and the operation of the pipeline. “We aim to identify, equip and engage the most qualified candidates and offer them a career opportunity at TAP,” he says. “We are currently seeking experienced and dedicated professionals who are committed to excellence and the highest HSE standards, and who are able to work together in a multinational environment. Since we believe that developing our workforce is crucial to the success of the project’s operation phase, we have also developed and implemented a range of training programmes touching upon the improvement of technical skills and the growth of management capabilities.”

Throughout the timeline of the project, TAP has also gone to great lengths to support a variety of community projects. The company has invested over 37m euros so far in more than 230 projects across Greece, Albania, and Italy. “Among the key projects that we have implemented are the donation of over 50 utility vehicles to local authorities in Greece, as well as the construction and renovation of 20 playgrounds, and the establishment of the first human milk bank in the northern part of the country,” Luca reveals.

“In Albania, we renovated eight schools and two kindergartens, and have also rehabilitated 58km of roads and bridges, which benefits over 200,000 people. As for Italy, we launched a master course in hospitality management and offered several small grants to NGOs operating in the areas of sports, culture, tourism, and social issues. We can see that these projects are improving the quality of life of thousands of people and we will continue implementing such initiatives in the upcoming months, hoping that our example will encourage other international investors to invest in these countries.”

The second half of 2019 promises to be quite eventful for TAP, as the pipeline is getting ready to deliver its first gas volumes next year. On the technical side, the focus will fall on the safe completion of the onshore pipeline construction works before the pipeline and its facilities enter the precommissioning and commissioning phases. In parallel, the company is preparing for commercial operations as a transmission system operator (TSO) and an independent transmission operator (ITO), while also securing a series of commercial licences to operate from the relevant authorities in the three host countries.

“Our operations team is very busy at the moment, implementing the Operations Readiness Programme and building both the transportation services and the asset management processes, in order to be ready to operate efficiently and effectively,” Luca adds. “Additionally, the procurement process is well underway. A key objective for this year is to ensure the capability and readiness of all operations and maintenance providers, spares, tooling, and equipment ahead of the safe introduction of hydrocarbons into the TAP pipeline and adjacent facilities.”

In conclusion, Luca extends his gratitude to all the political stakeholders who have thrown their weight behind the project and supported it throughout its implementation. “None of the progress we have achieved to date could have been made without the strong support of our host governments, shareholders and key international players, among which are relevant financial and regulatory authorities, EU institutions and the US Government. We are very grateful for their unwavering support and look forward to continuing our work together.”