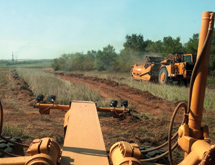 United Grading and Paving has been based in Powers Lake, N.D., for two years performing earthmoving, excavation, asphalt and grading for residential and commercial customers. Those markets are improving, but Vice President Paul Schneider says the company is looking to enter the oil and gas industry to broaden the future of the expanding company.

“We would love to break into the oil and gas industry,” Schneider says. “It’s different than commercial and residential work because of the many qualifications required to get into the industry.” Performing work for the oil and gas industry may take a couple more years to attain, but United Grading and Paving is confident that steady work will follow once the consistency and high-quality standards of its work is demonstrated.

“Since this industry is performance-based, once a relationship is developed with many of these companies, we are certain to be utilized quite a bit,” Schneider says. “We won’t have to go outside that industry any longer. The company just needs to perform well to make the work happen.” The goal of United Grading and Paving has always been to break into the industry, but it was delayed in its pursuit when North Dakota’s volume of commercial and residential work increased rapidly.

United Grading is owned by Tom Lindstrom, Eric Werth and Schneider who believe their more than 75 years of collective experience in the industry sets them apart to provide the know-how oil and gas companies need. “I read an article that said that in some areas of North Dakota they were issuing about 600 drilling permits every month,” Schneider adds. “Each one of those wells needs what we do – grading, excavation and excavating.”

Bright Lights to Rural Plains
United Grading and Paving’s team spent the early 2000s in Las Vegas capitalizing on the town’s boom in residential and commercial construction. When the market began to decline in 2010, the company looked to relocate for more work and ended up in North Dakota. “Things died down for quite a while in Las Vegas and we saw an opportunity in North Dakota so we gave it a shot, took a gamble and it’s paid off,” Schneider says.

Most of the work United Grading and Paving is securing today comes from building “man camps,” or makeshift villages that provide temporary housing to workers in rural locations in North Dakota. “Man camps have come to provide quite a bit of business in the area,” Schneider adds. The company performs the earthmoving and excavating for the camps and subcontracts paving work. “We are looking to add paving in the future, but we need to observe the market to see if things will continue the way they have been going before adding the service,” Schneider explains.

United Grading has also noticed an increase in commercial building in North Dakota, Schneider says. “North Dakota is the main source of our work and continues to be the primary focus of our concentration,” he adds. “The high-pressure, fast-paced environment in the Las Vegas growth explosion has well prepared us for the demands of this full-scale, statewide boom in the oil and gas industry.”

Appropriate Crew Size
United Grading and Paving performs its work with a crew of eight to 12 workers and prides itself on its small group of knowledgeable employees. Most of its employees have worked in the construction industry their entire lives and the economic downturn has made it less difficult to find experienced workers. “There are a lot of guys out there looking for work,” Schneider adds. “There is quite an opportunity out there for anyone wanting to get in the industry.”

Even though United Grading runs a small crew, it guarantees projects will be completed on-time or ahead of schedule. Its 24/7, flexible scheduling surpasses customer expectations. The company retains its customers by providing this kind of exceptional service. “We are available to the client in every aspect,” Schneider says. “We help them from conception, to consultation and finally construction. We help them do it right the first time.”

While working on various projects, the winter causes challenges and each year is different. “We have migrated from a place with extremely high temperatures to an environment of extreme lows. Although daunting, we are up for the challenge,” Schneider says.

Although North Dakota continues to provide opportunities, United Grading and Paving also is looking to expand its footprint to Montana. As it breaks into the oil and gas industry, Schneider is confident more opportunities will arise. “We are looking forward to growing with North Dakota,” he adds.