Vattenfall has shifted its focus towards renewable energy in recent years – there has been a strategic decision that this is where the future of the business lies. The company is therefore moving away from its use of coal and gas, and instead is shifting increasingly towards wind power. Vattenfall is committed to providing energy that is CO2 neutral, whether that is through wind or other means, and due to the divestment of its lignite operations in Germany – Vattenfall will have an increasingly carbon neutral production. The business is taking measures to create an energy company that could become the renewable energy producer for Europe, providing cheaper wind power that will one day no longer requires subsidies.

The company began as, and continues to be, a Swedish state owned organisation, this has a number of benefits to it, some of which Country Manager for Vattenfall in Denmark and Vice President of Engineering & Construction within Vattenfall Wind Ole Bigum Nielsen discussed: “We are 100 per cent owned by the Swedish state, and we have a very long history. The state has a lot of experience and understanding of the energy business, and I would say it is clearly an advantage for Vattenfall to have a very solid and stable owner. Also, in financial terms, by being owned by Sweden it means that we have a very good rating.”

The company is active within many sectors of energy, and is currently undergoing a change in direction in how it will produce its products, and Ole shed some light on these: “We provide electricity, 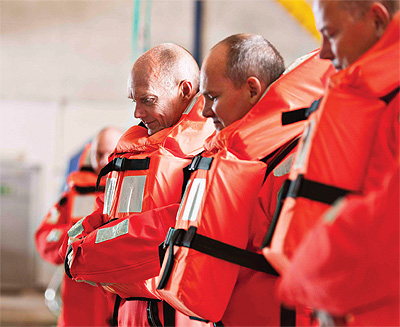 and heat, and gas, and many more energy services in general. Our business operates in many aspects of the process, from production, trading, distribution, and sales, and a great deal more. And up until the last few years Vattenfall has been a fairly traditional energy utility, using coal and gas, for example. However, in 2015 a new strategy was decided and is being implemented, and this has changed a great deal – the company has started its transformation, and as a part of this Vattenfall is divesting its lignite assets, and it will instead focus on renewable energy.”

There are many projects that Vattenfall has either completed or is working on in the renewable sector, and some examples of this include Sandbank, DanTysk, Horns Rev 1, Horns Rev 3, and a number of others. The offshore wind farm Sandbank is the second major wind power project in the German North Sea by Vattenfall. The offshore wind farm comprises 72 Siemens wind turbines in the 4-megawatt class. With an overall capacity of 288 megawatts, the wind farm provides renewable power to supply up to 400,000 households. The wind farm extends over an area of 60 square kilometres and is located 90 kilometres off the coast of Schleswig-Holstein, right next to DanTysk. The Sandbank wind farm can potentially be expanded to a total installed capacity of around 500 megawatts. The project area has room for a total of 64 additional wind turbine locations. The North Sea areas off the coast of Sylt provide Vattenfall with sufficient generation potential to supply renewable power to over one million households in Germany.

There is also Horns Rev 3, which will consist of 49 wind turbines with a total capacity of 400 MW, which can generate power equivalent to the annual consumption of 425,000 Danish households. The turbines at this wind farm will be the V164-8,0 MW model, these offer the latest in wind technology and will increase output. Vattenfall is also involved in developing a test facility in Scotland, which will be developing improvements to the wind industry, such as the use of suction caisson in wind farm installation – these will reduce noise, and lessen any environmental impact, plus it is much easier and simpler to remove.

At the very core of Vattenfall’s message is that it is not complacent about wind energy. It is moving forward quickly – in order to drive the price of this energy down, and to decrease wind power’s need for subsidies, all in order to provide environmentally friendly and cost efficient energy to Europe. The progress of which was something that Ole discussed: “The extremely positive thing is that the price curve for the cost of offshore produced electricity has broken, and now it is on a downward trajectory. Previously, for a number of years it only knew one way, and that was up, but that has changed and it is now only going down.”

In the coming years the company expects strong growth, as Ole explained: “We plan to have doubled our wind capacity by 2020, and by 2025 we aim to have tripled it.” The future for Vattenfall looks a bright one – it has managed to start the transition from a traditional energy company towards one that has renewable resources at the heart of it. A key part of Vattenfall’s ambition for the coming years is driving down the price of wind power – eventually making Vattenfall’s renewable energy the stand out option to fuel Europe.