Formed in 2001 through a spin-out of Battelle, the world’s largest largest non-profit research and development organisation, Velocys today operates at the forefront of the smaller scale gas-to-liquids (GTL) industry. During 2008 Velocys merged with Oxford Catalysts, a company originally formed in 2004 as a product of the University of Oxford’s prestigious Wolfson Catalysis Centre and headed by one of the world’s most respected inorganic chemists, Professor Malcolm Green. Today Velocys continues to employ microchannel process technology to convert natural gas and biomass into premium liquid products including, diesel and jet fuel as well as speciality products such as waxes and base oils. 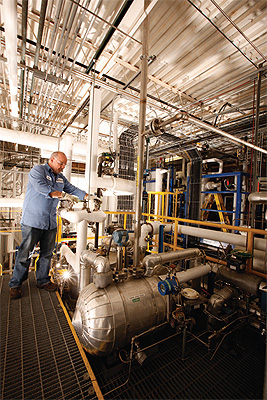 “The technology developed by Velocys is centred around process intensification; enabling chemical transformations in very small reaction tubes. The idea was originally focused on making chemicals in space, but it has several wider market applications. One such application is Fischer-Tropsch, which takes hydrogen and carbon monoxide (syngas) as input and synthesises long chain paraffinic hydrocarbons,” explains Business Development Director, Dr. Neville Hargreaves. “Oxford Catalysts and Velocys began talking during 2008 and quickly realised that there existed a perfect match in technology; collectively the two companies had solved two parts of the same R&D puzzle. Oxford Catalyst had developed the most active catalyst available and Velocys had a reactor that was able to manage that activity. The Fischer- Tropsch reaction generates a lot of heat, so using a super-active catalyst requires a reactor that can deal with the resulting heat by dissipating it very quickly. The two company’s technologies work extremely well together so that today the merged company has a technology that has lots of commercial applications.”

The technology approach taken by Velocys in fuel synthesis is significant in that it is highly effective at a relatively small scale. The handful of world-scale GTL plants currently in operation globally have capacities from around 500,000 tonnes per annum (tpa) to more than five million tpa. “The volumes of feedstock needed to sustain a GTL plant using conventional technology means that such technology cannot use smaller standard gas reserves, the gas associated with oil production, waste or landfill gas as feedstock. However, using Velocys technology, plants are possible with capacities of few thousand barrels a day, which is equivalent to around 100,000 tpa in fuel product,” Neville elaborates. “This is much more consistent with being able to develop a plant that does not require so much space and it does not limit the development of a GTL plant to locations adjacent to only the largest gas fields around the world. Thinking smaller also means that the capex required makes GTL more accessible to a wider range of possible developers. GTL plants are capital intensive projects and to be able to build them on a smaller scale and remain economically viable is a significant benefit.”

During February 2016 Velocys began work alongside one of its investors on an initial engineering study, which will focus on the possible development of a new waste-to-liquids project in the UK. The proposed project would take hundreds of thousands of tonnes of post recycled waste per year that would otherwise be destined for landfill or incineration. “Primarily Velocys is a technology licensing company and we behave like other chemical process technology licensors in that we give clients a technology license, however we are slightly different as we also provide equipment such as catalysts and reactors to clients,” Neville says. “While it is generally third parties that are developing plants incorporating our technology, Velocys has acquired project development capabilities of its own during the last couple of years to help accelerate the market’s development. This means that where we see an attractive opportunity we are prepared to invest our own time and effort to help with the early groundwork. I think it is unlikely that we will own a GTL project in the UK (natural gas prices here are too high), but if we can be an agent that causes a waste-to-liquids plant to be built here then we would see that as a very good outcome.” 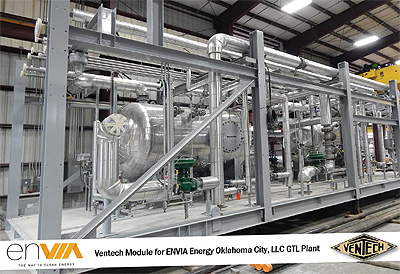 Velocys is also presently close to reaching mechanical completion of its flagship project, a GTL plant in Oklahoma City that is located adjacent to Waste Management’s East Oak landfill site, which will use a mixture of landfill gas and pipeline natural gas as feedstock. The project is being carried out by a joint venture called ENVIA Energy, whose members include Velocys, Waste Management and Ventech Engineers. “Financial close of that plant was achieved in mid 2014 and we expect it to reach mechanical completion during mid 2016. Build of the reactors and catalysts was completed in 2015 and Ventech has essentially completed the fabrication of the plant’s modular process units at its workshop in Pasadena, Texas,” Neville reveals. “We are very excited about this commercial reference plant; it is a very important project and we are very glad to be playing a strong part in it.”

Over the coming years Velocys will continue to develop its leading smaller scale GTL technology and pursue its commercialisation. Key to this will be the accumulated experimental results and supporting data that demonstrates to potential project developers and financiers the strength of the company’s technical offering. “Data is vitally important in this business. To ensure the best plant economics project developers must select the best technology with the highest possible conversion of feedstock to desirable products, and their decisions need to rest on really solid technical grounds,” Neville concludes. “Our technology has undergone more than 1.3 million hours of testing at the laboratory scale and over 26,000 hours at the pilot and demonstration scale. The pilot plant results we published at the end of 2015 use the exact same process as the commercial reference plant. This gives us a tremendous depth of data and an understanding of what is going on, which is very important to our business and the businesses of our customers.”