VWS MPP Systems operates under the oil and gas division of Veolia Water Technologies. Originally part of the Dutch chemicals company Akzo Nobel, it was responsible for the re-launch of a technological concept that had been shelved for nearly two decades.

However, a potentially uncontrollable slow release of liquids led to it being put aside until 1992 when it was decided to review previous ideas. “The idea of using these macro porous particles as a carrier for nontoxic and biodegradable extraction medium that can absorb and extract hydrocarbons from water was suggested,” explains Erik Middelhoek, managing director, continuing: “Having reviewed the process, we began working closely with Elf Aquitaine, in the belief that we could extract dissolved benzene and other hydrocarbons from a produced water stream coming from gas production, whilst overcoming previous flaws.” 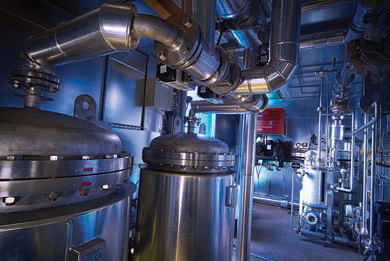 Having undertaken a range of pilot tests, a full-scale system was ordered and installed by 1994. “The client continues to achieve the results in treating the gas produced water. Now owned and operated by Vermilion Energy, the system is additionally used for treating water from all production wells onshore,” says Erik. It was at this milestone that the development of the material and technology really picked up, with Shell, NAM, and Total involved in the supply of the first offshore MPPE system. Installed on the Dutch shelf of the North Sea in 2003, the system, like its decade earlier counterpart, continues producing satisfactory performance of the low maintenance system with great efficiency.

In 2004 VWS MPP Systems began working with Norske Hydro (now Statoil), on a large oil and gas specification MPP unit, which was installed in 2008 and has continued to operate ever since. The resulting reputation that the business has built up ensures it continues to work with major players, including Total, Shell and Statoil. With several high-end oil and gas specification MPP installations to its name, it is currently involved in a project with INPEX Australia, on the multi-billion dollar Ichthys LNG project off the coast of Australia. “This is such an interesting but also challenging project, and at the moment a large portion of our resources are working on it,” highlights Erik, as he goes on to comment on the current market climate.

“It is noticeable that there are several projects which have been put on hold as a result of both changes in oil price, as well as legislation.” Various political issues have an impact on projects, as seen recently when Noble Energy signaled that it was suspending further development of the Leviathan and Tamar gas fields in the Mediterranean until Israel makes a final decision on resolving the natural gas monopoly and other regulatory matters. “Also noticeable however is that more companies are adopting stringent discharge rules for produced water, so projects actually highlight discharge limits resulting in the provision of an MPP solution,” he adds.

Produced water, especially gas and LNG produced water, contains high concentrations of toxic compounds such as benzene, toluene, ethyl benzene and xylene (BTEX), poly aromatic hydrocarbons (PAH), and dispersed and dissolved aliphatic compounds. All these compounds can be difficult to remove without MPP technology. “As a result, we are able to meet all differing discharge limits set by various legislations, around the world. Our technology ensures we can treat all types of gas-produced water, whereas other competitors may be restricted to certain situations. This has further bolstered our reputation, with clients recognising MPP to be a guaranteed and safe solution,” Erik points out.

Operating with a relatively small core of key personnel, contracting labour when required, the business is well structured to face the future market demands. “There is quite a bit of activity ongoing in the region between Australia and Indonesia, as well as much more planned for the near future. Operators such as INPEX, Total, Shell and Woodside are still very active, and whilst such organisations are being more careful with their investments, these projects will eventually come. The gas is there, and it has a value. China and Japan have a substantial demand for energy, and we expect prices will rise again in the future and projects will start up, but this may take one or two years,” explains Erik.

Alongside its commitment to ongoing projects, the business is lining itself up for additional UK based industrial projects, utilising its ability to diversify across sectors. Working under preliminary contracts addressing waste water problems for chemical producers and gasification plants, Erik says: “It is a very interesting way to keep our portfolio filled during this period when oil and gas projects are postponed.” Whilst the MPP technology continues to enjoy its finest days, the business progresses with investigation into broadening its markets and the technological portfolio. “There are number of developments like the treatment of gas streams utilising existing technology, but the removal of other components from water, including heavy metals such as mercury with extremely toxic and volatile properties is an area of interest. We expect to be able to present interesting solutions in the coming years,” he concludes.