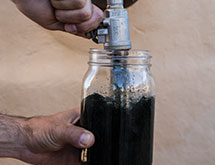 Many firms engage in green practices, but very few make the environment the center of their business. But Water Rescue Services does that through its unique services, President Wes Williams says.

Based in Fort Worth, Texas, the company offers on-site water recycling for flow-back and produced water for fracturing. Williams started Water Rescue Services in 2010 while he was living on a ranch in the Barnett Shale region.

Williams got the idea for the company when an exploration firm that worked on his ranch wanted to recycle and reuse its frac water. Although it signed a two-year agreement with a recycling company, “It ended up going for three,” he recalls.

This gave Williams the idea to build a mobile recycling system. But, at the time, he did not have any experience with fracking or water recycling. “Believe it or not, I came out of the apparel industry,” he recalls, explaining that he owned and operated an apparel company for 17 years before living on his ranch.

To make the transition, he studied water-recycling processes and consulted with Dr. Bryon Tarbet, Ph.D., a chemist who now serves as the company’s vice president of chemistry and technology. “He was instrumental in helping me with the patents we obtained,” Williams says.

A Great Business
Today, Water Rescue Services operates with a staff of 45 employees and recycles around 24 million barrels of water annually.

“We’ll go to the site, grab water and figure out the best process for that particular site,” Williams says, noting that it has never failed its clients. “We figure out whatever we have to do to make that water good enough to use on a frac job.”

Water Rescue Services caters to both major firms and independents, he adds. “We’ve tried to not just go after the big guys or the little guys,” he says. “We work for a lot of different companies.”

Its services for each firm may vary, Williams notes. Often, “We’ll handle their pit management and do their biocode frac treatment on the fly,” he says. “We’re trying to be as diversified as we can and not just be a one-trick pony.”

Several customers have won awards for using Water Rescue Services. “We love that,” Williams says, but notes that the company does not focus on winning any awards of its own. “We just focus on building a great company.”

Cleaning Up
Water Rescue Services offers its clients three different systems for recycling water. One is its EcoRenew EC system, a patented electrocoagulation process used on produced and flow-back water.

During the process, “We’ll flow the produced and flow-back water through a series of electrodes,” he explains, noting that the system charges the water, causing minute particles to drop.

“They attract the negatively charged ions and heavy metals,” he continues. “It forms a floc, and as you grow that floc, it starts to drop to the bottom.”

The EC system also kills bacteria, Williams adds. At the end of the process, “You’ve got good, clean, bacteria-free water,” he states.

The company offers another process through one of its sister companies, Water Busters. Using a membrane, the company removes sulfates and chlorides from water that is used again “for drilling and fracking,” Williams says.

Water Rescue Services’ third process treats the water with chlorine dioxide, which oxidizes the iron and different elements in the water and kills the bacteria, Williams says. When serving customers with this process, the company takes a trailer to its clients’ frac sites and introduces the chlorine dioxide as they are pumping water downhole during the frac job.

“We want to make sure that we [kill the bacteria] as they’re pumping down hole,” Williams says. “It ensures that you’ve got a good, clean well bore.”

Popular Work
Water Rescue Services’ work is ideal for the West Texas market, Williams says. “There’s a tremendous shortage of water in West Texas,” he says. “They’re looking for every kind of way that they can use the recycled water.”

Currently, “In West Texas, you can only water your yard on certain days,” he states, adding that in some instances, it’s cheaper to recycle water as opposed to buying fresh water. “There are some places in New Mexico where it’s $2.30 a barrel.”

The company’s services also are popular in Pennsylvania’s Marcellus Formation region. Although the area does not suffer from a water shortage, “There aren’t any disposal wells and waste water has to be trucked to Ohio,” he says.

Understanding Clients
Many factors have driven Water Rescue Services’ success, including its clients, Williams says. “We’ve been really fortunate to have customers that understand what we’re trying to do,” he says.

This includes environmentally conscious customers such as Fasken Oil & Ranch Ltd., an oil company based in Midland, Texas. “From day one, they said, ‘This is the right thing to do,’” he says. “More and more, we see additional business from completion engineers and oil executives that say, ‘We really need to do this.’”

“When we … pull out all the trash, the iron and suspended solids and send the water back for the frac job, you don’t have the compatibility issues like scaling, that you sometimes have with fresh water,” Williams says. “We’ve also seen a reduction in the swelling of clays.”

Several clients have reported improved results with the recycled water, Williams says. “Their initial production rates have gone up 25 to 32 percent,” he says. “They also love what we do because we’re keeping all these [water] trucks off the road. We’re saving hundreds of millions of gallons of water.”

Enjoying the Rewards
Water Rescue Services has served Fasken since July 2013. “We’ve treated a little over 3 million barrels [for them],” Williams says, noting that the company is at work on one of Fasken’s saltwater disposal wells.

“We hit the water with a little chlorine dioxide before it goes into the holding tanks,” Williams says. “It’ll help separate the oil and water so they get a better yield on their skim oil.”

The company is currently treating water for Fasken that has been previously treated “on 50 frac jobs,” he adds. “They own their ranches and wells and they want to be good stewards.”

Fasken Director of Oil and Gas Operations Jimmy Davis praises Water Rescue Services. “They’ve got very good people,” he says. “[We have] what I would consider very outstanding relationships between both parties.”

Fasken approached the company because of its own focus on green and drought conditions in Midland. “We didn’t have a lot of fresh water on the ranch that we operate,” Davis recalls. “We had to come up with another source of water.”

Thanks to its use of Water Rescue Services’ systems, Fasken recently won the 2014 Bruno Hanson/Midland College Environmental Excellence Award. “It’s nice, [but] we’re not out to get the attention,” Davis asserts.

“We’re just out to do what we think is best for the land that we’re on,” Davis continues. “It garners some attention [because] water is a big subject these days.”

He adds that Fasken will continue using Water Rescue Services. “Our plan is by the end of the year we will be completely free of the need for fresh water,” he says. “We’ll have [substituted it with treated] brackish and recycled water.”

People Focused
Water Rescue Services’ staff is another important factor in its success, Williams says. Recently, the company added to its team, which builds all of its equipment ”in our shop north of Fort Worth,” he says.

The company also keeps its associates heavily trained when it comes to safety. “One person can ruin our recycling process,” he declares. “We’re not going to take the chance of someone getting hurt.”

Water Rescue Services monitors its sites at all times, “because we’re very safety conscious and very people-safe,” he says. “What we normally have is a supervisor and [an associate] in training to be a supervisor on-site.”

Its staff is also trained to keep an eagle eye on the water it recycles. If they see something unusual, “They immediately take a sample,” Williams says. “Our company believes that you have to have people doing that.”

Essential members of its team include VP of Field Operations Pat McCurdy. “He oversees all of our construction,” Williams says. “When we go to a new site, Pat goes in and sets everything up.”

Another key member is Tarbet, who is “an unbelievable water technician and chemist,” Williams raves. “[Bryon and Pat] were with me in the beginning.”

Additionally, “We’ve got some pretty heavy industry veterans and investors in our company,” Williams continues. “I’m real fortunate to have the people that I’ve got working with me.”

Staying Positive
Business is strong for Water Rescue Services, but the company is encountering challenges, Williams says. “In West Texas, the labor pool is really tight,” he admits, noting that the company copes by “bringing in crews from other parts of the state.”

However, “As far as any road blocks from customers, there aren’t any,” Williams says. “The prices are very important to them, but our prices over the last year have come down as we’ve improved our technology.

“Everything’s positive right now,” he says. “It’s a great space to be in. It’s got a bright future. We’re just really happy that we’re doing this.”

Water Rescue Services plans to continue serving customers in West Texas, while moving into plays in New Mexico. This will lower its concentration in other areas, such as the Eagle Ford Formation.

“The reason is the percentage of flow-back water in the Permian is three times what it is in the Eagle Ford,” Williams says. “There’s just not as much water there to recycle.”

The brackish water treatment with Water Busters will be good fit in the Permian Basin, he adds. “[It’s] going to be a huge part of our business going forward,” he says, explaining that an offshoot of the treatment is a small percentage of unusable water that can be converted into fertilizer.

“We’ll be producing fertilizer that they can either use on the ranches where we go, or we can sell it,” he says. “It’s really a neat process.”

Water Rescue Services is in a good position financially, Williams adds. “We don’t have any debt,” he says. “We’ve got plenty of room to expand our manufacturing facility.

“We look for our company to really grow over the next few years,” he continues, adding that the company has high hopes for the coming year especially . “[We expect to] at least double our volume next year from the way things are looking right now.”