Back to Exclusive Features > Issue 171

The wave and tidal sectors have, to date, created significant economic benefits for Scotland. As per research conducted by the representative body, Scottish Renewables, the marine energy sector has invested over £190 million in Scotland – boasting high levels of Scottish content at around 62 per cent – making it an industry that has truly been ‘born and bred’ in Scotland. In addition to its strong domestic marine resource (Scotland provides up to 25 per cent of Europe’s total tidal power and ten per cent of its wave power), it is estimated that 337GW of marine energy could be 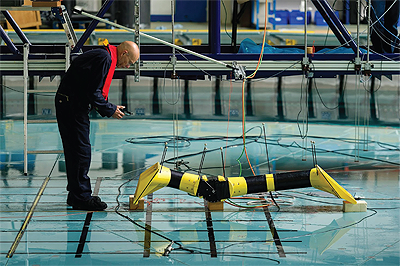 installed worldwide by 2050, creating a global market worth as much as £460 billion.

A subsidiary of Highlands and Islands Enterprise (HIE), Wave Energy Scotland (WES) was formed in 2014 at the request of the Scottish Government with the aim of ensuring that the country maintained its leading role in the development of the industry. “Early failures within the wave energy sector prompted a major re-think of how best to approach the challenges posed,” begins WES Managing Director, Tim Hurst. “What WES did was set out a fiveyear strategy, aimed at bringing continuity, structure and long-term confidence to the industry, in a bid to attract future investors.”

Through its competitive procurement programme, WES today supports a range of projects focused on the key systems and sub-systems of wave energy converters, with the goal being to produce reliable technology that will result in cost effective energy generation. Through its work, WES has funded no fewer than 86 contracts, invested £38.6 million, and been involved with 200 separate organisations, across 13 different countries. This includes work with a number of academic institutions in the UK, Ireland, Belgium and Italy, as well as UK and European companies.

At the heart of WES’ efforts to promote R&D within the sector is the WES Technology Programme, which Tim goes on to explain in more detail. “WES offers 100 per cent funding for R&D proposals through our three-stage programme, and in the past, it has not been uncommon for us to fund several projects at once through this means,” he says. “At stage one, when we open what we refer to as an ‘Innovation Call’, we typically ask for concepts. From here, rigorous assessment and evaluation is carried out before we select the best projects to continue to stage two, where they receive further funding. A similar process then occurs at stage three, until we are left with the best possible technology. These evaluation stages ensure that we are working with the best in all of our four programmes for power take-off, novel wave energy converters, control systems, and structure materials and manufacturing processes.”

Innovation Call
It is the above documented approach that WES will now be looking to apply to its new call for quick connection systems. “Quick connection systems represent the next subcomponent to be developed by WES in its multimillion pound wave energy technology programme,” Tim continues. “The ideal technological solution would function in large wave conditions, connect quickly to 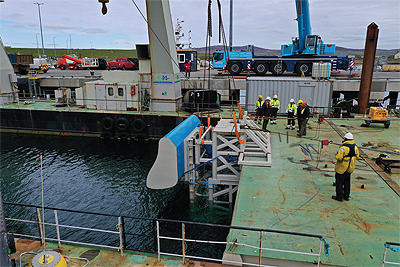 reduce maintenance costs, and increase safety by operating remotely. The connection systems would be an integral element of the mooring system, the electrical system, or both for the wave energy devices. Furthermore, it is likely that suitable systems can be used or adapted for other sectors in the future, such as automotive, offshore wind, mining, aerospace, defence, robotics, maritime, and oil and gas.”

Successful applicants to the Innovation Call for quick connection systems will undertake a feasibility study on their proposed technical solution in stage one, followed by the design and analysis of this solution in stage two, before moving to the build and test phase at stage three. WES will offer up to £70,000 (excluding VAT) per project of up to a duration of three months, with applicants free to contribute further funds if desired. Applications must be submitted by 12:00BST (GMT+1) on 16th September 2019.

Industry event
As each year comes to a close, WES holds its Annual Conference in December, and plans are taking shape nicely for the 2019 event. “This year, we have invited the Minister for Energy, Connectivity and the Islands to give our keynote address for what will be the second time, and we anticipate in the region of 200 delegates to attend,” Tim reveals. “The event brings together a huge number of industry representatives and, as you can imagine, provides for an excellent networking opportunity.”

The rest of 2019 will no doubt prove to be highly fruitful for WES and the wider sector, with four of its power take-off devices being tested this summer alone. Meanwhile, it also has its sights set on what next year will hold. “2020 will be an exceptional for WES,” Tim enthuses. “We anticipate having two wave energy devices in the water for at-sea testing in Orkney. These devices have proved themselves in the tank testing phase, and we expect positive results from the larger scaled models operating in sea conditions.”