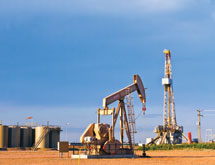 With production rates of more than 600,000 barrels a day and an estimated reserve of more than 4 billion barrels, it’s no surprise that the Bakken Shale formation in the Williston Basin in Montana and North Dakota is one of the most prominent oil exploration sites in North America.

One of the shale’s largest producers and acreage holders is seeing continued growth there while also setting its sights on several other hot spots in the United States. Denver-based Whiting Petroleum controls 1.1 million gross acres and 712,000 net acres of land in the Bakken in North Dakota, making it the second-largest oil producer in the state.

“We’ve had a 100 percent success rate in the first quarter of 2012,” COO Jim Brown says. “We’re confident this is a project that’s going to work for us.”

As the Bakken is an unconventional hydrocarbon reservoir, oil contained there cannot be produced using conventional oil and gas production techniques. “The technology we are utilizing today to produce oil from the Bakken did not exist 10 years ago,” Brown says. “Whiting drilled a horizontal well in 2006 that employed a multistaged fracture stimulation that was very successful, and that was the beginning of what has developed today in the Bakken.”

Horizontal drilling is utilized on production projects with depths of more than 10,000 feet below the surface. “We are focused primarily on organic drilling activity, both on grassroots oil plays and on the development of previously acquired properties, and specifically on projects that we believe provide the opportunity for repeatable success and meaningful production growth,” the company explains. “We consider ourselves world-class oil and gas finders.”

Technical Acumen
Whiting Petroleum’s drilling department and geotechnical staff are credited with giving the company the ability to meet its goals of transitioning from the exploration phase to development as soon as possible.

“Our staff is able to help us early in the exploration process,” Brown says. “They’re able to put us in the right position so we can go out and lease land and secure mineral rights.”

Brown cites the company’s work in the Denver-Julesburg basin as an example of its ability to quickly turn projects around. Five horizontal exploration wells were drilled there in early 2011, with the results from that drilling analyzed later in the year.

Core samples from Whiting’s drilling efforts in the Julesburg basin and elsewhere are analyzed in an geoscience core lab located in its corporate headquarters in Denver. Geologists utilize scanning electron microscopes and other equipment to determine if the particular reservoir has the potential to produce hydrocarbons, along with the samples’ mineral content.

“We are one of the few companies that has the capability to do this in-house,” Brown says.

One of the things Whiting’s geologists are on the lookout for is the presence of clay particles, which swell up on contact with water, preventing hydrocarbons from leaving soil.

“Many companies rely on third parties for this sort of information,” he adds. “We can shorten the time it takes to get this information by doing it ourselves.”

The company’s geological staff is composed both of experienced geologists as well as younger scientists. “We have a number of young and innovative people mixed in with sage and experienced folks,” Brown says. “We give those two groups an opportunity to really learn from each other through our in-house training program.”

Whiting Petroleum says the application of its geological lab and other technology is key to the company’s continued growth.

“We will continue to take the technology we have developed and push for new areas in which we can employ it,” Brown adds. “We’re looking to use our strengths in a novel and unique way that gives us an advantage over the competition.”

Loyalty Counts
While Whiting has the ability to conduct its own geological testing, it still believes in building strong relationships with partners including other oil and gas producers. Several of the company’s Williston Basin-based projects are partially owned by other companies, and Whiting also contracts with well service and transportation companies to complete its production.

“We try to be loyal to our vendors,” Brown says. “We have good relationships with drilling contractors and companies we use to complete our wells.” Some of the company’s key partners include Baker Hughes, Inc., an oilfield services provider with more than 58,000 employees working in more than 80 countries.

“We have employed their FracPoint® stimulation system on almost all of our well completions in North Dakota,” Brown says. “In 2006 we were limited to being able to pump 10 frac stages. Advancements to the equipment have been made and we now have the capability to pump up to 40 stages utilizing sliding sleeves.

“We have worked with the Baker Hughes drilling support groups to further our ability to become one of the more efficient drillers in the Bakken.”

The FracPoint multistage fracturing system offers continuous hydraulic fracturing through the use of ball-activated frac sleeves. The system reduces overall pumping time while maximizing reservoir contact to increase drainage, according to Baker Hughes.

“We isolate each stage with hydraulic-set openhole packers or reactive element packers. When the frac is complete for one stage, the ball for the next stage is dropped into the flow path without shutting down the pumping operation; this is superior fracturing efficiency,” the company explains. “After completing a hydraulic fracturing operation, the balls flow off seat when the well is put on production or the balls and ball seats can be milled out to achieve the full production diameter.”

FracPoint is used in a number of unconventional reservoir applications including tight gas and coalbed methane, the company adds. EMI