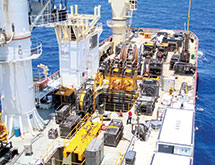 Wright’s Well Control Services prides itself on engineering and executing numerous first-to-market services for its clients. The company currently has 17 patents pending and two were recently issued, including a proprietary open water abandonment system.

Founder and President David Wright presented the company’s new open water abandonment system in February during the Deepwater Decommissioning Workshop in Houston, Texas. He explained how the riser-less system with multiple barriers and a sequenced emergency quick-disconnect system works and described its benefits. “Right now, we are the only approved system by the federal government to do open water plug and abandonment,” Wright notes.

Wright’s Well Control Services sets itself apart in the industry through continuous innovation and forward-thinking processes. The company is setting trends and breaking boundaries with its proprietary products, including the Modular Connector, EQD, Heave Compensation System, Single Drum/Dual Lines Coiled Tubing Unit, Subsea Tools, and its highly efficient and streamlined services that begin with its highly detailed pre-job risk analysis.

Wright founded the Louisiana-based company in 2006. He entered the oil and gas industry in 1984 right out of high school. “I got in it to make some quick money and was going to go to college and pursue other things,” Wright remembers. “I must have made enough money though because I’m still here.”

All joking aside, Wright says with the knowledge and expertise he gained from working in the oil and gas industry at an early age he was able to see obstacles and solutions in a different way. He realized that there are things that could be done better and more efficiently, and decided to make a bold career move.

Wright’s Well Control Services was founded on Wright’s vision to form a company with a versatile core of skilled professionals who could consistently deliver superior quality offshore products, one-of-a-kind equipment and top-tier services at a competitive price. “We are a small, independently owned company that believes in the old school that shaking a hand seals a deal and we stick with it,” he says.

Valuable Relationships
Maintaining good relationships and developing strategic business partnerships with vendors are key for Wright’s Well Control Services. The company focuses on partnering with smaller companies like itself to ensure its equipment is made right. “We make sure our equipment doesn’t go down or fail,” Wright says.

Wright’s Well Control Services’ reputation for being an honest company has been one of its reasons for maintaining a number of loyal clients. “We believe in repeat customers and achieve that because we are upfront and honest,” Wright notes. “We provide clients with the big picture and what it takes to get the job done. No sugarcoating, just straight to the point solutions to help them save time and money while giving them unmatched quality and service.”

The company believes getting the job done safely and correctly begins by providing clients with highly trained and qualified personnel. To do so, every one of its nearly 50 employees has been through or is in the process of taking an extensive, six-year operations and safety training program.

“It’s extensive training because we want to make our employees smarter and make sure they are trained on what we do,” Wright says. “I want them to understand the full process of drilling an oil well, including how it’s found and how it progresses to tying the plug and abandonment.”

Future Stability
Although the industry has slowed, Wright’s Well Control Services continues to move along steadily with contracts it has secured. Wright says the company does not plan to lay off its employees because most subsea deepwater wells are too far developed and can’t stop despite the drop in price.