Back to Profile Gallery > 1776 Operating & Energy 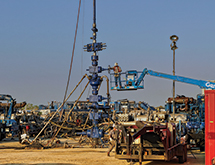 1776 Energy Operators LLC’s focus on minimizing costs while maximizing results has made it one of the Eagle Ford shale play’s most successful upstream oil producers. The Houston-based company, formed in July 2013, operated three of the play’s highest producing wells in the fourth quarter of 2013.

The company manages roughly 4,650 BOE from 46 wells, on which it serves as the main operator, and 31 wells where the wells are operated by companies including Marathon Oil, Murphy Oil and BHP. Total lease hold is 32,000 acres.

1776’s main operating strategy is to develop and hold its acreage and to reinvest cashflow to increase daily production. “We expect to exit 2014 with a daily oil rate in excess of 7,000 BOE,” President Rick Bobigian says. “We are formulating the 2015 budget and expect to drill another 9 to 10 operated wells.”

The company plans to add to its existing assets by drilling nine additional wells before the end of 2014. All of 1776’s wells are Eagle Ford wells that are drilled horizontally and fracked. “We want to drill and complete each well for the lowest cost possible using quality goods and services allowing us to maximize our value,” Bobigian says. “We’re trying to drill and complete all of our wells efficiently and at the lowest cost possible to maximize the return on invested capital.”

Best Practices
One way 1776 Energy maximizes production of its wells is by continually improving its fracking techniques. “We’re employing the best practices for the unique geology of the Eagle Ford play,” COO Bob Munn says. “What that entails, for us, is using better fracture stimulation treatments to crack the rock and to prop the cracks open.”

The company recently increased the number of stages to its fracking process. “We have developed a recipe that is very effective in making the Eagle Ford flow at higher rates,” Bobigian says. “For example, we use 1,750 pounds of monocrystilline sand per foot of lateral where the industry average is 1,200 pounds of sand. We also take into account the rock properties of the Eagle Ford and use hydraulic fracturing to its maximum effectiveness.”

The company achieved significant cost savings in its operations in part by lowering the cost of transporting the oil from well sites to the market. “Rather than sell to one purchaser, we pick a purchaser in each region that offers us the same oil price model but has the lowest transportation cost. Typically that purchaser has a strong advantage in one region over another and thus can offer a lower transportation cost,” he adds.

Overcoming Challenges
1776’s ability to create efficiencies within its operations and step up its oil production helps the company manage the challenges of producing its Eagle Ford holdings. Land related issues, holding its acreage and managing mineral owners’ expectations are chief among these challenges, Bobigian notes.

Selling the associated natural gas produced from Eagle Ford oil wells is equally challenging to the company. The infrastructure of pipelines, gathering systems and gas processing plants necessary to treat and transport natural gas to market is growing to meet the supply, but gas supply exceeds capacity, creating bottlenecks and delays.

Attracting and retaining qualified personnel amid a competitive environment is another challenge. “There’s a tremendous demand for people with good talent and good skills,” notes Larry Bynum, vice president of operations. “We have to be innovative in order to hire and retain quality people in a very tight market. Of course, everyone wants to get paid for their work, but talented professionals want to make a contribution to the overall success of the company and they want to be heard. Those ideas have allowed us to create world-class Eagle Ford producing wells and allowed us to retain talented professionals.”