Individually, 3 Bear Energy, LLC’s core services of crude, gas and water gathering and processing are common within the Permian Basin. It is rare, however, to find one midstream provider capable of performing all of these services and more.

“We are one of the leaders in the region offering a four-stream solution of oil, gas and water delivery and water re-distribution, and that is one of the main things that sets us apart,” says Scott Spicher, executive vice president and COO of the Denver-based company.

“We also understand the importance of partnering and working with land owners in the area and becoming a part of the community,” he adds. “This creates a win-win not just for us, but also the producers and the land owners.”

In addition to wellhead gathering, the company offers a full suite of midstream services including compression, processing, nitrogen removal and acid gas treating; water treating and water return for fracking; salt water disposal; and crude terminalling and storage. 3Bear Energy serves clients in the northern portion of the Delaware Basin section of the Permian in southern New Mexico. 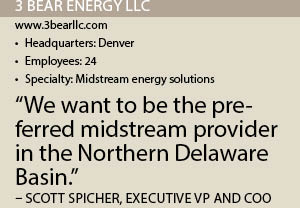 Full Capabilities
The company is building more than 200 miles of gathering pipeline, through which it collects and transfers water, gas and crude oil. The first sections of its pipeline have already been commissioned.

Gas is gathered directly from the wellhead and sent to a cryogenic gas plant in Lea County, N.M., that is capable of processing 60 million cubic feet of gas daily. Processing includes removing gas liquids such as ethane, propane, butane and natural gasoline and sending the remaining residue gas to long haul pipelines that interconnect with 3Bear Energy’s.

“We have a connection with a major natural gas pipeline in the area, and we are coordinating multiple interconnects with others to provide producers with access to multiple liquid markets helping to assure the flow of liquids and residue gas for our customers,” Spicher says.

3Bear Energy’s central gas plant was designed to easily expand to eventually handle 100 to 200 million cubic feet of gas. The gas plant is co-located with a crude oil terminal on a common 60-acre site. The terminal receives oil gathered directly from the same wellhead as natural gas. 3Bearoperates Lease Automatic Custody Transfer units that provide for the measurement, sampling and transfer of oil from the lease into its pipeline.

Crude oil brought into the terminal is stored and then transferred to a takeaway pipeline. The company has an interconnect with one pipeline already and is negotiating other interconnects, Spicher notes.

3Bear Energy’s water gathering capabilities involve pumping and metering water received at the wellhead and sending it to its central facility in Lea County, which also includes a 250,000-barrel impoundment pit and saltwater disposal well.

“When we receive water, we have the ability to send it into a storage impound or saltwater disposal well. We also have the ability to redeliver water from the storage impoundment back to wellsites for support of producers’ drilling operations,” Spicher says. “We can recycle the production water – which is unique – and treat it and re-deliver it, saving producers hundreds of thousands of dollars on water costs.”

Industry Experience
3Bear Energy credits its understanding of the midstream energy industry to the knowledge of its founder and top executives. “For producers looking to capitalize on today’s Western shale plays, we offer a unique combination of commitment to customer service, knowledge of midstream solutions and the comprehensive resources to rapidly get your product from wellhead to market,” the company says.

“We bring to the table a respected, senior-level industry-side management team with more than 200 years collective experience and a proven track record of innovative, cost-effective solutions for oil, water and natural gas production,” 3Bear Energy says.

The experience of 3Bear Energy’s executive team helped it attract the backing of private equity firm GSO Capital Partners as well as Wells Fargo. GSO is the global corporate credit platform of the Blackstone Group LP, a multinational firm based in New York City.

In High Gear
3Bear Energy’s gathering and processing facilities in Lea County will be fully operational by Q3 2018. “We were in business development mode for several years, and the downturn in commodity pricing made it a challenge,” Spicher says.

3Bear Energy’s development kicked into high gear however in August 2017, when it signed Fort Worth, Texas-based Chisholm Energy as its anchor shipper. Founded in 2016, Chisholm is focused on acquiring and developing petroleum properties in the Northern Delaware Basin.

“We were diligent during the downturn in oil prices and didn’t give up on our quest to find an anchor in a good section of the Permian,” Spicher says. “Finding an anchor producer that was the right fit for our team and building a great relationship with them was key to our success.”

“We want to continue to build on the accomplishments we’ve already made,” Spicher says. “What is key to us right now is to get our assets operational and prove our ability to execute and deliver on those assets to the producers in our area.”