Although a relatively new venture, A.Hak Drillcon (part of A. Hak which celebrated its 50 years’ anniversary in 2013) has developed a leading reputation in the field of trenchless technology, specialising in the design and execution of underground tunnelling and drilling of pipelines, casings, culverts, cables and more for the oil and water, petrochemical, telecommunications and energy industries.

“On the 18th of December 2014 we celebrated the fifth anniversary of A.Hak Drillcon,” observes managing director Ronald Van Krieken. “In 2009, we started small-scale and since then we have become a global player in trenchless technology with over 100 highly motivated and hard working staff. We are all very proud of reaching this milestone and we have undertaken some technically challenging and large-scale projects, as well as many smaller drillings.”

To date A.Hak Drillcon has executed a number of highly specialised projects for both internal and many external clients, within Europe, Canada, South America, the Middle East and Asia. Throughout 2014 A.Hak Drillcon has continued to win new contracts within a number of industry sectors as Ronald elaborates: “In September 2014 A.Hak Drillcon was awarded a contract by Energie und Wasser Potsdam (EWP) for the execution of five HDD crossings under the Brauhausberg (‘Brewery hill’) in Potsdam, near Berlin. These crossings are part of a new 110 kV and 10 kV cable network, which is being constructed in the city of Potsdam. The works comprise of the supply, welding, drilling and pull-in of HDPE ducts in bundles of 4x200mm and 110+160mm. After completion, EWP will pull its electricity cables into these ducts. The total length to be drilled is 1700m. The crossings commence at the Geotechnical Research Institute at the Brauhausberg and terminate at various junctions at street level.”

Further to the contracts that it has won with EWP, A.Hak Drillcon has also worked closely with Gasunie Deutschland and Open Grid Europe throughout 2014, as Ronald further explains: “Gasunie Deutschland and Open Grid Europe have recently awarded the drilling works associated with the Elbedüker project to A.Hak Drillcon as main contractor. The project comprises of the tunnelling of a concrete casing under the river Elbe, to accommodate the new gas pipeline that will secure the safe supply of natural gas to Northern Germany and Scandinavia.

“The permits were successfully obtained and on 14th August 2014 drilling commenced in a 24-hours double-shift system and on December 4th 2014 we concluded the drilling. The length 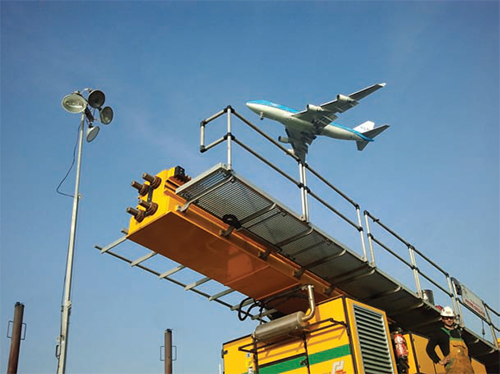 of the route is 1525m. The AVMD 2400/AB 3000 machine is deployed for the insertion of the concrete casing. Subsequently, two highpressure gas pipelines of 30’ will be inserted into the tunnel in addition to a few bundles of HDPE ducts for future cable use. The remaining void will then be grouted entirely.”

A.Hak is able to supply its clients with fully turnkey solutions in trenchless drilling technology, encompassing everything from engineering to applying for a license. Once the company has been given the location and the preconditions of crossings it has all of the information it needs to produce a complete design and secure the necessary approval. Once the application is granted, A.Hak will move swiftly into execution of the project. As such, the company ensures that it is able to offer its clients a full spectrum of trenchless technologies including horizontal direction drilling (HDD), up to 500 ton capacity, micro tunnelling up to OD 3.000mm; direct-pipe drilling; pilot guided auger-boring and impact ramming. Besides its existing technologies, within A. Hak Drillcon a dedicated team works on innovations on a daily basis in order to provide it’s clients the best solutions, now and in the future.

Between May 2013 and April 2014, A.Hak was involved in a project that made use of a number of its specialist trenchless technologies for its client, Gasunie. ‘Gas Hub’ represented a significant investment for Gasunie that would transform into an integrated gas infrastructure utilised for the production, transport, storage and transit of gas for the European market. One of the major operations within this project was the construction of a new gas transport pipeline between the Dutch towns of Beverwijk and Wijngaarden. A.Hak Leidingbouw and A.Hak Drillcon was granted two of the three lots of this trajectory and thus became responsible for the construction of 60 kilometers of this 48″ gas transport pipeline. This was a challenging project, in part because of the surrounding soil conditions and water management requirements and also due to the abundance of railroads and waterways in a varying landscape. This left it up to A.Hak to ensure that it delivered the most suitable drilling solution at every location.

Horizontal directional drilling, for example was employed for long crossings. HDD operations were carried out using a 250, 330 ton mega rig and later a 500 ton mega rig. These operations were complicated by the presence of ground water so the rigs were often deployed on mounds and special return pipelines for drilling fluid were constructed both above and below the surface. Throughout the project micro tunnelling was carried out using medium-capacity steel gas pipelines, while in areas containing railroad crossings concrete case tubes were used. Adjacent to Highway A4 near Hoofddorp, close to Schiphol International Airport, the local N201 road and its neighbouring business park were crossed using the direct pipe method. This method was selected as the available space was limited and this drilling method allows for work with short pipeline sections.

Although A.Hak Drillcon is a relatively new business, it has rapidly developed a leading reputation as a vital partner in trenchless technology through the delivery of several specialised technique and swift, turnkey service. As such, the journey of A.Hak Drillcon is set to continue for many years.