The development of Lithuania’s first LNG terminal was completed in December 2014 year and has already had a major impact on the country’s energy industry. “There were two primary reasons why the project was initiated,” LNG department director, Tadas Matulionis explains. “The need to ensure the security of gas supply, and to diversify the country’s sources of gas; to have an alternative.” Throughout Lithuania’s independent history up until the end of last year, the gas industry was monopolised by Russian gas supplied from the east, and the country’s consumers were paying the highest prices in Europe despite being closer to the source than many. “Consumers in 2013 were paying 38 euros per megawatt hour,” says Tadas. “Within a couple of months of the terminal’s operation we were already seeing deals in the gas market of just over 18 euros.” Beyond financial implications, Tadas notes: “Ultimately, in terms of security the terminal can supply as much as would be needed if supplies from the pipeline were stopped. Before the terminal a report showed that the Baltic countries of Lithuania, Latvia, Estonia and Finland were 100 per cent vulnerable to any supply disruptions, but now with the terminal Lithuania is fully secured, and the rest of the Baltic is significantly more secure.”

With construction of the terminal beginning in 2012, the state established a deadline of December 2014, a short time period that to the great extent determined the technology that could be used for the project. “Land based technology can take significantly longer to build, so FSRU (Floating Storage and Regasification Unit) technology was chosen,” explains Tadas. “The contract for the FSRU was signed in March 2012.” The 294 metre long FSRU vessel ‘Independence’ was supplied to Klaipedos Nafta by Norwegian company Hoegh LNG, and was completed last year by Hyundai Heavy Industries in South Korea. It finally moored at Klaipeda port in October 2014. The vessel has a capacity of 170,000 cubic metres of LNG, can regasify four billion cubic metres of gas a year, and is the most northerly of all FSRU units in the world. Amongst other reasons, Klaipeda was chosen as an ideal location for the project as it only ice free port on Northern Baltic coast. Operating in cold waters means that the unit has been specialised to operate within harsh temperatures with a dual cycle system, and a number of winterisation elements to ensure safe and efficient operations.

As a major commercial port, Klaipeda was already well suited in terms of economic activity to situate the terminal. The layout of the port also protects the terminal from one of the harshest sea climates in the world ensuring complete operation throughout the year. To accommodate the FSRU a marine jetty and transmission to the main grid had to be constructed. Despite the tight schedule all the workhad 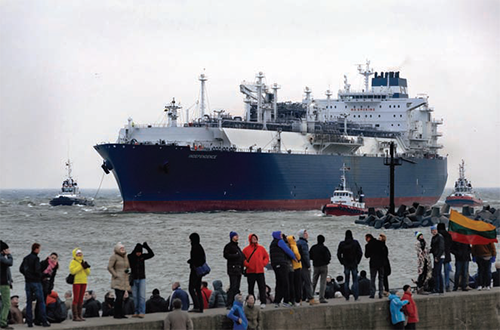 been carried out in such a short time frame. Not only did the choice of technology facilitate the speed of construction for the terminal, but the nature of the project in terms of national interest was also a factor. “The project was received as a strategic one for the country,” highlights Tadas. “There was great support on all governmental levels, even involving the Prime Minister’s supervision. This has helped significantly to streamline all permissions, consents and co-ordination of all activities.

However, despite strong support from the government and the technology available, being the first LNG terminal in the country created a number of challenges that had to be overcome by Klaipedos Nafta. Tadas points out: “It is also the first in the broader region, so unlike in other countries where they have existing terminals, we had to very quickly attract and develop competencies for the project teams and future operators to make the project operational.” Existing infrastructure also posed a problem as the grid was only set up to receive gas supplies from the East, so the grid had to be reworked and strengthened to enable flow from two directions. Legal and administrative modifications were also needed so that from how customs deal with the new commodity, right down to the consistent use of energy units all had to be managed. “The biggest challenge for any project manager when all work streams are parallel is managing so many interfaces without making mistakes,” adds Tadas.

Now operating, the terminal at Klaipeda has been successful in opening up the gas market for Lithuania and the region. “One of the aspects from the commercial structure of the terminal is that Klaipedos Nafta is only an operator and is not involved in gas trading at all,” discusses Tadas. “We are a completely open terminal and offer our capacities to every player on the market on exactly the same terms. This enables there to be alternatives and, critically, competition in the market.” Its main customers at the moment are energy producers in Lithuania, who use the natural gas to produce heat, electricity or both for the consumer market. Alongside its regasification service, which is the primary purpose of the terminal, it is also able to provide LNG reloading service and in the near future – number of smaller scale LNG activities along the Baltic coast. Tadas notes: “We have seen a huge number of these smaller terminals, which have less than 30,000 cubic metres of storage capacity, and we feel that we are very well positioned for these terminals”.

Looking forward for the terminal, Tadas sees a positive future defined by further development and exploring new market opportunities. “First of all we are looking to streamline our operations to become the most efficiently managed LNG terminal in the world, this was set by ourselves and our shareholders. Secondly, we are currently developing, and are due to start construction of an additional land based reloading station, the primary function of which will be to load LNG onto road tucks. We see a market in the broader region to supply a number of industrial customers and towns who are off grid or are willing to use an alternative source. We are aiming towards the end of 2016 as an operational date for this project.”

A wider strategic vision is to become a regional hub for natural gas for grid and small-scale supply. The geographical position and open market attitude gives Klaipedos Nafta a strong starting point to achieve this. In terms of the applications of LNG, Tadas concludes: “We are also trying to look beyond the traditional services of regasifying or supplying LNG. We are looking at LNG as a potential source for broader applications where it can be more convenient and cost efficient than current methods. We are working in parallel with a number of potential customers in relation to this.”

Ultimately, the development of Klaipeda LNG terminal has had a major impact on the state of Lithuania’s energy industry. With significant benefits already emerging only months into operation, and high profile support from the government, the future of the terminal looks bright. The next few years look set to extend these benefits to neighbouring countries, and Klaipedos Nafta’s open approach to supply and efficient operations puts the terminal at the forefront of the whole region’s gas industry.