Developed with an aim to ensure the security of Lithuania’s gas supply, as well as to diversify the country’s sources of gas with an alternative mode of delivery, the country’s first LNG terminal was completed in October 2014 and quickly made a significant impact on the region’s energy industry. If necessary, Klaipeda LNG terminal can meet up to 90 per cent of combined Lithuania’s, Latvia’s and Estonia’s annual gas demand. There is no doubt, that Lithuanian LNG terminal has had a huge positive impact on the Baltic gas market already and further benefits expected with Latvian gas market liberalisation in 2017.The Klaipeda LNG terminal is owned and operated by KN (AB Klaipedos Nafta), which presently also owns the busy Klaipeda and Subacius oil terminals and has continued on a targeted course of development to ensure that its facilities will endure as a major contributor to the energy needs of Lithuania. Indeed, having previously been profiled by Energy, Oil & Gas during July, 2015 Klaipedos Nafta has invested in the further development of new and existing facilities, while implementing changes within the running of the business to ensure that Klaipedos Nafta continues to deliver energy solutions a peak efficiency.

During Q4 2016, KN announced a change in the board of the company, with Rytis Ambrazevicius taking the decision to resign as of the 1st December 2016. Giedrius Dusevicius was subsequently elected to undertake the duties of an Independent Board Member of the company until the term of office of the acting board. The company also subsequently made changes to the internal composition of the board, with its supervisory board adopting the decision to elect Bjarke Palsson to take on the duties of Independent Board Member to fill the existing vacancy on the board from 24 January, 2017. There was also an important change to the management of the company with Marius Pulkauninkas becoming Acting General Manager of KN, following the resignation of Mantas Bartuška at the end of 2016. Mr. Pulkauninkas until that was the Director of the Finance and Administration Department within KN.

Klaipedos Nafta also took the decision to renew its logo and company branding during Q4 2016, with the unveiling of a new corporate identity on 22nd December. The new logo features the letters 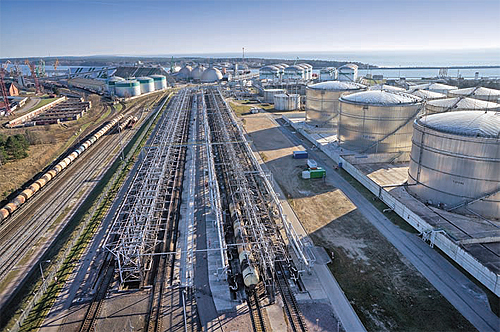 ‘KN’ and was created with a focus on the history and values of business, which are comprised of initiative, professionalism, transparency, reliability and social responsibility. The logo is accompanied by the slogan KNowledge Driven. “Our company holds an important position in the country’s energy sector, so we must not only aim for good performance results but also have a professional visual identity,” says Acting General Manager, Marius Pulkauninkas. “The new logo is a symbol of global geographical coverage, representing the interests of Lithuanian society and creating a value of partnership across the whole world. In renewing our logo, we have strived to make our business appear modern by maintaining its visibility.”

Further to enhancing its management structure and corporate identity, KN is also investing in the development of its LNG infrastructure. The company is currently undertaking the construction of a small scale LNG terminal, which will operate as a dedicated reloading station with LNG tanks comprising a total storage capacity of 5000 cubic metres. The reloading station will deliver LNG gas from FSRU ‘Independence’, which is delivered via LNG carrier, to be further redistributed by LNG trucks. Once the reloading station goes into operation during the second half of 2017, the facility will incorporate two LNG truck loading sites. The site also has the potential to be further expanded to incorporate a total capacity of circa 10,000 cubic metres of LNG tank storage.

Once the completed station begins operation, the port of Klaipeda will become a land-based LNG distribution hub for the Baltic countries and North-Eastern Poland and will operate on the KN site situated along its jetty. The LNG transhipped to LNG trucks at the KN terminal LNG reloading station will be identical to the gas used in homes or for industrial purposes, however it will be in a liquid state and cooled to -161 degrees. This means that the fuel will take up to 600 times less space than in its gaseous state. LNG is also an odourless, colourless, non-explosive, non-toxic and non-corrosive substance – making it an excellent and reliable source of energy.

Klaipedos Nafta has also recently expanded its co-operation with operators within the Norwegian LNG market. During November 2016 Klaipedos Nafta signed a memorandum of understanding regarding co-operation and concentration of expertise in the field of LNG terminals with the Norwegian company, Kongsberg Maritime AS. Through this agreement the companies have agreed to co-operate in the fields of floating regasification (FSRU) operations; LNG terminal technologies and systems; FSRU simulation models and scenarios (maintenance operations and cost optimisation); simulators as the design and planning tools; small-scale LNG bunkering operations; and international LNG terminal projects.

With an impressive array of projects and enhancements across the business, KN is quickly establishing an enviable reputation within the burgeoning LNG market within Lithuania and beyond. This was aptly demonstrated by the company’s award of the ‘Most Visible Improvement Over Three Years’ category, as well as 2nd place as the ‘Best investor relations in Baltic’ and further two accolades at the Baltic Market Awards 2016. “These awards are evidence that we are working in the right direction and encourage us to further improve our relations with investors, shareholders and the public,” Marius concludes. “We value professional relations that determine trust in both the company and its operations and therefore, we will continue to follow the set direction of close and transparent co-operation with the participants in the stock exchange.”