The Adriatic LNG Terminal is a strategic infrastructure for Italy and Europe in the global natural gas supply chain.

Natural gas meets more than one third of Italy’s energy demand and is considered as a key resource for a more sustainable future due to its high efficiency and versatility, the wide availability of natural gas reserves and because it is the less carbonintensive of the major energy sources. In 2013 Italy consumed 70.1 billion cubic meters of gas, 89 per cent of which was imported by pipelines or Liquefied Natural Gas (LNG) carriers.

Adriatic LNG built and operates the terminal located about 15 kilometres off the Veneto coastline of the North Adriatic Sea in Italy that provides more than ten per cent of the overall gas domestic demand since 2009, and most of the LNG supplies in the last years. Adriatic LNG is a joint venture owned by Qatar Petroleum, ExxonMobil and Edison and is now a solid cog in the Italian industrial wheel, with approximately 125 employees located in the headquarters of Milan, the Shore Base in Porto Viro (Rovigo) and the offshore terminal. 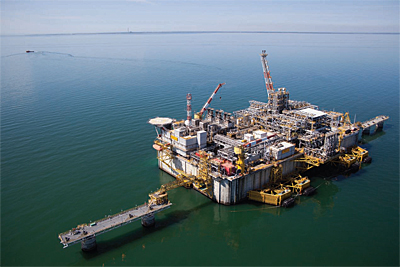 The terminal, a unique infrastructure in the world, won the 2010 Platts Global Energy Award – an international award for technological and strategic excellence. It has a regasification capacity of eight billion cubic meters/year and in 2013, 64 per cent of it was used, compared to an average use of European terminals that is three times lower (22 per cent), in a highly competitive environment characterised by a prolonged economic recession and weak energy demand at a European level.

Overcoming the need for a direct link with gas production areas through pipelines, the regasification terminal has allowed Italy to increase its sources of energy supplies, importing LNG from five countries: mainly from Qatar but also from Egypt, Trinidad and Tobago, Guinea and Norway.

The terminal started up in September 2009, after a long and complex authorisation process and a construction and commissioning phase that mainly took place at the Campamento basin near Algeciras, in southern Spain. Its compliance with the highest safety and environmental standards, as evinced by the over 20 million hours of labour employed in the creation of this structure, has earned the industrial hub of Campamento a prestigious Spanish recognition: the Prever Safety Award.

Such an ambitious project could not have been achieved without the contribution of professional knowhow from around the globe, now reflected in the daily management of the terminal’s operations.

And of course, the terminal owes much of its success to the sound relationships established with the local communities and authorities, marked by fairness, openness, collaboration, and continuous dialogue.

With more than 350 LNG carriers that have arrived to the terminal and more than 29 billion cubic meters of gas sent to the domestic pipeline network up to November 2014, the Adriatic LNG terminal has played a strategic role for Italy, contributing to the security of the domestic energy system, especially in situations of international crisis, such as the interruption of supplies from Transitgas and from Libya.

“We are a sound company that looks at the future with confidence”, says Elizabeth Westcott, Adriatic LNG managing director. “While always putting safety first, we aim to consolidate our position at national and European levels, ensuring the integrity and reliability of our facilities in an environmentally responsible way. Thanks to our ability to combine operational excellence and environmental sustainability, we are committed to providing innovative and reliable services that can respond to market challenges and help the Italian gas system to increase competitiveness and security.”

A gateway for energy in Italy and Europe
80 per cent of the regasification capacity of the Adriatic LNG Terminal – about 6.4 billion cubic meters a year, equivalent to about 73 LNG carriers from Qatar based on a supply contract with RasGas – has been allocated by Adriatic LNG To Edison for a period of 25 years (until 2034).

Of the remaining 20 per cent available to other operators, about 1.6 billion cubic meters a year, 12 per cent – equivalent to 12 LNG carriers a year – has been allocated to another gas operator for a period of ten years (until 2019).

The remaining capacity currently available, amounting to about 600 million cubic meters a year and corresponding to six LNG carriers a year, is sold on the market by means of capacity subscription procedures (on an annual, monthly or spot basis).

This energy travels the seven seas free of any physical link between the producer and the consumer, reaching the Italian shores through the Adriatic LNG Terminal. The terminal thus provides abundant clean energy, fostering internationalisation and bridging the gap between the regional macroareas that produce LNG and the European gas market.

Recently Adriatic LNG has started providing innovative services that can create added value for its customers and increase the competitiveness and security of the European gas system. The regasification terminal can, in fact, offer:

The design
Designed around a large concrete structure that houses two LNG tanks, a regasification plant and facilities for the mooring and unloading of LNG vessels, the terminal is 375 metres in length and 115 metres wide; the main deck is 18 metres above sea level, with the top of the flare tower reaching 87 metres above sea level.

Made up of 90,000 cubic metres of cement and 30,000 tonnes of steel reinforcement, the GBS was created at the Campamento construction site in Southern Spain. The LNG storage tanks, located inside the GBS, each boasting a capacity of 125,000 cubic metres, are made of steel and nine per cent nickel to ensure cold temperature performance. Designed using ExxonMobil’s patented modular technology, the LNG storage tankers were constructed in South Korea at one of the biggest shipyards in the world. Due to the sheer weight and size of the tanks, each one was designed in three modular parts before they were shipped to the Campamento construction site. Through the utilisation of custom-designed systems, the tanks were installed in the GBS before they were 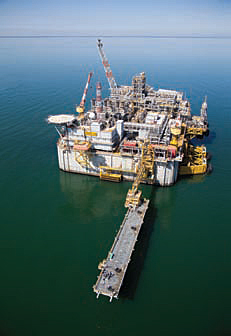 connected to each other as well as the regasification plant through innovative welding techniques.

Located on top of the GBS is the terminal’s regasification plant, which consists of four LNG open-rack vaporizers that operate via the natural heat of sea water, two cryogenic compressors, an energy recovery LNG vaporizer that reuses heat from the gas turbines, four pumps that are used to lift the LNG from the tanks, and five send-out pumps that send the gas through the vaporizers and into the external pipeline. In addition, the plant has a range of auxiliary facilities; these include gas turbine-powered electricity generators and the terminal’s electrical control centre.

Meanwhile, the terminal’s berthing and unloading facilities includes the ‘mooring dolphins’; constructed in the Arsenale shipyard, Venice, the structures weigh 9000 tonnes each and have been designed to accommodate a wide range of different sized LNG carriers safely. Once constructed, the two structures were towed from Venice to the Adriatic Sea before they were placed on the sea floor on east and west ends of the GBS and connected to the terminal via steel walkways. Moreover, the terminal has installed specially designed loading arms for offloading carriers; these transfer the LNG from the vessel to the pipes, which then carry the LNG onto the terminal storage.

To ensure safe and efficient operations, the operating and maintenance personnel on the Adriatic LNG terminal are on hand 24/7 and thus require comfortable living quarters. To meet this requirement, the specially designed personnel module can house up to 60 members of staff and contains living and sleeping quarters, as well as the terminal’s state-of-the-art control room. It is here that operators can use highly advanced technologies such as control communication, video cameras and radar systems to monitor all areas of the terminal’s operating cycle in its entirety. Moreover, the terminal crew’s living quarters includes a fully staffed kitchen, a laundry, heliport and medicinal facilities. There are also a number of communal areas for personnel to relax.