Back to Profile Gallery > Advanced Actuators

An eye on the market

In 2005 the business moved to a purpose-built factory outside the town of Skipton, and since that time has focused its efforts on manufacturing a range of electro-hydraulic actuators used primarily for valve controls in the oil and gas, water and power generation markets. 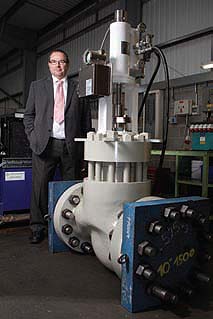 As Chris Woodhead, managing director explained, its products come in a number of guises from linear modulating units to quarter turn actuators for ball and butterfly control. “With our specialist team of design engineers we also get involved with unusual applications, for instance radio controlling a Chieftain tank for the British Army,” he added. “Hydraulic actuators lend themselves to applications of high thrust or torque requirements, fast speeds or a high degree of positional accuracy, and we address all these with our actuator range.”

The company was last featured in European Oil & Gas Magazine during March 2011, and since that time it has seen several significant developments. Said Chris: “One example of this was the need to establish a general manager for the Middle East, as this is a huge market for valves and actuators, primarily to be used in the oil and gas sector.

“We had tried breaking in to this market at ‘arms length’ by visiting from the UK every four months but this proved to be unsatisfactory, as even though we were seeing great interest in the product we were not offering support for what is a niche market, where the workings of these products is not well understood. Having studied how our customers cover the region and canvassed their thoughts, it became imperative that we had a general manager based out there, and as a result we appointed Alistair Carson as our Middle East general manager.”

He added: “There are a number of large projects under review in the Middle East at present that we would like to be involved with, and also one of Alistair’s key tasks is strongly pursuing end user approval. Middle Eastern clients require that you have end user approval to do business with them, so this is at the top of the agenda.”

As well as the Middle East, Advanced Actuators is currently involved in new projects in Brazil, and the projects in both countries are on oil or gas field developments, both on and offshore. “In the majority of cases the applications are on choke valves,” said Chris. “The actuator types being built for these projects are our linear modulating control version and our stepping type actuator. We have also expanded into the Indian and Far East sectors, and our end users include blue-chip names such as Koso, Cameron, Weir, ADMA, Petronas, Petrobras and Statoil.”

Alongside the expansion that Chris highlighted in the Middle East, Advanced Actuators is also growing in the UK, currently being in the process of enlarging the factory by a further 350 sqm. Such has been its success over the past three years that in 2014 Chancellor George Osborne heralded this factory as an example of the national recovery in manufacturing following a visit. “The Chancellor was ‘hugely impressed’ with the business and our investment in apprentices and the future generations of engineers,” stated Chris. “He was shown the depth of innovation taking place within the company, from actuators that have an output torque of over 1.2 million Newton meters to linear actuators that develop 2500kg of thrust from a total power consumption of 50 watts.”

He continued: “In September 2014 we also showed our commitment to developing the future of hydraulic engineering by partnering with the University of Bradford on a Knowledge Transfer Partnership (KTP) to employ a graduate on a two year, part-funded government project.” KTP is a national programme supporting UK businesses to innovate and grow by partnering with UK universities and colleges to gain access to the technology, expertise and skills available. “As part of this Evangelia Tsasliagkou has been hired as a mechatronics development engineer to work on the design and prototyping of power generators for remote valve actuation,” Chris added. 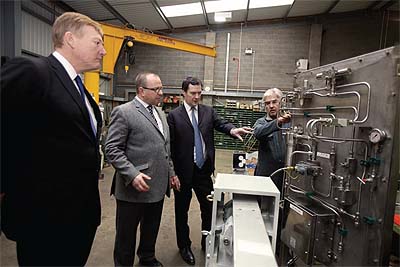 This project perfectly illustrates Advanced Actuators’ dedication to the development of staff, and to ensuring that as the business grows it can continue to find skilled and valuable employees. “Even though we are not a large company, we have a policy of encouraging young people to look at engineering as a career. Without more students becoming part of engineering, our manufacturing base will go into further decline, and so we are doing what we can to avert this,” Chris stated.

Thanks to its growing order books and new projects in the Middle East, Advanced Actuators is set to achieve 40 per cent growth in 2015. Chris highlighted what he believes are the key strengths of the company: “Innovation and standardisation are the two key words I would use. We have taken a product that normally sold in quantities of four to ten and standardised it such that we can bulk purchase and compete for quantities of 100 plus. Furthermore, we are constantly looking to see how we can improve what we do whether by design of the product or how we assemble and test the units.”

As we enter 2015 and oil prices continue to decline, Chris and his team at Advanced Actuators are keeping their eye on the market, to ensure that they can meet the future needs of clients. “Even with the oil price heading down on what seems to be a never ending spiral and a number of major players trimming budgets for 2015, from where we stand and for what we want and can offer, the market is still strong,” Chris confirmed, adding: “Even though politics is denying or preventing business with countries such as Russia or Iran at the moment, at some stage these policies will change. Both these locations have huge oil and gas reserves, as well as Russia being a major player in coal mining. So for the longer term we must be prepared to be ready to enter into these markets as well.”