One of Norway’s leading contracting and industrial groups, the AF Group is a turnkey supplier of services across a number of major industries.

The company is divided into five key business areas: property development, building services, civil engineering, energy optimisation, and environmental activities including demolition and recycling. Founded in 1985, today the AF Group employs over 2000 people across its sites in Norway, Sweden, Poland and China, and in 2009 achieved a total turnover of 5.4 billion NOK.

With over 20 years experience working in the construction industry, the AF Group approaches each project, from the smallest to the most demanding, with a high level of expertise and competence. The Group has developed core competencies within the oil and gas, power, transportation and harbour industries and undertakes projects for both state and municipal organisations. Another key business area for the AF Group is the property market, where it acquires, develops and sells both residential and commercial buildings. In connection with this the Group carries out all types of building work for private and public clients, including rehabilitation work in private residential and commercial buildings. Within this market the AF Group has a strong position in Oslo and the central southern part of Norway, as well as Gothenburg and southern Sweden.

The energy and environmental sectors are the newest markets that the Group has moved into in response to the global focus on these issues. Activities within this sector includes the demolition and environmental clean up of both onshore and offshore installations. AF Decom has operated as the Group’s demolition and environmental clean-up division since 2002 and is one of the leading companies in this area. The company is split into two units – one focused on onshore and the other on offshore activities. Services include removal, demolition, environmental reconstruction and recycling of buildings, industrial plants and offshore installation. In fact, the company’s dedication to the environment is such that it has achieved 98 per cent recycling rate, and furthermore, it is licensed for asbestos work in the UK.

AF Decom Offshore’s ability to manage and implement large projects whilst maintaining high standards has led to the company becoming a leading turnkey supplier within the offshore industry. The company works with many of the major oil operators offering a complete package within the offshore recycling market. With many years of demolition experience from land-based operations, AF Decom Offshore has drawn on this when developing practical solutions to offshore projects. In co-operation with ConocoPhillips, Marathon and other oil-companies, AF Decom Offshore has developed the ‘small piece’ methodology for deconstructing platforms using excavation machines and robots equipped with dismantling tools. These structures are then transported to land to be recycled at AF Decom Offshore’s facility – the AF Environmental Base Vats. The Vats decommissioning yard is Europe’s most modern disposal site for the dismantling and subsequent recycling of disused offshore installations, with new purpose built machinery and equipment. Previously the site was used in the 1970s and 1980s as part of the construction programme for installations located at Statfjord, Gullfaks and Troll, and is specifically designed for the removal of hazardous materials, electrical products and non-metals as the first stage in the dismantling process. 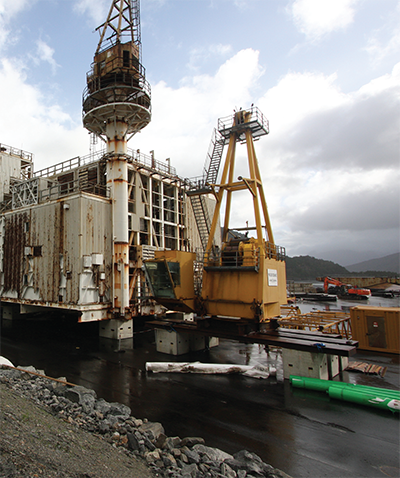 Since AF Decom Offshore acquired the site in 2005 it has invested significantly in the facilities and machinery including the replacement of loose gravel with a fixed asphalt cover, modern spill water collection points which collect any hazardous materials and new noise isolation methods. In 2006 a new water treatment plant incorporating both chemical precipitation and filtration went into operation producing emissions, which are well below the requirements of the Norwegian Pollution Control Authority (SFT) and the County Environmental Affairs. One of major developments has been of the Vat’s quays, which have been extended to accommodate projects involving every type of vessel currently operating within the North Sea. Following the completion of these works last year, the Vats site is fully compliant with all quality and safety standards required within the industry. Prior to carrying out any demolition project AF Decom Offshore conducts a thorough planning and design process, including risk assessment of all work packages, in close co-operation with the client.

The company has worked as the main contractor on a number of high profile offshore deconstruction projects including the decommissioning of the Kittiwake loading buoy for Venture, which was completed last year. Sub-contractors released the buoy from its anchor fixings in the Kittiwake field in the North Sea, before it was towed to the Vats facility. The buoy was then lifted ashore in three pieces, three weighing 800 tonnes and one just under 2500 tonnes. These sections were cut down into smaller pieces, sorted into various fractions and then sent to approved environmental facilities.

Another major contract was with ConocoPhillips for the demolition of the Ekofisk 2/4 Tank in 2004, which was AF Decom Offshore’s first offshore project, completed in 2007. Using the small piece method, the Ekofisk tank was deconstructed and cut into pieces by shears and sorting equipment mounted on excavation machines. The pieces were then loaded in specially built containers to be transported to land via supply vessels to be processed, recycled and delivered to appropriate facilities at the Vats facility. The project was completed successfully with excellent health and safety results and a total recycling of 98 per cent of the installation.

Currently AF Decom Offshore is working on a project for Shell UK, undertaking preparatory work for the decommissioning of six platforms in the Inde field of the North Sea. 3000 tonnes of steel and other waste is to be removed using the small piece technique and then shipped to Great Yarmouth on the east coast of the UK. The preparatory works includes welding on lifting arrangement, performance of non-destructive testing (NDT) and small piece removal of modules on top of the main support frames of the Inde Juliet JD and Kilo. The topsides and jackets will be offloaded at Vats for deconstruction and recycling, with a total recycling figure of approximately 10,000 tonnes of steel and equipment from the six structures. Work began in 2008 and is expected to be complete by the end of 2011.

As the number one company in the North Sea market for the deconstruction and recycling of offshore installations, AF Decom Offshore is keen to expand upon this position, and is looking at moving into newer markets outside of the North Sea. The company’s wide range of machinery and industry knowledge means it is able to tackle the challenges of the offshore deconstruction industry and provide project-tailored solutions. As demand for AF Decom Offshore’s services grows, the location of its Vats facility has the potential for further expansion. There are approximately 420 offshore structures, which it has been proposed will need to be removed from the North Sea over the next 20 years. With such an established reputation and track record of successful projects AF Decom Offshore is in a strong position to respond to this demand.