Africa Oil Corp (AOC) is a Canadian listed international oil and gas exploration company with a relatively small staff of fewer than 50 employees.

Some of these however boast as many as 30 years experience within the industry. The company can trace it roots back to 1983, when it was founded as Canmex Minerals Corporation (CMC) before moving into oil exploration and changing its name to Africa Oil Corp in 2009. AOC maintains a targeted focus on its prospects in East Africa and today holds assets in Kenya and Ethiopia. In addition it has a 45 per cent interest in Horn Petroleum Corporation (HPC), which operates two blocks in the Puntland Regional State, Somalia. Africa Oil has gained an increasingly respected reputation that is built upon a proven track record of oil field exploration and targeted investment.

Since AOC was last featured in European Oil and Gas Magazine in May 2013, the company has continued its aggressive exploration and drilling campaign in the South Lokichar Basin in Northern Kenya. This is in parallel to an additional exploration programme designed to open up new Tertiary and Cretaceous basins within Kenya and Ethiopia. During September 2013, AOC announced an increase of 557 per cent in estimates of contingent resources in the South Lokichar Basin and Ethiopia, as well as a significant increase in risked prospective resources. These estimates were based on independent assessments made by Gaffney, Cline & Associates (GCA) and were conducted in accordance with Canadian Securities Administrations in National Instrument 51-101 standards for disclosure for oil and gas activities. It should be noted that these estimates do not include the company’s 45 per cent-owned subsidiary HPC or its assets.

The announcement was followed by continued exploration and drilling with operating partner the level of confirmed contingent resources in the basin. Following the latest results Tullow updated its estimate of discovered resources in this basin to over 600 million barrels of oil. Tullow believes that the overall potential for the basin, which will be fully assessed over the next two years through a significant programme of exploration and appraisal wells, is in excess of one billion barrels of oil. Presently AOC has seven rigs drilling with its operating partners, four in the Lokichar Basin (operated by Tullow), while a further three rigs are preparing to drill basin opening wells in as yet unproven basins. The increased pace of the company’s exploration programme has resulted in a 2014 exploration budget in the range of $300 to $350 million net to AOC. This represents a significant budget increase in comparison to the 2013 budget, estimated at $200 million. 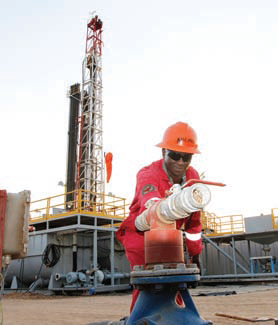 During January 2014 AOC announced the discovery of two new oil fields in Block 10BB, resulting from exploration drilling in the Amosing-1 and Ewoi-1 wells. These discoveries continue the 100 per cent track record of success in the Lokichar Basin with seven discoveries out of seven exploration wells. Commenting on the news, president and CEO of AOC Keith Hill said: “The continued success of our exploration programme in northern Kenya will allow us to drive forward development plans with greater certainty. Given that we have had a 100 per cent success rate on exploration prospects in the basin, we expect to see more growth in resources and more discoveries as our aggressive drilling programme unfolds in 2014. In addition, the several new analogous basin opening wells being drilled during this period have the potential to bring a steep change in company valuation upon success.”

As well as underscoring the company’s tremendous track record in oil field exploration, these latest discoveries also have the potential to realise a high yield of future return. The Amosing discovery in particular looks to be very exciting for AOC, as Keith elaborates: “The Amosing discovery looks like it is going to be one of the company’s best, with very good quality reservoir. It is very close to the Ngamia discovery, which is still the largest discovery AOC has had with over 200 meters of net pay. Amosing is only seven km away from that and looks to have very similar reservoir properties. The Ewoi discovery is on the other side of the basin in the lower Lokhone reservoirs. These tend to not be as good quality, but the structures are quite large. The structures on the east side are roughly three times the size of the structures on the western side. We still consider these discoveries to have high potential, even though they may have slightly lower flow rates and the oil may be slightly harder to get out, as the volumes potential is quite high.”

AOC has built a solid foundation upon which it will base its future operations into 2014 and beyond. Key to this is a spirit of close co-operation with local communities and government officials to develop relationships that benefit all concerned. AOC works hard to ensure that the challenges that accompany operating in remote regions are mitigated and that local communities are treated as partners rather than competitors.

Keith explains the reason for this approach: “It’s all about community relations and gaining the social license to operate. I have been working in Africa since 1989, within the Sudan, Somalia and other countries without incident. This is because we always approach the local communities first. When we enter a new area, I always tell my team to act as though they are entering the communities’ home and to act the way you would expect them to act in your own home. The building of these relationships does not always come easy; trust doesn’t come over night, it has to be earned over time. It’s about engaging the communities; telling them what you are planning to do and discussing how we can best benefit them. But most of all it is about keeping promises. If you say that you are going to do something, you had better do it. Once you do this a number of times, that’s how relationships are built and trust earned.

“However we cannot do this alone. We work with host and foreign governments, domestic and international NGO’s as well as international organisations like the World Bank and African Development Bank, to make sure this is a positive experience for as many groups of people as possible. It is our belief that the discovery and development of natural resources can and should be a blessing and not a curse.”