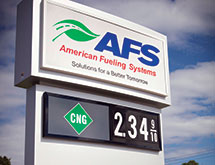 Rahim Charania’s family, like many others, saw its fortunes change following the onset of the Great Recession in 2008. The family had owned a portfolio of commercial real estate and hospitality properties for the preceding three decades, but it started taking a critical look at its holdings after the economy shifted. “We were forced to look at our asset portfolio and ask ourselves what we should fight for or just walk away from,” he says.

During this analysis, the family noted a severe drop in income from most of its retail and office holdings except for one: gas stations. “We wanted to know why more people were filling up then than ever before, in the worst financial crisis in decades,” he says. “What I learned is that fleet operators that had stations on their own properties were not being extended credit from their suppliers, so they were filling up with us instead.”

Many of these operators also added that along with labor, fuel was the highest cost for many of these customers. Many business owners inquired about the feasibility of using compressed natural gas (CNG) for their operations, which spurred Charania to action. For Charania, this meant investigating CNG as well as liquefied natural gas (LNG) as potential business options.

“I believe all great businesses and all great ideas start with simple conversations,” he says.

Industry Needs
Charania founded American Fueling Systems (AFS) in 2010 to meet the growing demand for alternative fuels. “Not too many people at the time were really incentivized to start new businesses, but we saw opportunities in the marketplace from operators who were using diesel and looking for ways to stabilize their costs and meet new EPA standards,” he says. “We took advantage of that opportunity, and have seen strong growth ever since.”

The company in 2012 received a grant from the U.S. Department of Energy to build a CNG facility in Atlanta that is the largest of its kind in the state of Georgia. AFS expects to open CNG fueling sites in Houston; Columbus, Ohio, Virginia City, Virginia; and three other cities this year that will join five existing fueling stations.

The company’s services include operating fueling stations for fleets as well as providing LNG for portable power generators operated by oil and gas exploration and production companies. Traditionally, these companies would use diesel fuel to operate generators that power fracking and other exploration activities in remote areas. “We believe there is a tremendous opportunity for these organizations to eliminate the volatility of fuel pricing,” Charania adds. “What we provide is a way for people to transition from diesel to natural gas in as seamless a manner as possible.”

In addition to offering savings to oil and gas producers that consume diesel fuel, AFS also offers savings to customers who are paying fees of roughly $900,000 a year to consume natural gas from pipelines in an uninterruptable manner. “Some of our customers have been able to change their allocation from uninterruptable to interruptible by having a backup LNG cryogenic natural gas storage tank on their site,” he says.

AFS’s equipment fleet includes LNG cryogenic storage tanks and transport trailers. The company will double the size of this fleet this summer, making it one of the largest of its kind in the country. “The basis for our success is our ability to develop sustainable solutions for our customers by understanding their unique needs,” Charania says.

A Tool for Change
Oil and gas and industrial sector customers tend to look to LNG for their needs because LNG storage units have a significantly higher capacity than their CNG counterparts. “We believe that CNG is the product to use to replace diesel fuel in transportation, and LNG is for high-volume users, primarily in power generation of small-scale industrial,” Charania explains. “Our LNG units can store 13,500 gallons vs. 3,000 for CNG.”

The ease of use of CNG as a fuel makes it a popular choice for major corporate fleets including Waste Management and Frito-Lay. “Whether it’s CNG for transportation or LNG for powering production, natural gas in a viable, profitable and environmentally sound solution for your organization that will not only help the metrics by which you evaluate your business, but will also play a big part in helping wean off our dependence on foreign oil and building a solution the rest of the world can adopt,” he adds. “However, the real action needs to be taken by people in the energy and mining industry – we are a tool, but the industry is the true catalyst for that change.”