Back to Profile Gallery > Andersens Mekaniske Verksted AS

With a company history dating back to 1860, Andersens Mekaniske Verksted (AMV), as it exists today specialises in tunnelling machinery, mining equipment and components for offshore oil and gas production, areas of expertise it has possessed for more than 40 years. Privately owned and based in Flekkefjord, Norway, AMV is in its fifth generation of family ownership and employs a team of approximately 110 people.

At its disposal is a large outside area and modern buildings with a total floor area of some 9000 square metres comprising offices, painting and sandblasting facilities and shops dedicated to machining, welding, fabrication, assemblies and electrical work. All of these units are fully equipped with state-of-the-art tools that allow the company to meet the stringent quality and reliability demands set out by the oil and gas industry. Certified through ISO 9001 and 14001 standards, AMV also possesses a large outdoor area where it carries out thorough tests in drilling rigs and other tunnelling and mining applications.

Benefiting from being a very independent company, AMV differs from most other subsuppliers by maintaining its own product lines, which are all manufactured in-house, and employing its own engineering staff. Very much an international company, nearly half of AMV’s annual turnover comes from exports to countries in South America, Europe and Asia. This ability to 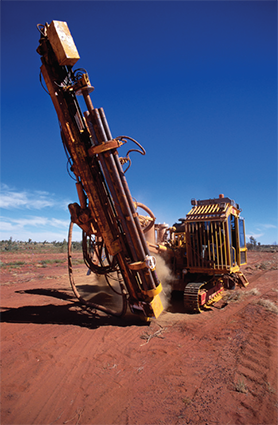 serve a global market has come as a result of the company’s flexibility as an organisation and the professional approach taken by its skilled personnel. A mark of this approach is the fact that the business was recognised as one of the top ten suppliers to Aker Solutions in 2009.

AMV has played an important role in supplying advanced equipment to companies operating in the North Sea ever since the region’s abundance of retrievable oil deposits were first discovered. The deliveries made by AMV have mainly come in the form of subcontracts for other major suppliers, however, meeting the strict demand for quality has always been a priority of the company, and its ability to satisfy its customers has led to a number of positive spin-offs of its other products. Much of this quality comes through AMV’s close cooperation with its suppliers and distributors, such as HYCO AS, a Norwegian supplier of hydraulic components.

A unique asset the company has is its 100 per cent owned subsidiary company, AMV Offshore. Focused on delivery to, and developments within, the oil and gas industry, AMV Offshore has been responsible for the creation of several unique products, for instance the UniTong, a product now owned and utilised by Weatherford Rig Systems. Another development that commenced production in 2010 was the manufacturing of a new mud pump for the company Optipump. This project led to the signing of an industrial alliance between the company and AMV Offshore, one both groups saw as being an important, positive and strategic agreement, something AMV and its subsidiary have gone on to emulate with a long list of other companies over the years. AMV has also now acquired 20 per cent of Optipump in order to create an even stronger industrial alliance and also pushing development of the mudpump. More recently the business is also working on supplying three different cranes (cherry picker, manipulator crane and handling crane) to an offshore project called YME, where Talisman is the end customer and Rolls Royce is AMV’s customer.

In order to maintain its leading position as a major name in the development and manufacture of state-of-the-art equipment for both onshore and offshore equipment, AMV continually engages in research and development projects, some of which are conducted as part of joint ventures with active partners.

As the demand for tunnelling and drilling services increases around the world there are many future opportunities for AMV to grow as a business. Thanks to the combined strength of its products and the relationships the company has with other figures in the industry, AMV managed to withstand the downturn of 2009 and retain the values that have kept it on the map for over 150 years. With confidence now thriving in the current market, AMV stands in good stead to dramatically increase its oil and gas market turnover.