The future is bright

ATPC owns one of the largest dedicated bitumen processing plants in Europe with a capacity of 3300 tonnes per day, and operates an independent commercial tank storage facility of approximately 720,000 cubic metres at completion of ongoing projects.

The history of the site dates back to 1933, when the first oil activities were started by one Boris Melamid, since then, the site has been owned by many different refining companies. This all changed in January 2010 when ATPC was acquired by VTTI, re-directing operations from refining to a more commercial storage provider.

Being linked to VTTI, which operates an extensive independent terminal network around the globe with a current capacity of over six million cubic metres, the company is constantly exposed to quality business practices and this is what it draws upon when setting its own benchmark for best practices. Conducting business in a manner that is safe, environmentally sound and commercially beneficial for its customers, VTTI seeks to give its clients the best possible competitive advantage whilst complying with all the necessary industry legislation.

Gert Quint heading the company say’s that the process of kick-starting a rebirth of an old asset began in rapid order with the completion of retrofitting 17 tanks, a task that needed to be completed within twelve months to meet the site’s licensing requirements. Despite the monumental nature of the job it stands to reason that the company received a great deal of praise from the regulatory authorities for completing the work in fine style, in turn creating a strong relationship based on trust for the future plans of ATPC. 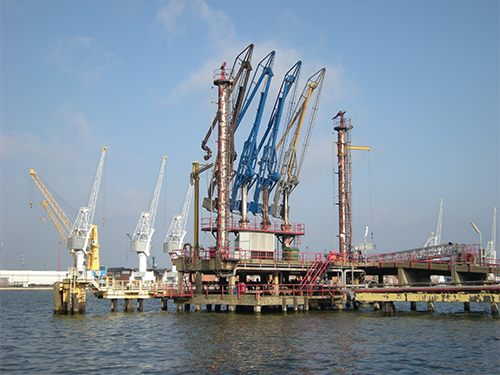 Another particularly challenging development the company needed to initiate in a short space of time was the connecting of ATPC’s infrastructure to the NATO aviation fuel pipeline. This was a particularly time-critical project as the pipeline could only legally be switched off to all users for 72 hours, presenting a very small window of opportunity to carry out the work successfully. Once again ATPC rose to the challenge, also building confidence for VTTI to progress with the engineering design phase of a planned ‘RotAn’ pipeline project, connecting its Rotterdam and Antwerp terminals. Upon completion this project will offer a superior alternative to barges, subject to receiving environmental permits from the Belgian government. The first phase of the ‘RotAn’ pipeline project will head north from ATPC, connecting to various major terminals in Antwerp en route before reaching a major
chemical plant in the Port of Antwerp.

The projects ATPC played a role in during 2010 were just one part of a grand scheme to upgrade the terminal supporting the launch of Vitol Aviation and meet the challenges that come with supplying one of the world’s most high-spec fuel products say’s Jasper Schmeetz, customer service. In order to meet the technical requirements, as set out by the Joint Inspection Group, ATPC continue to incorporate fully discrete import and export lines, refurbished tanks with internal floating roofs with vapour-retaining aluminium domes and class-leading fire safety systems. At present structures and applications in and around the site are being demolished, renewed or replaced to allow the terminal to begin offering the level of service desired by customers in today’s oil and gas market.

Moving forward, a major investment programme of over 80 million euros will help spearhead the company and fund further tankage and inter-connection works. This will include extensive waterfront improvements, optimising the company’s bitumen operation and doubling ATPC’s storage capacity.

With initial project works estimated to be completed by the second half of 2012, the company also plans to leverage the momentum it has already generated to add an extra 500,000 cubic metres of storage capacity that is currentlyon the drawing b oard. With the full support of VTTI, ATPC remains on course to usher in a new era that will make it a major player in the European oil and gas industry.