Back to Profile Gallery > APM sh.p.k

Established in January 2012, APM sh.p.k has just completed its first year of business.

The company is part of a much longer heritage though having been formed during the restructure of the AlbStar Group. AlbStar is one of the largest companies in Albania working in the field of engineering services across numerous industries.

As an integral part of this Group, APM sh.p.k has inherited rich experience in the construction industry. At the same time as the formation of APM sh.p.k, two other sister subsidiary companies were created, all of which now sit under the AlbStar Holding parent company. Whilst APM comprises the steel side of the business, ASAB is home to AlbStar’s asphalt and concrete production, and VibTIS incorporates trade investment services.

Elaborating on this structure, CEO and technical director of APM sh.p.k Altin Fuga says: “The division of the industrial department from AlbStar and creation of APM was a long-term vision of AlbStar’s management. This gives us the opportunity to be even more focused on this market and at the same time be more flexible to our customers. We also collaborate together with the other companies if a project requires it, particularly VibTIS which acts as an outsource for collecting offers and purchasing main parts.”

As the industrial arm of AlbStar much of APM sh.p.k’s work includes construction of infrastructure such as hydrocarbon storage plants, pressurised and un-pressurised oil gas and water pipelines, heat exchange plants, industrial boilers, and other devices. The advanced technology utilised by the company means that one of its greatest strengths is its specialist staff and dedicated engineers. Likewise, APM sh.p.k has been able to take onboard the experience of AlbStar in managing the company, how to treat clients, and to provide the best quality services at the lowest possible cost. 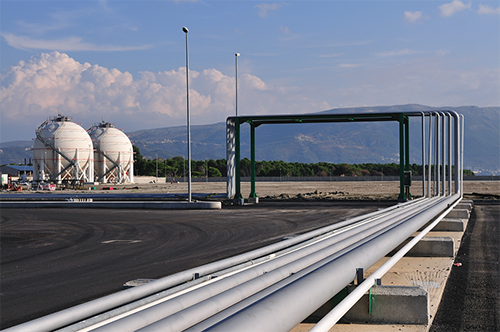 In its first year of independent business APM sh.p.k has been very successful in gaining work through its local market, such as the Patos Marinza oil field development. “Throughout the year we built numerous small pipelines for the transport of crude oil and gas from the wells to a gathering system. Following this we built height pressure pumps and plants for the injection of water, as well as crude oil tanks. Marinza is not the only area we have been working in though, we have also constructed oil tanks and performed various services for the drilling rig at Shpiragu 2 for the Petromanas Company. Furthermore, we provided services to the ARMO refinery in the refurbishment of a 11,000 cubic metre storage tank,” enthuses Altin.

“Up until now we have built tanks up to 11,000 cubic metre capacity in line with customer requirements, but we are not limited in terms of constructing larger units. We also continue to apply automation technology to the welding of tanks, which helps us to be more competitive in this market. In terms of pipeline construction, I believe that we have marked ourselves as one of the best companies at the moment in our country having completed pipelines at Petrolifera Vlore, and for Taçi Oil at PortoRomano, amongst others,” he continues.

As a relatively young company in its market APM sh.p.k is keenly looking to the future in order to further establish its reputation. In 2013 alone the company has plans to invest in a new workshop of more than 15,000 square metres, which will be especially dedicated to the production of structural steel and bridge girders. This will not only present APM sh.p.k with greater opportunities in the oil and gas industry for tanks, piping, and structural steel for refineries, but also enable it to support AlbStar on civil projects for steel bridges and buildings.

“As AlbStar, the Group has experienced an impressive growth over the past five years,” notes Altin. “The creation of AlbStar Holdings in 2012 was specifically designed to increase the quality of management, and to increase turnover. As APM sh.p.k, over the next five years we hope to not only be seen as a leader in local service provision to the oil and gas industry, but also as a real competitor on the European market. We believe in our people, our plans, and as such, that both old and new customers will entrust their projects to us. We also hope that the Trans Adriatic Pipeline (TAP), which will cross Albania, will be a great opportunity for us as a country, and APM as a company, to show our capability in the delivery of mega projects,” concludes Altin.