Back to Profile Gallery > Applied LNG 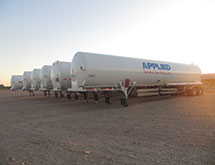 The nation’s second-largest producer and marketer of liquefied natural gas (LNG) is increasing its footprint even further. Westlake Village, Calif.-based Applied LNG in June completed work on its second production train/liquefier in Topock, Ariz. The new liquefier, located adjacent to an existing production facility, has a production capacity of 86,000 gallons a day, doubling the company’s total capacity to 172,000 gallons. The facility allows the company to reach customers in Arizona, California, Utah, northern Mexico and portions of Nevada.

“We ran out of capacity on our first production train because of the growth of our market in the southwest region,” says Shaunt Hartounian, the company’s vice president of business development and strategic relations. “We’re seeing organic growth of the existing customers in our portfolio plus new customers who are just now adopting an alternative fuel strategy.”

The company in early 2014 announced its purchase of 31 acres of land in Midlothian, Texas, located 35 miles south of Dallas. The site is large enough to house five liquefiers, each with a capacity of 86,000 LNG gallons per day, as well as storage for up to 1.5 million gallons of LNG. The first liquefier broke ground in June 2014 and is anticipated to open in mid-2015. The Texas plant is only one of a few midscale LNG plants announced nationwide within the past six years, Hartounian notes.

The Midlothian site will allow the company to expand its service area to include customers in Texas, Louisiana, Arkansas, Oklahoma and New Mexico. The company anticipates building to its capacity of five liquefiers as demand for LNG increases in the region, Hartounian adds.

Meeting Demand
Applied LNG is also making an increased investment in its equipment fleet, which it uses to distribute fuel to customers. The company operates 34 LNG trailers and 10 mobile fueling units from a distribution and logistics hub in Fontana, Calif.

The company in November anticipates taking delivery of 15 new trailers manufactured by Alloy Custom Products, which produced 10 of Applied LNG’s existing trailers. “Alloy’s trailers performed very well for us over the years,” says Vice President of Operations Frank Martelli. The new trailers will allow the company to transport the additional LNG it is producing in Arizona as well as its future plant in Texas.

The company attributes much of the initial demand for LNG in the California, Arizona and surrounding markets to the enactment of state and local clean air laws that mandate a reduction in vehicle emissions. “The recent growth in demand, however, is predicated on the significant cost advantage LNG has over diesel or gasoline,” President and CEO Cem Hacioglu says.

In addition to processing and distributing fuel, Applied LNG also offers turnkey facility solutions to customers. “To use an analogy, we want to sell the razorblade – fuel – to customers, but to do that, we often need to sell the razor, which is the fueling station or other infrastructure needed for that fuel,” Hartounian says. “We have the ability, both internally and through our strategic partners, to design, build and operate fueling stations in the verticals we service on behalf of our customers.”

Competitive Advantages
Applied LNG’s ability to produce and distribute fuel at the lowest fuel cost in the market, as well as its ability to work with customers on consulting and facility needs, is among its greatest assets. “We are truly a full- service operator,” Hartounian says. “Our ability to site and build plants and develop the market around those plants is our core strength.”

The company’s approach to financial management is also an advantage. “We run a cost-effective organization, and our overhead expenses are much smaller than those of our competitors,” Hacioglu says. “We hire the right people with the right personal and professional attributes, and get more from each individual here than most of our competitors can.”

A New Beginning
Applied LNG formally changed its name in June from Applied Natural Gas Fuels, Inc., which the company was founded as in 1995. The new name better reflects the company’s strategic focus.

“Whether in liquid form or as a feedstock for other natural gas applications such as CNG, production, distribution and marketing of LNG has historically been the focal point of our company,” Hacioglu says. “As we increase our LNG production capabilities and expand our distribution footprint throughout the United States, we wanted our name to better reflect our business model and express our belief in the important role LNG will play in meeting America’s future energy needs.”

The company’s future plans include fully developing the Topack processing platform and potentially opening additional facilities. “Our vision is to expand our production and marketing footprint as much as possible,” Hacioglu adds. “In the next three to five years we expect that we will look and feel the same in terms of what we do, but at a much larger scale.”