Back to Profile Gallery > Apply Leirvik AS

A high quality of living

For 28 years, between the company’s establishment in 1946 and 1974, Apply Leirvik spent its time making a name for itself in the field of shipbuilding.

It wasn’t until the mid 1970s that it took the radical decision to change its entire business strategy, setting itself on the road to becoming the leading supplier of living quarters modules for offshore platforms. By the 1980s the company had acquired a substantial level of know-how related to this field, as well as a reputation for having an uncompromising approach to the quality of its products.

Throughout the 1980s and the 1990s Apply Leirvik delivered several living quarters and utility modules including Saga Petroleum’s Snorre LQ. This was the largest aluminium structure ever built for the offshore industry, and Snorre became a pioneer project for the company. It has also been the basis for the company’s research and development programme on aluminium used in offshore modules ever since.

Today one of the leading EPC Contractors for major offshore modules, Apply Leirvik has arguably delivered more living quarters modules to customers within the North Sea than all of its competitors put together. Its considerable experience in engineering and aluminium and steel construction has helped it build up a comprehensive list of references for offshore modules. With 275 employees stationed in Stord, Norway, the company is immensely proud to say that all of its undertakings since 1974 have been delivered on time and with its customers’ stamp of approval.

To best highlight the company’s industry reach one has to look at how the different segments of the business operate: “The oil and gas aspects of Apply Leirvik have historically been conducted in the North Sea, however it does have several daughter companies operating further afield,” states Lars Solberg, managing director of Apply Leirvik. “The biggest of these is Apply Emtunga, which is based in Sweden. Emtunga was once Apply’s biggest competitor, but was acquired three years ago after entering bankruptcy. This company as it exists today is 100 per cent international, delivering to regions including the Caspian Sea, Indonesia, Malaysia, the Gulf of Mexico, the UK and West Africa. In March 2011 the company continued to seize on the international growth of the oil and gas industry in fast developing markets with the acquisition of 50 per cent of a Singapore based company, Aluminium Offshore: “This company is universally known as the world’s leading provider of aluminium helicopter decks,” Lars continues. “The reasoning behind this business decision was not simply to become more heavily involved within the heli-deck business, it was also to acquire a greater understanding of local market conditions and access the local production line. This will allow Apply Leirvik to expertly link the selling of its living quarter modules to that of Aluminium Offshore’s helicopter deck business. A result of this has been the creation of a completely new Singapore based entity, Apply Leirvik International Pte Limited,” primarily targeted at delivering aluminium living quarter modules to the Asia and Australia market. 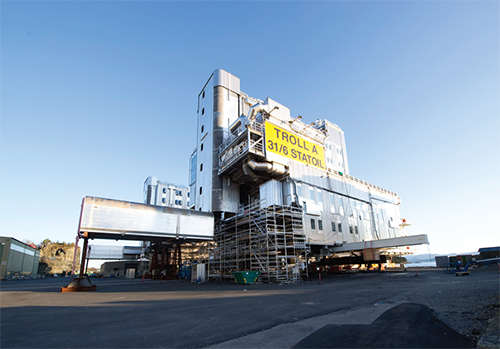 Lars himself has now been with the company for just over one year, yet it didn’t take long at all for him to quickly identify the core strengths and qualities of Apply Leirvik that have made the company so successful throughout its 65 year existence: “The real heart beat of the company is of course the level of competency it possesses within its area of expertise, something that comes from its employees, all of whom possess expert knowledge of the design and manufacture of these living quarters, and importantly, how to sell them. The hard work of these employees and the confident business decisions taken by the management has helped further Apply Leirvik’s ability to expand its procurement and project management capacities. This means it is now in an excellent position to capitalise on the booming oil and gas market in a way it could not have done in the past.”

This strong position can also be seen first hand in the projects the company is currently involved in. One of the most recent was the award of an EPC contract from Statoil for the delivery of living quarters and a heli-deck to its new Gudrun Platform. The living quarters module has an area of 2000 square metres and houses 40 single cabins, an administration centre, central control room and all those other necessary facilities required to operate an offshore camp.

Constructed in aluminium, the Gudrun Platform’s living quarters and heli-deck is low weight, will boast minimum maintenance requirements and be more environmentally friendly than other structures made from different materials. Prefabrication of the aluminium needed occurred in March 2011, hook up of the living quarters module to the deck of the platform will take place at a yard operated by Aibel in Haugesund, Norway, and it is expected that the module will be delivered in July 2012. Further to this work the company has a couple of big living quarters and fabrication projects currently under construction in Sweden, as well as one living quarters module being assembled in Azerbaijan, which will eventually go into service on one of BP’s platforms.

Dedicated to constructing and bringing to life customised solutions that are made with the idea of providing the utmost level of safety at all times, Apply Leirvik’s project organisation has the necessary degree of experience to work in accordance with various specifications regarding comfort and price. Irrespective of the requirements regarding the lifetime of the installation or the climate it needs to operate in, customers of Apply Leirvik can always be assured in knowing that the technical solutions and level of comfort they desire will always be matched, if not exceeded.