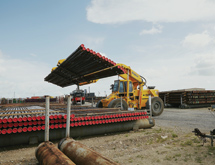 As an international oilfield support services business for more than a decade, ASCO in Trinidad has gone from strength to strength. The company has built on a long and successful track record in oilfield logistics to become a leader in oilfield services, offering a broad range of services allowing the operations of its clients in Trinidad and Tobago to run smoothly day in day out.

Headquartered in Port-of-Spain, ASCO is strategically located within Trinidad having a presence at the major port locations in the west (Chaguaramas), southeast (Galeota) and southwest (La Brea) areas of the country with a staff in excess of 100 with an extended workforce through key subcontracting arrangements. “Our partnerships are our key to our success,” Executive Director, Caribbean & South America Bruce Mackenzie says.

Regional Effort
Trinidad is considered to be a mature geological area that has been producing oil for more than 100 years. With the advent of the growth of the domestic LNG production capacity industry in 1990s, the country has since produced more gas than oil in energy equivalent terms.

Over the past decade, exploration was insufficient to fully replace the reserves that were produced. Recently, this trend has reversed, leading to an upswing in the industry activities targeted toward exploration. At the same time, the aging infrastructure requires operators to invest heavily to keep the offshore assets safe to operate.

“This has led to an increase in exploratory, appraisal, and, developmental drilling and facility improvement projects,” Mackenzie says. “Demand for logistics support has increased in line with the increase in activity.”

As of winter 2012, ASCO Trinidad started to see activity in the region emerge from a slow period that hadn’t seen much drilling. Over the last year, ASCO Trinidad has seen a reversal of that trend.

Major trends occurring within Trinidad’s oil and gas acreage include the emergence of better seismic information on existing known reservoirs and the start of a deep-water exploration phase in 2016. ASCO Trinidad believes supporting those projects will be critical to its long-term future in supporting the region’s energy needs.

In addition, the company sees ramped-up offshore exploration in the emerging Guianas region (French Guiana, Suriname and Guyana) over the next few years. Should commercially viable discoveries be made, it will mean long-term sustained oil and gas investments in the region that could herald a real platform for growth in energy services.

“If significant economic discoveries are made in the deep water, that would mean opportunities for our expertise to develop that of neighboring regions which have limited infrastructure and human resources ” Mackenzie says. “We are entering into a heightened activity cycle in exploration, and what is found will impact the next cycle of investment and production. In response to this emerging trend we have made investments in our organization’s management, facilities and equipment in La Brea and Chaguaramas. We strengthened our management team and invested in replacement of equipment with newer, safer, more productive plant and systems which manage information.”

This dovetails with what ASCO has been actively pursuing at the global level under it new owners Doughty Hanson and its new CEO Derek Smith. ASCO now operates in four key regions around the globe – Americas, Europe, Middle East and Africa, as well as Australasia. Each region now has its own senior management team and they are given full autonomy to develop their own key markets within that region.

Adding Value
ASCO has been at work growing the company’s depth and breadth in oilfield support services by way of its acquisitions, acquiring NSL Training Services (formerly North Sea Lifting) based in Aberdeen, Oniqua Software Services providing advanced inventory optimization capability based in Brisbane, Australia, and three logistics oilfield support service companies based in Alberta, Canada. The company recently commenced operations in Tanzania, is the operator of the large offshore supply base in Darwin, Australia, and continues to pick up new business in its core European operations market.

The company also began the process of updating its brand identity in September to reflect its leadership position in the industry and illustrate its increasing focus on its global reach and broadened range of logistics and supply chain services, as well as making more use of data and knowledge that exists within the industry.

Looking forward, ASCO Trinidad is committed to continuing its long-standing strategy of developing local people (it only has one expatriate employee in a staff of more than 100), supporting the communities in which it operates and providing an environment that puts safety of people as its most important value.

“Life is precious; I consider it our greatest achievement to avoid injury and loss in what is an inherently dangerous environment whilst delivering a service that supports the client’s overall strategy. That is a key value we bring to our clients,” Mackenzie concludes.