A yardstick for success

Since it began operations in September 1977 with a 500,000 tonne deadweight tonnage dry-dock and two accompanying jetties, the Arab Shipbuilding and Repair Yard Company (ASRY) has undergone numerous expansions.

From its very early days the company’s yard has aided various types and sizes of vessel with their repair needs, and this has only intensified over the years with the introduction of two floating docks in 1993 and the addition of two slipways in 2008.

Today a global leader in the repair and maintenance of all types of ships as well as offshore rigs and craft, ASRY provides a complete range of services from steel fabrication to pipe repairs and production, engineering and machining, instrumentation and blasting, through to painting. Further to its ability to perform ship repairs, ASRY also serves the offshore sector through its specialist division ASRY Offshore Services (AOS), which was formed in September 2008.

“Overall, 2011 was a successful year for ASRY, even in light of the ongoing financial uncertainty and restrictions that still exist in certain parts of the world,” states general manager of offshore services, Andy Shaw. “Having achieved its financial targets for the year, the decision of the company to establish its offshore division four years ago continues to prove to be a very wise move indeed. In the last 12 months alone, some 40 per cent of ASRY’s turnover can be attributed to this division, which is an increase from the figure of 25 per cent that was recorded in 2010.”

When looking closer at its offshore business, it is clear that this side of the company remains heavily influenced by the work of Saudi Aramco, with 85-to-90 per cent of its operations being linked to jack-ups that are operating under the Saudi Aramco banner. From a ship repair perspective, ASRY remains very much a global player, dealing with customers around the world.

Integral to both the aforementioned sides of ASRY’s business is its Bahrain based yard and surrounding facilities and infrastructure: “In keeping with the company’s history of expanding upon its capabilities it has recently completed an extensive expansion plan that is due to be completed in June 2012. This plan includes the construction of a new 1.4 kilometre quayside and a modern fabrication area,” Andy says. “Obviously any shipyard does not want to get into a position where it is dependent on one, single source of income, which is primarily why the company is investing so heavily to take itself forward. At present, commercial ship repairs, offshore repairs and naval work balances out the business, and by adding fabrication skills to its portfolio the company will be able to start looking at further project opportunities that it would previously have been unable to undertake.” 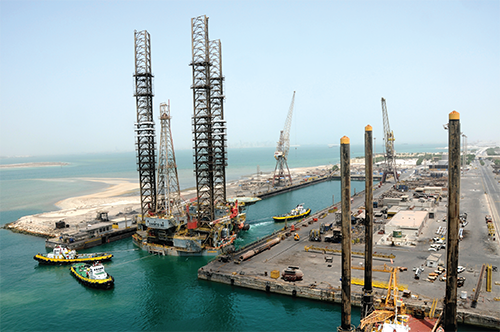 As oil and gas based business continues to blossom in the Middle East, more and more new yards are appearing, yet ironically it is the fact that it is anything but a young yard that gives ASRY Offshore Services one of its many key strengths: “As well as having the added benefit of retaining the knowledge and skills of a workforce that have been working in the industry for a number of years, the company can also draw upon the established processes and procedures that exist throughout its operations.”

These strengths were recognised once again in November 2011 when ASRY was officially named shipyard of the year at the Lloyds List Middle East and Indian Sub-Continent Awards in Dubai: “Any award, but in particular this one, is something that the company believes is given based on the quality of service that ASRY is providing on a continuous basis,” explains Andy. “ASRY’s number one focus is, and always has been, its customers and making sure it is able to meet their demands, always trying to take that extra step to ensure these same customers leave its yard happy and satisfied.

“The oil and gas industry, in some ways, is relatively straightforward, in that if a company is able to provide its customers with high quality services, it will inevitably be recognised for it. What this allows is the opportunity to build strong, long-term relationships with clients, providing also that the business remains competitive and maintains appropriately high quality and safety standards.”

Just one year prior to receiving this latest award the company was presented the 2010 Lloyd’s List Award for Corporate Social Responsibility: “From day one ASRY has always worked to make sure its people are well looked after, that they live in good accommodation and, most importantly, are recognised for the hard work they do on a day to day basis,” Andy enthuses. “It is that level of value that the company places in its own people that helps it to maintain its customer focus, because each employee understands that the hard work that they do is the key to the success of all parties involved.”

As ASRY Offshore Services looks to make 2012 an even more successful year than those previously, a large part of its attention turns to its efforts to expand on the type of services it can provide its customers: “Now that the yard’s new fabrication area is close to going online, what the company is striving to do is secure work in this field of expertise,” Andy says. “This will be a major focus over the next two-to-three year as it looks to penetrate this particular offshore market.

“Entering the fabrication sector is certainly what the company considers to be the next logical step in its expansion plans. When the offshore services division of ASRY was first launched the initial aim was to establish and build upon a solid reputation for being able to perform quality rig repair projects. Now blessed with a stable team in place, a proven ability to deliver an unrivalled level of service and a sizable facility, ASRY Offshore Services has the qualities necessary to take the next leap forward in its evolution.”

In addition to achieving internal expansion, ASRY has recently sets it sights on a new project with the establishment of ASRY Energy. A joint venture between ASRY and UK-based company Centrax, the two have come together to develop a multi-application power barge. Fitted with two Rolls-Royce – Trent engines, the barge is capable of generating 125 megawatts of power: “The fact of the matter is that a number of developing countries currently lack the necessary infrastructure to provide immediate power to companies working in certain areas,” Andy highlights. “What this barge can do is be transported to a specific location and the hooked up easily to that country’s power grid. Furthermore, this barge will be able to be sent to areas affected by natural disasters to provide vital, emergency power supplies.”

With approximately 37 jack-up repair projects completed in the last three years, there can be no arguing that ASRY Offshore Services has established itself as a major player in its field. While this provides the company with a strong platform from which it can continue to venture into new areas of expertise, Andy concludes that ASRY Offshore Services’ core priorities have not changed significantly since it first came to prominence 35 years ago: “Clearly the company needs to ensure it remains aware of what developments and events are taking place around it, and remain able to react to these accordingly. However, the most important thing is for the company to be seen as the very best rig repairer and repair yard operator in the Middle East.

“Moving into the fabrication sector, as well as undertaking increasingly large construction jobs, will hopefully lead to the company taking the next step into new build projects, which is something it would seriously consider being part of its long-term plans, but for now the primary focus is reaffirming ASRY Offshore Services’ reputation for being the best.”