A work in progress

A part of the VTTI Group, which provides it with the very best team of experts and the necessary support mechanisms, ATB Oil Terminal is a grass-roots project that began construction in September 2009.

The first phase of this undertaking involved the incorporation of 41 oil storage tanks, totaling 900,000 cubic metres of storage for fuel oil, gasoline and middle distillates, and has been fully operational since April 2012.

With this phase of the terminal complete and fully leased to various customers, the company’s management already finds itself in the midst of planning for the second phase. This will add an additional 220,000 cubic metres of storage, with the ultimate goal being to have a site that boasts 1.7 million cubic metres of storage capacity. Significant pre-investment has already been made in land improvements and infrastructure to ensure that phase 2 can be ready in the soonest possible time.

“The ATB terminal has unquestionably set a new benchmark in the independent terminal industry,” states managing director, Eric Arnold. “Designed to meet the highest industry and safety standards, without compromising on the demanding storage requirements of oil traders, the terminal offers some of the best levels of flexibility, product security and load rates available anywhere in the commercial storage market.”

The leading petroleum trading organisation in Asia, the Vitol Group, one of VTTI’s two owners, has a long-term commitment to retaining its position at the forefront of the industry. This commitment has driven it to forge a strong storage position in Singapore for more than 20 years, thus it proved only natural that when the opportunity presented itself, Vitol chose to make use of VTTI’s proven ability to build and operate world-class petroleum facilities. 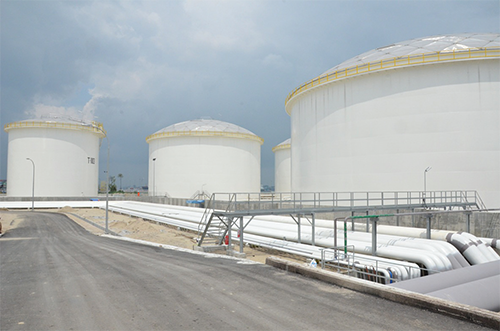 “In addition to reducing exposure to the storage rental market, the building of a custom-built terminal, designed specifically for trading and blending activities, provides vast improvements in blending capabilities, turn-around times and flexibility,” Eric continues. “VTTI has assets in all key trading locations around the world, yet it chooses these locations and participations carefully, always taking into account what will best benefit its customers.

“The group’s projects are strategically located at key shipping crossroads and busy ports, allowing it to connect relevant regions and offer better flexibility. Constructing a terminal in such an excellent location, next to the Asian trading hub of Singapore, has indeed opened up a host of regional distribution opportunities.”

“On April 10th, 2012, the company received its first cargo oil tanker, which safely and successfully discharged at its VLCC berth,” Eric highlights. “In the subsequent 40 days ATB handled 2.5 million metric tonnes of cargo and more than 40 vessels. While that pace is significant, it actually represents only the ramp up period. Full operation rates are now expected to be achieved in July when the terminal is expected to be able to handle at least 60 vessels each month.”

Taking a brand new facility from zero to full operation in a matter of weeks, as apposed to over the course of many months, has understandably been a challenge of huge proportions: “Fortunately, the task at hand was made much easier through the support of the entire VTTI organisation,” Eric explains. “ATB was able to draw on support from its parent company in the fields of engineering, commissioning, IT and operations in order to get the facility started in the minimum amount of time, whilst doing so in line with the strictest of quality and HSE standards.

“With phase 1 complete, there is now scope to double the facility’s current capacity, with phase 2 designed to add an extra 220,000 cubic metres for the storage of petroleum products and chemicals. ATB has already received a number of expressions of interest for this fresh capacity and, with soil and recovery work already complete,bid invitations to four contractors are about to be issued prior to foundation work that will begin in early 2013.”

Clearly the cost advantages of the location, combined with the superior capabilities of its new terminal, has generated significant interest in VTTI’s storage rental services, with the group believing itself to be in a perfect position that leverage that interest into new tank capacity at ATB. This is just one example of VTTI’s ambitious growth plan, one that encompasses all of its global assets, from its existing terminals in places like Rotterdam to developing locations like Mombasa in Kenya.

“In a market where storage contracts are likely to remain under rate pressure for some time to come, ATB is well positioned to benefit from the strategy it shares with VTTI of low cost structures and highly efficient operations,” Eric highlights. “This position makes ATB the terminal of choice in the region and that advantage will only be amplified in a weaker market.

“With the full support of its parent company, ATB management will hereby continue to take advantage of its strong cost position and its unmatched operational capabilities to further expand the facility. The goal at the end of the day is for this facility to be able to comfortably handle 40 million tonnes of cargo per year and it is the company’s belief that it is well on its way to achieving this.”