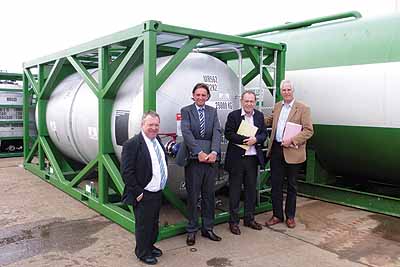 Since the company was founded in Great Yarmouth during 1983, ATI Tank Hire has developed a market leading and trusted reputation in the supply of storage tanks across the UK and beyond. Today the business is owned and guided by its Director, Charles Lumsden, who first became involved in the company during 1992, before taking a controlling interest in ATI Tank Hire in 2006. Since that time Charles has helped to galvanise the business and under his stewardship it has continued to grow from strength to strength. “I took over ATI more by accident than by design,” Charles reveals. “During that time there were just eight members of staff and 154 tanks. However, almost half the tanks were in such a degraded state they were no longer capable of being deployed. My first impression was of everything having been run down – the yard was unswept and the tanks unpainted. For example, the yard was not concreted, just gravel, and therefore muddy in winter and dusty in summer. So a priority was to move to a concreted yard – one capable of storing heavy equipment.”

As the business continued to develop, it quickly began to revitalise its service offering to match the investment that had been made into the company’s premises. The result was a storage tank portfolio and service offering that is designed to meet the demanding requirements of a vast spectrum of clients. “Initially funds were very tight – that was the reason I had become involved in the first place. So we started small by focusing on what have become my mantras over the years – ‘get the culture right’ and ‘put the client first’,” Charles explains. “At a basic level, this meant understanding our clients’ requirements and getting clean and usable tanks to them on time. Today a core feature of our business is that we service multiple sectors, both onshore and offshore. We therefore need to maintain a wide range of tanks so ATI Tank Hire has expanded its range to be able to service specific needs and sectors, for example the construction and environmental sectors. In 1995, we started customising tanks for our clients and this is now key to our operations.” 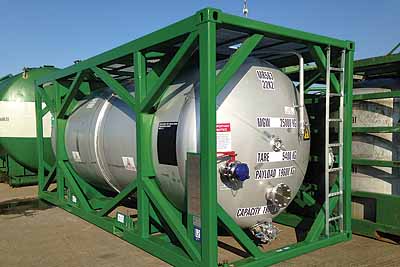 In line with its strategy to provide tanks to a broad base of industry sectors, ATI is able to deliver a host of products with an equally diverse range of specifications to meet the specific requirements of each client. As such, its tanks are frequently employed by clients based within the UK as well as Europe and deployed to regions as far afield as Africa, Canada, Trinidad and South America. “We supply a range of tanks across a spectrum of industries and many tank designs that straddle several applications including oil and gas. In fact there is no tank that is specifically for a single industry as they can all cross over as required. These include standard horizontal tanks, which can be as small as 2m3 and as large as a 100m3,” elaborates Operations Manager, Justin Faraday-Drake. “We also have vertical tanks, which are good for storing products on site as they have a low footprint and these can range from 8m3 to 60m3. ATI also provides open topped tanks, which are used for applications like the separation of sand and silt and these range from 3m3 to 38m3. The tanks used in the offshore sector tend to be DNV certified chemical tanks, ranging from 1m3 to 19m3. A lot of our horizontal tanks are used in offshore environments as they can be skid mounted and lift tested for offshore application.”

Throughout all of its operations ATI Tank Hire is committed to achieving excellent health and safety as well as adherence to both national and international levels of certification. “Health and safety has always been a priority and, by aiming for the higher certification, we ensure that health and safety matters are fully addressed. For example, no individual ever works alone on a tank,” Charles says. “In order to comply with international standards it was decided to adopt Norwegian certification for our tanks, and continue to do so to this day. Norway has more severe weather conditions than the UK so, by certifying our tanks to the Norwegian standard DNV, we ensure they are more than equipped to cope with offshore UK conditions. In all, this certification process took some eight years in total.”

Despite enjoying strong positive momentum in the growth and development of the business in recent years, ATI Tank Hire shows no signs of slowing down. For example, the company has recently expanded its products range through the delivery of two 19,000-litre storage tanks, which incorporate ‘Liftfull’ capabilities, meaning that they can be lifted when full without having to be emptied. The introduction of these unequally sized tanks further strengthens the ATI Tank Hire product portfolio and embodies the company’s dedication to meeting the needs of its customers. “Prior to the acquisition of these tanks there was a gap in what we had in our portfolio,” Justin says. “Increasingly clients require DNV certified tanks, which was something that we only had in our smaller tanks, so it was important to have larger tanks available with DNV certification.”

Further to an increased strength of its product portfolio, ATI Tank Hire has recently also taken the decision to expand its presence by opening a storage depot close to Aberdeen, which is set to go into service in the near future. “The new storage facility will be situated in Laurencekirk, close to Aberdeen,” Justin reveals. “We realised that it was costing our customers a lot of money to transport tanks from here to Aberdeen, so we decided to open a storage facility to lower the cost of transport to clients.”

ATI Tank Hire has enjoyed a significant development and investment in the nearly two decades since Charles became involved with the company. An energetic and professional team that benefits from an in-house training programme and ensures that ATI is on hand to deliver the right solution as and when it is needed, means that the future of the business remains potentially very exciting. “When I started my career in merchant banking I did not expect to end up owning several thousand tons of metal. However, being in a ‘real’ business and seeing at first-hand how the different sectors adapt to economic conditions keeps me on my toes,” Charles concludes. “As for the tanks – well, sometimes it feels as if they’re part of the team as well.”