Back to Profile Gallery > Atlantic Marine

Atlantic Marine is a UK-based offshore and subsea vessel expert, operating as a global business.

The company is part of a group with a wealth of expertise across air, sea, and property. As of 2012 the new face of this rapidly expanding business is Atlantic Marine and Aviation LLP, which comprises three main sectors – commercial shipping, yacht management, and aviation.

“The commercial shipping sector is purely engaged in chartering vessels that are fully managed and crewed,” begins managing director Paul Crowther. “In particular we specialise in offshore support and supply vessels, as well as survey craft. The smaller side of the business is our yacht management division where we offer crewing, management and charter services for 30 to 80-metre vessels, primarily within the Mediterranean. Finally we have the aviation sector, where we own and operate private jet aircraft for charter.”

Today perhaps 70 per cent of the business is commercial shipping, with the other two sectors making up the remaining 30 per cent. As Paul explains though, this wasn’t always the case: “In 2003 we virtually closed the commercial shipping side in order to expand the yachting and aircraft businesses. Then in 2009 several companies in the offshore wind sector approached us due to our expertise in 50 to 90-metre vessels, and the fact that there was something of a gap in the market for that type of vessel. We acquired the first vessel of our new fleet, the Atlantic Guardian, in early 2010 and from there we have gone on to purchase five more ships.”

Most recently this has included the Atlantic Wind and Atlantic Carrier, which came into the fleet in 2012, joining the Atlantic Cougar, Atlantic Surveyor, Atlantic Rescue, Atlantic Guardian, and SB Kitty. “Our unique selling point is that each one of our vessels is multipurpose with its own unique capabilities,” notes Paul. “Every vessel is capable of doing something different to its sisters in the fleet. Our model is based upon purchasing older tonnage that is in a good condition and then putting a lot of investment into the vessel at the outset to make it as multipurpose as possible. This enables us to offer extremely competitive rates of between 20 and 30 per cent less than anyone else in the marketplace for our particular vessel.” 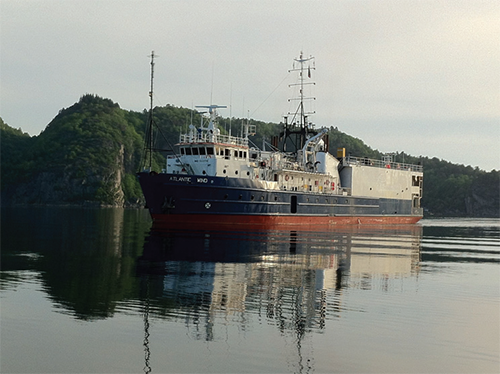 Although the offshore wind sector was the original driving force behind Atlantic Marine’s re-entry into the commercial shipping market the company has also been busy in the oil and gas sector. Last year the Atlantic Wind was involved in seismic survey operations in the Barents Sea, whilst the Atlantic Guardian was operating as a rig supply vessel in the gas fields of the southern North Sea.

“A very different thing about our company is that we are fundamentally service driven,” highlights Paul. “Our structure is designed so that we actually go onboard the vessel to meet and work with the client rather than in an office based environment. As such, we are a virtually paperless company with all vessels connected using VSAT broadband. All management tasks are handled in-house including safety and crewing, primarily using European seafarers.”

For the first six months of this year Atlantic Marine is focusing upon consolidation and the completion of several conversion projects amongst its vessels. This includes the Atlantic Wind, which is being converted from a specialist seismic source vessel to fit a much more multipurpose role. “We are fitting her with transfer systems and general survey equipment such as an hydraulic A-frame so she can offer survey spreads for the oil and gas, and wind sectors. We’re also entering the cable installation market later in the year due to the award of a major charter with E.ON to install inter array cables on the Humber Gateway wind farm project. This will involve the conversion of the Atlantic Carrier into a cable laying vessel,” explains Paul.

The company also exhibited the Atlantic Cougar at Oceanology 2012 with a focus on the vessel’s groundbreaking design for personnel transfer to the bows. It also employs a number of other specialist capabilities to cater towards the demand that Atlantic Marine sees coming for large offshore catamarans capable of servicing the Round 3 wind farm developments, and supporting installations further offshore.

“The Atlantic Cougar is fitted with a dynamic positioning (DP) software system that we developed in-house in conjunction with a software company in Sweden,” describes Paul. “This gives us the ability to put bespoke solutions onto the vessel where we can actually tailor the software to the client’s requirements which you can’t do with an off-the-shelf system. It’s also an extremely cost effective way of offering DP tonnage to the market at around 50 per cent less than the nearest average rates.”

Such has been the success of this investment that Atlantic Marine has now fitted the Atlantic Surveyor with the same DP software. The company is not stopping there either in terms of investment into its vessels as it aims to strengthen its position in the market. “Later in the year our expectation is to purchase further tonnage with the aim of one or two 70 to 90 metre offshore vessels. We feel we have cornered a particular market niche with our lower cost and well-maintained tonnage combined with excellent service, and we want to continue to build on that,” concludes Paul.